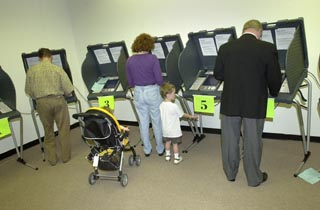 Voters cast ballots Tuesday in the last day of early voting. Election day is Saturday. Please go participate in your democracy before somebody takes it away from you. (Photo By John Anderson)

Quote of the Week: "The one population not represented on the floor of this body right now, the group that will never be heard from at this podium, is the mentally retarded." -- The exceedingly kind Rep. Carlos Uresti, D-San Antonio, speaking on the House floor against plans to privatize state mental hospitals.

It's almost over! The City Council election is Saturday. Early voting ended Tuesday with a total of 22,152 votes cast (which means turnout so far is 4.7%). See "Down to the Wire" and "Austin@Large."

The Texas Senate passed a state budget that, while not as draconian as the House version, still leaves hundreds of thousands of Texans without health care and still relies on money that may not exist. See "On the Lege".

And speaking of babies, congratulations to former Council Member Bill Spelman and Planning Commissioner Niyanta Spelman, whose son Ronan was born this week.