The Statesman-spawned toxics crisis is finally over, but threats to Austin water quality remain. 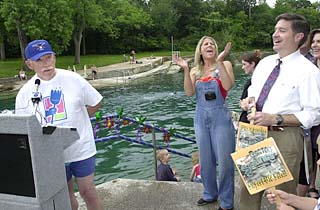 After receiving final notice from state and federal health agencies that no, the water in Barton Springs Pool is not liquid cancer, City Manager Toby Futrell reopened the pool for swimming on Saturday with a festive ceremony that included live music, an Easter egg toss into the water, and an ugliest bathing suit contest. (Both Futrell and Council Member Will Wynn took a dip in the brisk springs waters -- the latter fully dressed.) Several celebrating members of the city staff passed out fans that read, "superfun site" -- a pun directed at the Austin American-Statesman's comparisons of readings taken from a hillside near the pool to a Superfund site.

The Statesman's coverage was the catalyst for Futrell's decision to close the pool in January for a 90-day period and to seek a health-risk analysis from the Texas Dept. of Health and the federal Agency for Toxic Substances and Disease Registry. The results of the agencies' investigations, released last week, assert that although chemicals were detected, they "do not pose a health threat to users of the pool."

To reach their conclusions, the state health department and the federal ATSDR reviewed over 14,500 individual data points amassed over the past 12 years, including recent water and sediment samples collected by the city. The agencies whittled down a list of reported contaminants to 27 for further consideration, including 20 varieties of polycyclic aromatic hydrocarbons (PAHs) and arsenic, which the Statesman alleged had exceeded safety levels. The agencies assessed the dangers posed by contaminant levels in the pool based on "conservative" assumptions, and in some instances compared these levels to public drinking-water standards. 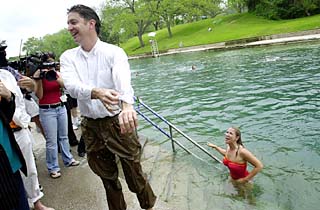 City Manager Toby Futrell, properly attired for a dip in Barton Springs, emerges from the water behind a fully clothed Will Wynn. (Photo By John Anderson)

The results showed that even people who swim in Barton Springs every day are not putting themselves at risk for any of the health conditions hinted at by the daily, including cancer, birth defects, or memory loss. The two investigating health agencies did notice high levels of contaminants in soil from a nearby hill, which they recommended that the city examine further. Joining the health agencies in investigating the situation at Barton Springs were the U.S. Environmental Protection Agency, the Texas Commission on Environmental Quality, and the M.D. Anderson Cancer Center.

Futrell called the pool's three-month closure a "painful" experience for the community -- one that cost the city at least $100,000 in tests, as well as an estimated $35,000 in lost revenue from the pool. News of Barton Springs' possible toxicity reached the national radar screen, causing her to worry that the pool's reputation had suffered. Furthermore, Futrell says, the Statesman's coverage -- which included what some city experts viewed as hyperbolic miscalculations of complicated environmental data -- damaged the morale of her staff and assaulted the credibility of the city's attempts to protect the springs. On top of the costs to the city, the Barton Springs crisis also cost state and federal agencies thousands of dollars and hundreds of hours of employee time.

Still, Futrell believes some positives resulted from the Statesman's "toxic" headlines. The city now knows it must make data about Barton Springs more accessible to the public, she says. Tests conducted on the hillside near the pool, including scrapings taken from parking lots upstream, helped the city identify coal-tar pavement sealants, flowing in runoff down to the Springs, as a likely source of PAH contamination. Now, she says, the city is meeting with U.S. Rep. Lloyd Doggett and EPA staff to discuss ways to address those sealants, which are made from recycled hazardous pollutants, yet are currently legal under state and federal law. TCEQ is also continuing its study of the hillside below the Barton Hills Park Place Apartments, which has a sealant-treated parking lot.

Futrell believes most Austinites "did not concur" with the Statesman. One Austinite who has seriously analyzed and questioned the daily's reportage is Council Member Daryl Slusher, who so far has written two detailed reports analyzing conditions at Barton Springs and Barton Creek; a third is due soon. In his latest report, Slusher calls for a regional plan to protect the Barton Springs Watershed -- a project he's hoping to realize with the help of Hays Co. officials -- and for households and businesses located over the Barton Springs zone to stop using polluting chemicals on their lawns.

While talk of pollution, chemicals, and contaminants took a back seat last weekend to splashing and celebrating for the first time in three months, city officials and local environmental organizations -- most notably the Save Our Springs Alliance -- caution against losing sight of the pool's generally deteriorating water quality. The alliance enthusiastically took a lead role in spreading the word about the pool's reopening, but SOS continues to emphasize the evidence that the pool is increasingly polluted -- silt on the bottom of the springs, algae, and contaminants threatening to the Barton Springs salamander and other aquatic species.

"While we are celebrating, it is not over," said Futrell. "You have to be vigilant and diligent in protecting urban water quality."