A setback for Sixth + Lamar, a victory for keeping Austin weird 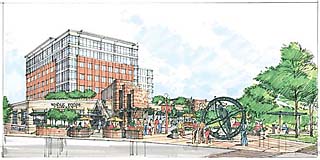 Artist rendering of the proposed Sixth + Lamar project, viewed from the intersection of those two streets

The five-year saga of Austin's most controversial retail project took another sharp turn Wednesday as Borders Books and Music announced it was abandoning plans to build a location in the proposed Sixth + Lamar development -- across the street from local indie-biz icons BookPeople and Waterloo Records.

Borders Group Inc., based in Ann Arbor, Mich., attributed its decision in part to the generally slow economy. The company announced earlier this month that sales at both its Borders and Waldenbooks stores were down significantly for the first quarter; in a conference call with Wall Street analysts, Borders CEO Greg Josefowicz suggested the chain would be slowing down its expansion pace and reconsidering previous plans for new stores.

In addition, Borders executives were reportedly not happy with Schlosser Development's changing vision for Sixth + Lamar. The development was first conceived (and known as the Austin MarketPlace) in 1998 as an urban, multitenant, pedestrian-oriented retail mall. But after years of failing to break ground, Schlosser has now reinvented Sixth + Lamar as an office/retail project dominated by the flagship store and corporate headquarters for Austin-based Whole Foods Market, currently housed across Sixth Street next to BookPeople.

The Sixth + Lamar project had been entitled to more than $2.1 million -- and has already received over $700,000 -- in fee waivers and other incentives under the city's Smart Growth program. Therein lay the controversy: BookPeople and Waterloo, along with many other independent businesses, activists, and community leaders, cried foul at City Hall's giving incentives to a project that would include a national chain store competing directly for customers. "It's always been about the fee waivers and incentives, not about the competition," says Waterloo Records owner John Kunz. "I've always admired and respected Borders as a competitor and as a very savvy retailer."

The quality-of-life nonprofit Liveable City, led by high-profile Austin progressives like Robin Rather, Bill Spelman, and Mark Yznaga, has for months helped lead the charge against Borders at Sixth + Lamar. In a study commissioned by Liveable City, local analysts Civic Economics claimed Borders would siphon off at least $11 million in revenue from BookPeople and Waterloo over five years; that each dollar spent at the local stores would generate three times as much Austin economic activity as would a dollar spent at Borders; and that even if the Borders lost money, it would still take a bite out of BookPeople and Waterloo's bottom line. Liveable City then last month made specific recommendations to the City Council, including the blanket position that "incentives should not be given to any aspect of this project as long as Borders is part of it."

The Sixth + Lamar flap has become a flash point for a community focused on "keeping Austin weird" and "keeping Austin Austin" during its volatile years of boom, bust, and change. At least two candidates in the current mayoral race, Max Nofziger and Marc Katz, point to Sixth + Lamar as a major issue for their campaigns; Nofziger says Sixth + Lamar was what galvanized him to enter the race in the first place.

Calling Smart Growth "one of the most visible, most colossal failures of public policy that's ever been in this city," Nofziger says "Waterloo Records and BookPeople are in the crosshairs of the city giving money to Borders to come into that area and put them out of business." For his part, Katz -- whose eponymous deli is also a local indie-biz landmark near Sixth and Lamar -- says "The government can't create a Waterloo Records or a BookPeople or a Katz's. If the taxpayer wants to shop at Engulf and Devour, that's okay. But it's not up to city government to make that easier and more convenient."

Artist rendering of the proposed Sixth + Lamar project, viewed from the intersection of those two streets

Schlosser has responded to the growing criticism of its project and of Borders with some assertive PR designed to highlight the firm's own image as a progressive developer, itself a small local indie business, helping to build a community-friendly Downtown. (Schlosser's image-building included sponsoring the appearance of creative-class guru Richard Florida at the South by Southwest Interactive Conference last month -- at which, ironically, Florida railed against the "malling of America" with generic big-box retail.)

Partly in an attempt to defuse the controversy and hang onto its Smart Growth incentives, Schlosser has tried to reframe Sixth + Lamar as two separate projects -- the Whole Foods part and the Borders part -- and has argued that "the retail component is independent," in the words of Schlosser spokesman Gregory Kallenberg. Only the Whole Foods project, Schlosser claimed, would benefit from the city's incentives.

While Schlosser critics found this maneuver to be disingenuous, it's true that Whole Foods itself has been largely kept above the fray at Sixth + Lamar. Citizens and leaders who are generally opposed to Smart Growth have publicly questioned why Whole Foods, a profitable, fast-growing multimillion-dollar enterprise (and itself an aggressive national chain like Borders, though locally based), would need incentives to expand. But Liveable City, in an April 7 letter to Whole Foods CEO John Mackey, wanted "to make clear that we are not in any way against Whole Foods as a company or against your headquarters location." And Waterloo's John Kunz says, "We've had a couple of blocks of vacant land across from us for some time, and we're looking forward to Whole Foods going over there and to whatever else" may become part of Sixth + Lamar.

By itself, Schlosser's Whole Foods project would probably pass muster on City Hall's most current criteria -- outlined earlier this month as part of the work of the Mayor's Task Force on the Economy -- for awarding city incentives. The task-force guidelines note that incentives should encourage existing economic activity and be given to projects consistent with Austin's "community values" and "strategic goals for overall development."

In recent weeks, Council Member Betty Dunkerley, who co-chairs the task force, has floated a proposal that would give incentives not to Schlosser but directly to Whole Foods to spur job creation -- the expanded store and HQ, as they service the chain's continued national growth, are expected to house up to 400 new Downtown jobs, including well-paying management gigs as well as frontline service work. "We don't want to get into the habit of incentivizing any kind of retail," Dunkerley says. "You should only give an incentive when you're going to get a huge benefit to the community."

The uproar over Sixth + Lamar appears to have clearly influenced City Hall's emerging economic development policy and the politics that go with it. "The citizens and community were outraged at the thought we'd be giving incentives to nonlocal businesses and pitting against local businesses," says Kunz, who along with Robin Rather and BookPeople's Steve Bercu contributed to the work of the Mayor's Task Force. "I think City Hall gets the message and they'll do the right thing."

While Borders pointedly made no reference to the controversy in its announcement to drop its Sixth + Lamar plans, the move is still widely seen as a victory for BookPeople, Waterloo, Liveable City, and the other forces arrayed against the project. In a statement released Wednesday, Liveable City says it "appreciates Borders moving away from the Sixth + Lamar site. This gives the community more time to find a more positive alternative for that site and Downtown in general, and it gives Austin more time to find ways to protect our local independent businesses as we pursue job creation in the central city."

Liveable City plans to develop ways to educate consumers on how to best spend their dollars and (as highlighted in the Civic Economics study) the bottom-line benefits of patronizing local independent retailers rather than chain stores. Meanwhile, BookPeople's Bercu says Sixth + Lamar has done much to both highlight and galvanize Austin's independent businesses. "In many ways," he says, "it's been a really positive thing that has happened."