May 3 a Turning Point for ACC 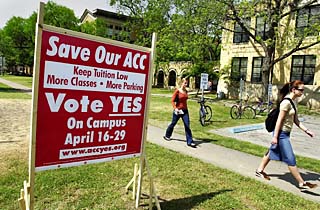 Rafael Quintanilla (top): "If ACC is turning people away, the economy suffers."

This is a tough time to be asking for a tax hike, but Austin Community College students and faculty are cautiously optimistic that the college's two propositions on the May 3 ballot -- a tax increase and a bond proposal -- have a good chance of passing.

In part, that's because students like Shirley Martínez hardly need convincing that ACC plays a critical role in the Austin community. Two years ago, Martínez was working a dead-end cafeteria job and spending most of her paycheck on child care for her two children. A high-school dropout, Martínez felt trapped until a friend told her about ACC's Capital Idea, an adult job-training program. Capital Idea paid for her child care, transportation, and tuition costs, Martínez is close to finishing her associate's degree in electronics and plans to continue at UT. Now she spends her days working to get voters out on behalf of ACC. "This program has allowed me to turn my life around," she said. "If ACC's funding is cut, then tuition will be raised and classes cut. That means that Capital Idea won't be able to continue to send 600 students to ACC. Degrees will cost more, and they will take a whole lot longer."

ACC has been struggling for years on meager resources, but things are about to get much worse. The school's $104 million budget comes primarily from three sources: the state (37%), student tuition (35%), and local property taxes (24%). But those proportions are changing. In January, Gov. Perry ordered all state institutions to cut budgets by 7% -- and since the cut came in midyear, it was effectively twice that.

Rafael Quintanilla (top): "If ACC is turning people away, the economy suffers."

For ACC, that meant cutting $3.2 million from an already-slashed budget. The school froze hiring and travel and technology purchases, reduced advertising, and delayed a payment into the reserve fund. Next year's cuts are likely to be even more drastic, since the Legislature's current budget calls for an additional 12.5% reduction and a 63% cut in state support for employees' health insurance. ACC expects to lose another $11 million, enough to completely alter its services to Austinites. Last fall, the college turned away almost 4,000 students; that number would grow considerably. "There is a real sense of urgency about passing the referendum," says ACC board Chair Rafael Quintanilla. "In tough economic times, individuals need an affordable way to retrain and land on their feet. If ACC is turning people away, the economy suffers." Indeed, a recent state comptroller's analysis concluded that every state dollar invested in higher education returns about five -- in higher incomes for graduates as well as savings in social costs for unemployment, welfare, crime, and health care.

At $32 an hour, ACC in-district students (Austin, Leander, and Manor ISD) already pay nearly the highest tuition in the state -- out-of-district students pay $96. Unless local tax revenue makes up for the cuts in state funding, the school will need to raise tuition considerably and cut classes from some of their most expensive programs, like nursing and semiconductor manufacturing. "There is talk of raising tuition by as much as $30 per credit hour," said trustee John Worley. "That would be a barrier for low- and moderate-income students. We have already lost working students to hard times. And nursing is a program that people really depend on [and] the community relies on for health services. But it just doesn't make sense to cut other programs where we are already breaking even."

There are two separate proposals on the May 3 ballot. Prop. 1 is a tax referendum that would, over the next three years, increase the property tax cap by 4 cents per $100 in property value -- $40 a year for a $100,000 house. This money would be enough to head off crisis and allow ACC to gradually expand its most popular courses, like health sciences. Prop. 2 is a $99 million bond issue for campus renovations and additions -- it would allow the college to buy its Rio Grande campus from Austin ISD and renovate it and to build a badly needed parking garage. The bonds would be repaid with a separate 1-cent tax increase.

A similar proposal failed in 1999, in part due to soaring property values and property tax pressure from local school districts, and to a very public feud between the faculty and the administration of President Richard Fonté. Because of the internecine problems, English professor Joe Lostracco himself opposed the 1999 tax proposal, but says this time he and his colleagues are on board, and not only because Fonté has announced his resignation effective at the end of the year. Lostracco says it was last year's comptroller's audit that really made the difference, vindicating many faculty complaints and forcing changes from the board and administration. A major administrative restructuring, the "One-College Plan," has been modified so that staff at the various campuses get more support, and the Downtown Education Center, never popular with students and a drain on resources, is finally being closed. "There is a lot less energy being spent on internal conflicts these days," says Lostracco, "and I think most of us are feeling a lot better about the institution."

The current crisis has inspired newfound cooperation, but there are also new barriers. The recession is likely to make voters hesitate on new tax proposals, and property values remain high. But ACC has been engaged in an aggressive education and registration campaign, adding around 1,700 new voters. There are early-voting centers on campus and the college's political action committee, the Friends of ACC, has been enlisting volunteers for the get-out-the-vote effort. "This has really set a fire underneath the students," says Scott Stewart of the Student Government Assoc. "Even if it doesn't pass, the student body has become a lot more motivated, and we have become closer to the administration. We have won either way."

The relentless news about budget cuts -- from children's health care to mental institutions to public schools -- has been daunting, and ACC's appeal may fall on exhausted ears. Yet on May 3, Austin voters may not be able to balance the Texas budget, but they will have a chance to protect one vital local institution from the general carnage.