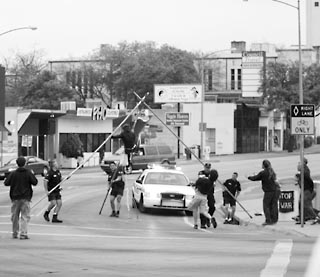 Last week eight protesters were arrested for setting up two tripods and a 25-foot banner reading, "How many lives per gallon?" at the intersection of Guadalupe and MLK. The group was arrested within minutes of launching its action, and charged with obstructing a roadway, a Class B misdemeanor. In dismantling the tripods -- manned by two female demonstrators -- APD did not use a net but simply pulled the legs outwards, causing one demonstrator to fall. The officers did not call EMS to the scene, but cuffed the demonstrator and carted her away. The other demonstrator voluntarily dismounted her tripod in order to avoid injury. (Photo By Jana Birchum)

Quote of the Week: "Texas is not like Wimpy, a bloated slob always munching on hamburgers. Texas is more like Popeye's skinny girlfriend, Olive Oyl, whose 19-19-19 figure indicated a diet that barely kept her going day to day." -- Dick Lavine of the Center for Public Policy Priorities, after Gov. Rick Perry made a tired "I will gladly pay you Tuesday ... " joke. See Beyond City Limits and A Lege Too Far for more on the state's budget funnies.

Speaking of Will Wynn and money, he raised the most of it -- $104,444, to be exact -- in the latest round of campaign finance filings in the May 3 City Council election; see Candidates, Money Both Talk.

UT's Harry Ransom Center announced its latest coup -- acquiring the Watergate notes of Washington Post heroes Bob Woodward and Carl Bernstein. The papers, which cost the HRC $5 million, are supposed to be opened for public use by next March -- with some exceptions, including documents confirming the identity of Deep Throat.