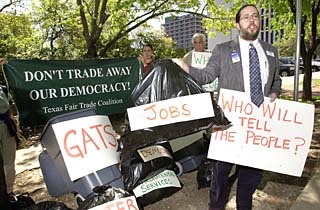 Representatives from the Statewide Fair Trade Coalition convened in front of the Governor's Mansion on Monday to protest the General Agreement on Trade in Services negotiations currently under way in the World Trade Organization. Here, Bruce Banner from Education Austin, a coalition member, throws trash bags labeled "Jobs," "Democracy," and "Environmental Services" into a trash can to signify the effect that GATS-required privatization may have on local and state governments. The coalition says that these local and state governments are being kept out of the loop in GATS negotiations. (Photo By John Anderson)

Quote of the Week: "I come to support this bill and keep God's team in Dallas County." -- Dallas Co. Judge Margaret Keliher, testifying on behalf of a tax bill to create a new stadium for the Cowboys. See God Wears Silver and Blue

Actually, God is smiling on the Texas Tower this week, as the Longhorns and Lady Longhorns both made the NCAA Final Four -- the first time both basketball teams went to the Big Dance in the same year. (The men haven't been since 1947, the women since 1987.)

Today (Thursday) is the last day to register to vote in the May 3 election, featuring races for Austin mayor and three City Council seats and a critical tax/bond vote for Austin Community College. Register in person at the Travis Co. Tax Assessor-Collector's office at 1010 Lavaca, pick up an application at any post office or Austin Public Library branch, or register online at www.texasonline.state.tx.us/travisco/voter/home.htm.

Speaking of the election, today is also the deadline for the first campaign finance reports ("C&Es") in the City Council races -- which, given Austin's $100 contribution limit, will mostly show how much of their own money the candidates have spent. For more on the mayor's race,, see Mayor's Race Livens Up.

Money rained down from heaven upon Texas House budget writers, who claim to have discovered $2.7 billion under the sofa cushions to save health and human services programs. See Cash Falls From Sky at Lege.

Next week's City Council meeting, April 10, will feature (at 6pm) a public hearing on Mayor Gus Garcia's controversial draft smoking ordinance, which would ban lighting up in bars, restaurants, and almost all other public places in Austin. More on this next week.