Mental Health Care Meltdown: Is There Room for Hope? 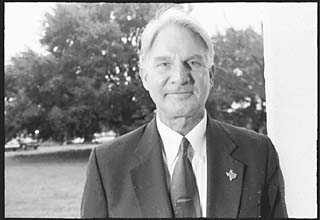 Joe Lovelace of the National Alliance for the Mentally Ill wants MHMR to focus on disease management, not crisis management. (Photo By Jana Birchum)

Will Travis County's mental health care system take flight or remain mired in trouble? While a recently released Austin Police Dept. report offers practical, if not substantial, recommendations for reform, statewide budget cuts may make any near-term improvement difficult. Still, some health care advocates are optimistic that things can get better this session -- if the state's mental health mission is slightly redefined.

Last month, Austin Police Chief Stan Knee's task force on mental health submitted its final report on the state of Austin's mental health care system. The task force was convened in the wake of the June 2002 shooting death of Sophia King and initially charged with reviewing and making recommendations for strengthening APD officer training on mental health issues. But according to the report summary, task force members -- representing law enforcement, the Austin/Travis Co. Mental Health and Mental Retardation authority, and Brackenridge Hospital -- decided early on to supplement the group's mission. "[I]t became apparent that reviewing the [APD training] curriculum without a critical look at the interface between law enforcement and crisis mental health services would not adequately address the complexities" of the issue, the report reads.

Apart from recommending "refresher" training for APD officers and new training for dispatchers and patrol supervisors, the task force laments the lack of local crisis-stabilization facilities, communication gaps between local mental health stakeholders, and insufficient funding. In short, the task force points out the obvious holes in the mental health safety net that local law-enforcement leaders have bemoaned for months, if not years. But local mental health advocates hope the report will provide at least some impetus for getting those holes patched up. According to APD spokesman Kevin Buchman, Knee has made the mental health issue one of the department's priorities for 2003. "With him, and with the department," says Buchman, "it's never been an issue that it is not the police department's job. We know things can be better."

Still, just how soon things may move forward in Travis Co. is unclear and may be determined by how much -- or little -- gets done this legislative session. Legislation to enable a local health care financing district is pending, and exactly how deep the Texas MHMR budget will be slashed is still unknown -- but rumors abound. At the committee level, House budget-writers have entertained the possibility of closing one MHMR state school and one state hospital -- the only way they can see to cut 12.5% out of the MHMR budget. Although no one has named names, rumors have focused on the Austin State School or the Austin State Hospital -- because of the pricey central-city land the facilities occupy, some of which MHMR has already made available to developers.

Still, even nervous mental health advocates think common sense will make moot this option: the State Hospital serves 36 Central Texas counties, consistently runs at capacity, and boasts one of the area's only inpatient facilities for adolescents. Advocates say it may make more sense to close one of the state schools, which have vacancies, but that budget-writers in the Texas Senate, unlike their House counterparts, have pledged there won't be any closings in the MHMR system.

Joe Lovelace of the Texas chapter of the National Alliance for the Mentally Ill says he and other advocates are trying to remain optimistic. They've crafted a proposal that would streamline the allocation of MHMR funds and redefine the MHMR mission to focus on disease management instead of crisis management -- treating mental illness with long-term strategies just as we treat other chronic illness, instead of tackling acute "episodes" of illness as MHMR, particularly in Travis Co., is now forced to do.

Without wraparound care and counseling, mental health consumers only get help when they are in crisis, which often results in contact with law enforcement. Lovelace said a disease-management approach -- including consistent medication, substance abuse treatment, and individual counseling combined with vocational assistance and social-skills rehabilitation -- would help to end "the state's reliance on the criminal justice system to engage and manage adults and juveniles with serious mental illness."

Lovelace admits the retooled approach may end up, at least in the short term, leaving some clients outside MHMR's doors. "But we can't perpetuate a failed system just because we can't have short-term pain for long-term gain," he said. Targeting funds for disease management would stop the local MHMR authorities from rationing resources so thin that they "override clinical judgments," he said. Four local MHMR authorities, including the Hill Country MHMR in Kerrville, are already testing the disease-management approach. "It doesn't turn as many people away," said Linda Parker, the CEO of Hill Country MHMR. "It gives us some flexibility in how we offer services."

Instead of just constantly "chasing people" to meet targeted patient-number goals, Parker said disease management targets "what it is you are serving." Hill Country is focusing on goals "that consumers actually want," she said. "Mental illness has been treated differently than physical illness, and that has created a dependency on the system." By focusing more intently on a wraparound management approach, Parker said, consumers can "graduate" from different levels of MHMR services. "Mental illness should be more fluid," she said. "We are trying to look at the whole person."