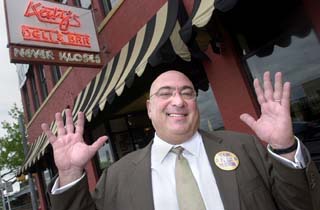 You know Marc Katz. But he suspects you don't know Mayor Katz. "I don't want people to think of me as just a flamboyant restaurant owner," says the longtime proprietor of the eponymous deli at Sixth and Rio Grande. "Running for mayor, having that kind of name ID isn't always an asset. The character that's 'Marc Katz' doesn't really fit into City Hall. But that's only one side of me -- and my accomplishments in the community, as well as in business, certainly show that."

That brings up the opposite question: Marc Katz is already famous, successful in business and in life, and (as a fundraiser and philanthropist for numerous local nonprofits) has made a substantial contribution to Austin's benefit. Why put that at risk by entering the political ring? "You can't just want to sit on the dais to satisfy your ego," he says. "It takes a lot of strength, and it will take a lot out of you. You need to mean business.

"But now is the perfect time for me to do this and be of service, as a leader, to the city I love," he continues. "My methodology, my way of doing business, is exactly what Austin needs right now."

"Living in the Solution"

Katz is hardly the first, and will hardly be the last, novice to ride into the electoral fray on his record as a business owner, declaiming that Austin (or wherever) needs to be run like a business. For Katz, though, this is a somewhat less generic stance -- he wants to run Austin like his business. "Running this restaurant for a quarter century, we've dealt with upturns and downturns and changes of every kind, and I've had to respond to them. You can't just make a decision that you'll make a guest come in more frequently or make your kitchen run more efficiently. You have to actually do the things that make those outcomes happen."

When Katz filed his (ultimately unsuccessful) court challenge to the city's $100 campaign contribution limit, he defined the move in these same terms: All the candidates, actual and potential, agreed the $100 limit was wack, but only Katz had the leadership to try to eliminate it. Such it is, he feels, on most issues -- particularly where his two officeholder opponents, Will Wynn and Max Nofziger, are concerned. "My opponents have been part of the problem and are living in the problem; they talk about the solutions but can't do anything to make it happen. I know I'll be living in the solution."

Katz's solutions are informed by the particular perspective of Katz's Deli -- a local independent business, a Downtown landmark, a 24-hour operation living symbiotically with the music scene (and attached to a club once owned by Katz himself), an institution that's survived several boom-bust cycles, and an employer of hourly wage workers who can't afford to live in the central city. More globally, though, and appropriately for such a successful self-promoter, "My biggest complaint, as someone who loves Austin, is that it's losing its brand," he says.

"Austin is supposed to be cool and hip, have a low cost of living, be an oasis of tolerance for different kinds of belief, and run on ingenuity and creativity with economic prosperity for everyone. I'm afraid we're moving away from that, and action needs to be taken to get us back on track. ... And part of how we got here is apathy -- we were so cool, and so right, and so on the money, that we rested on our laurels. As a businessman running a company as successful as this one, I know that's a danger."

Katz's platform is in league with much of the stump speaking of the other contenders -- he calls for "aggressive improvement of basic city services without soaking the taxpayer," and last week rolled out a proposal for "caps and cuts" (no, not "kaps and kutz" -- he said so himself), extending a homestead exemption to Austin property taxpayers and freezing tax increases for seniors. He's also called for a moratorium on outside consultants, for improvements to the transportation grid (including synchronizing the traffic lights), and a leaner-and-meaner City Hall, embodied in his campaign slogan, "Less Is More."

"That's the real deal," he says. "We need a leaner government, and we need to create the quality of government we have the right to expect. I see us settling now, but we have a right to expect more. And as a businessman, I can show Austin how to spend less and get more. Otherwise, I wouldn't be here."

By "here," he means at Katz's Deli. He also might not be here for an entirely different reason -- Katz is "a recovering narcotics addict and very proud of it. It was over 10 years ago that I got clean, I relapsed for three days in 2000, and [recovery] is the most difficult thing I've ever done in my life. After what I've been through running a business and living with a family while having an addiction, running the city seems relatively easy. I like being a role model for the alternative to jails and institutions and death, which is where drugs will take you if you don't get off. And if we were all excluded [from holding office] by our past, it would be a very small market."

It's not hard to see in Katz's recovery from substance abuse a parallel to Kirk Watson's recovery from cancer, spawning in both men what you might call a healthy impatience to get things accomplished by getting in the lead. But the results, were Katz to take his turn in the mayor's chair, might be very different. "There are some things the government just can't do," he says in relation to the Smart Growth Initiative. "The government can't create a Waterloo Records or a BookPeople or a Katz's. I have to stand out here every day and sell what I sell. If the taxpayer wants to shop at Engulf and Devour, that's OK. But it's not up to city government to make that easier and more convenient."