As an Iraq war becomes inevitable, local responses range from the stupid to the sublime. 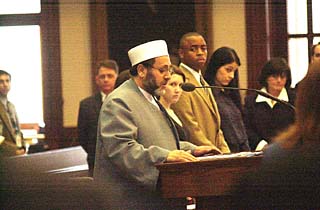 Tuesday's Texas House session opened with an unprecedented invocation -- offered in the name of Allah. Imam Moujahed Bakhach, from the district of Rep. Lon Burnam, D-Fort Worth, called on Allah for "peace … and the rule of mercy … to take us out of the weakness of our sins," for a world of "hope, peace, and security," and especially for wisdom. (Photo By John Anderson)

It was only a matter of time before the foes of Frenchdom focused their energies on the Eiffel Tower replica in front of Dreyfus Antiques, at the corner of MLK and Lamar. Earlier this week, a caller to KJCE Talk Radio 1370AM threatened to blow up the tower, now apparently a politically charged symbol of French opposition to the Bush war. Shop owner George Dreyfus didn't hear the threat himself -- "I don't listen to that station" -- but found out about it when people started calling him to deliver the news. He promptly removed the tower from its post as a safety precaution. "I didn't want to take the chance," he said.

Made in 1989 to commemorate the centennial of the Parisian original, Dreyfus' mini Eiffel has graced his storefront for five years. Dreyfus hasn't experienced any other threats to his business or safety and for now considers removing his Eiffel no big deal. "It's just about politics and narrow-minded people," he shrugs. -- Lauri Apple

Austin-based Fuddruckers announced Friday it's jumping on the "freedom fries" bandwagon, changing menus in its 220-plus restaurants to eliminate offending references to pommes frites. U.S. House members can also enjoy "freedom toast" for breakfast at their D.C. cafeterias. French gastronomes may be working up new names for lobster sauce (sauce americaine), but diplomats last week expressed little interest in what Yankees call their fried potatoes -- or, presumably, their braids, cuffs, kisses, twists, or ticklers. Up next: dubbing reruns of Family Affair to rechristen Sebastian Cabot "Mr. Freedom." -- Mike Clark-Madison

Does the USA PATRIOT Act facilitate FBI monitoring of public library patron records? And does it conflict with Texas law that keeps such records confidential? In Texas, prosecutors must show that disclosing library records is "necessary to protect the public safety," or that the record provides evidence that a patron committed a crime. All other records are off-limits. And even under the PATRIOT Act, patron records can only be released subject to subpoena. But the controversial anti-terror act does make it easier for the FBI to obtain their subpoenas or warrants. "All it has to show is that they're investigating some terrorist act," says Austin Public Library Assistant Director Tom Moran. The PATRIOT Act also includes a gag rule that prohibits library employees from disclosing the fact that the FBI has issued a warrant against an unsuspecting library patron.

If the proposed Domestic Security Enhancement Act of 2003 -- the so-called PATRIOT II -- is approved by the feds in its current form, law enforcement agencies could gain additional access to library patron records, potentially creating a civil-liberties nightmare. For instance, the ACLU points out, one section of PATRIOT II makes it easier for the feds to obtain nationwide federal search warrants -- they may not have to substantiate even the broad definition of "terrorism" in the PATRIOT Act. "Maybe people would challenge the PATRIOT Act under that basis," said Moran. The American Library Association, at its midwinter meeting in January, adopted a resolution opposing the PATRIOT Act's threats to privacy and calling on member librarians to defend patron privacy and intellectual freedom. -- L.A.

Charlie Jackson, head of Texans for Peace, spent most of January in Iraq as part of a Christian peace-building delegation. Now he plans to return to Iraq within the next few weeks to show Iraqi civilians, once again, that not all Texans want to bomb their country to bits. And if he gets caught in the war, he'll stay to work with local faith communities. "For many Iraqis, the few members of the peace teams may be the only contact they have with America besides the images of soldiers in camouflage and the impact of bombs raining down from above." Jackson needs help funding his trip; for more info, visit www.texansforpeace.org. -- L.A.

Culminating a week of nonviolent direct action in opposition to war in Iraq, local peace leaders are planning civil disobedience actions at the Federal Building, 300 E. Eighth, on Monday, March 24, at 12:30pm. The "Unholy Trinity Tour" moves from there to KTBC-TV (the Fox affiliate) down the street and then will culminate at day's end in front of the CSC complex, 200 W. Cesar Chavez, for a town hall meeting and "Reclaim the Streets" party. To learn more, e-mail iraqcampaign-austin@afsc.org or visit www.austinagainstwar.org.

Also, there are standing calls for protest action when the war begins (which may have already happened by the time you read this). On the first day of bombing, war foes are asked to gather at the state Capitol at 4:30pm, to be followed by a march at 5:15pm. On the day after bombing begins, there will be a noon protest on UT's South Mall, followed by a 24-hour vigil. For info on the latter, see www.ccpj.org.