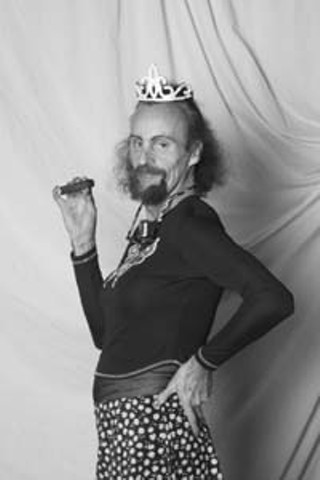 Like many mayoral candidates before him, Leslie Cochran kicked off his campaign by getting some new suits -- very sharp ones, befitting of a first-class stewardess (back when they were still called that) in the golden age of travel. Of course, the beard's gotta go. But he makes a fine impression nonetheless.

"I am not the homeless cross-dressing candidate," Leslie says. (I'll bet all the mayoral candidates say that.) "That really irks me. I'm the candidate for respecting Austin as it is. And if it needs to grow, it should grow with respect."

"Respect" is a word Leslie uses often, almost obsessively, to describe his vision for the city as he mounts his third mayoral campaign in as many elections. One supposes he knows something about disrespect, being (despite the disclaimer) homeless and cross-dressing and all that. But while Leslie Cochran may not for a long time become part of the mainstream, his politics are consistent with what you're hearing from the "legitimate" candidates -- right down to opposing two-way streets Downtown -- and I imagine could speak to the soul of the city. After all, if there's a Keep Austin Weird vote out there, shouldn't Leslie have it in the bag?

"You've got to take care of the foundations first," he says. "A little money to help (i.e., incentives) is fine, but Smart Growth is actually Greedy Growth. It's become a disaster, killing what we are so we can try to be like somewhere else. Disrespect to live music is being shown all over Austin. People are crying in the streets, groaning at the way things are going."

Well, yes, we know. So do the other candidates, and they're not lovable eccentric icons, or whatever Leslie is. "The biggest advantage I have," he says, "is that I don't have property interests or a law firm that would benefit from my being elected. I want to see Austin prosper, but I want to invite every kind of industry and individual that we can and build a diverse city."

This applies specifically to the Downtown stomping grounds he shares, after a fashion, with front-runner Will Wynn. "We have to control sprawl, but we can't put everything in Downtown and create adverse conditions for the industry" -- live music -- "that's already there. Stop Downtown residential growth unless it's soundproofed, and the sound ordinance just has to go. Just kill it. Let's spread these projects out and show respect for what we have already."

Though most everyone who runs in Austin claims more-than-the-ordinary love for the people, Leslie feels his have-not outsider status gives him the best claim to the populist agenda. (He called me last week, after Marc Katz filed suit to challenge the $100 limit, to complain that while the Statesman wouldn't print a word about him, they gave front-page play to "rich guys whining that they can't beg for more money.") "I'm gonna take 'of, by, and for the people,'" he says, "and add 'with.'" A key plank of his platform is a "mobile mayor's office," a sort of permanent listening tour around the city. "Bring out your issues!" he says. "I plan to be a 24-hour mayor."

Likewise, the fact that Leslie is Leslie, he says, makes him well suited to grapple the budget beast threatening to eat City Hall. "I'm a homeless guy with no money, so I'm a genius at finance," he says. "When I get money, I buy everything I need, and then I go have a beer. That's what we need at City Hall. Right now, we've got politicians getting in bed with corporate people to make their money. So I'm a good safeguard. As mayor, I can say what it is the people really need." He pledges "100% support," if elected, to City Manager Toby Futrell. "I have a lot of respect for her, being willing to come in and pay the bills the Greedy Growth people left behind. I guess it's true that behind every successful man is a successful woman."

The Meaning of Leslie

In my corner, I hear divided views on the significance, if there is any, of Leslie Cochran, and I can't say I know myself whether I'm doing the body politic a favor by treating him like the other "legitimate" candidates. Many Austinites love Leslie but see him as a harmless freak and would think no differently of his political aspirations were his views a lot less sensible and mainstream than they actually are. On the other hand, many Austinites actively dislike Leslie more with his growing fame and repeated political efforts, feeling that, since there's scant chance that even the Weirdest voters in Austin will pick a homeless guy in a dress, he cheapens the process and is in it just for the ego trip. But this presumes that other politicos -- men in (men's) suits with money -- aren't also attention-seekers with ego needs to gratify, a notion no less farfetched than Leslie's wardrobe.

Though it's admittedly incremental change, Leslie is moving toward a more conservative image, noting that he's gotten rid of his famous cardboard cart parked at Sixth and Congress. ("To protest the police department, I had a certain persona. But I've decided to go on and get out of that nest so the people can see who wants to represent them. They've seen my assets" -- he winks -- "and now they can see my talents.")

And, as we all know, Max Nofziger was a freak once too, by the standards of the time, and it took him 10 years to finally get elected, and now he's an elder statesman. But while Leslie insists he's running to win, he also doesn't plan to become a bore. After all, a man must have standards. "If I don't get 10% this time, then I don't know that I'd run again," he says. "I'm not Jennifer Gale."