Lawyers, Drugs, and Money: The Latest on Metabolife 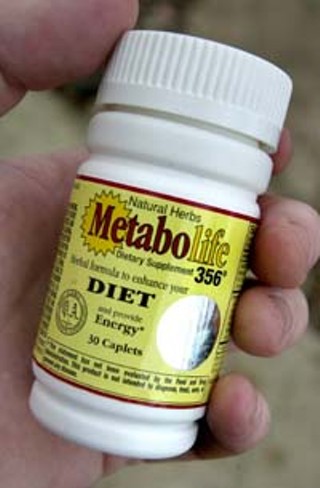 Ephedra is in the headlines again, following the death of a Major League Baseball player during spring training in Florida. Steve Bechler, 23, of the Baltimore Orioles, collapsed in Tampa Feb. 16 and died the next day of heat stroke. Bechler had been trying to lose weight and was taking a "nutritional supplement" called Xenadrine RFA-1, one of several dozen such over-the-counter supplements containing the stimulant ephedra or ephedrine (sometimes under the Chinese herbal name "ma huang"), often in combination with caffeine and other substances. Bechler apparently had additional health problems, but the Broward Co. medical examiner said his consumption of ephedra was a "significant element" in his death.

According to Karen Tannert, a pharmacist with the Texas Dept. of Health, ephedrine or derivatives like pseudoephedrine are regulated as drugs when they are sold in prescribed medicines or over-the-counter -- e.g., in asthma medications -- but in supplement form they are treated as natural herbs. Tannert says that ephedra, closely related to methamphetamine, is an "unpredictable stimulant -- and that's what makes it dangerous." She adds that because the TDH has received reports of adverse reactions at dosages lower than the manufacturers' recommendations, the agency declines to set a dosage level. "We feel there is no safe dose," Tannert said.

In the wake of Bechler's death, the U.S. Food and Drug Administration has recommended stricter regulation of ephedra, and Health and Human Services Secretary Tommy Thompson advised the public not to take it. "Why take the risk?" Thompson asked. That's quite a turnaround for Thompson, who only last fall attempted to dissuade the Texas Dept. of Health from imposing a requirement that all such products be labeled with an FDA "Medwatch" 800 number, simply to enable consumers to report adverse health effects. Thompson acted at the request of state Sen. Jeff Wentworth, R-San Antonio, whose district includes much of South Austin and who at the time was working as a lobbyist for the California-based Metabolife International through his law firm, Loeffler, Jonas & Tuggey.

Although other companies had already complied with the TDH requirement, Metabolife -- the largest marketer of ephedra-based supplements -- was dragging its feet. Wentworth and former Rep. Rick Green, R-Dripping Springs, were working the TDH commissioners and staff, while former Sen. David Cain, D-Dallas, asked the attorney general to intervene against the regulation. All of them failed, and the TDH said last week that Metabolife eventually complied. TDH spokesman Doug McBride says that the agency has no plans for new regulations, although it is "watching keenly" for any action by the FDA.

Wentworth and Green's efforts on behalf of Metabolife eventually came to the attention of Travis Co. Attorney Ken Oden, who said their conduct -- and perhaps that of a dozen or more other legislators -- appeared to violate ethics law banning nonpublic lobbying of state agencies by legislators. The two legislators said that while they disagreed with Oden's interpretation, they would abide by his judgment. (Green was defeated in November by Democrat Patrick Rose.) Several members of the Loeffler firm are currently listed by the state Ethics Commission as Metabolife lobbyists, but Loeffler sources confirmed to the Chronicle on Monday that Metabolife is no longer a client.

Oden recently retired from his Travis Co. post to take a job with the law firm Linebarger Goggan Blair & Sampson. Thereby hangs another tale. Just prior to stepping down, Oden referred a pending settlement of the Wentworth investigation to Travis Co. District Attorney Ronnie Earle, after discovering, by chance, that Wentworth receives an annual fee from Linebarger -- creating a potential conflict of interest for Oden. (The former county attorney is joining Linebarger to, among other things, advise the firm, which has been tarred by scandal in San Antonio, on ethics.) Oden says he didn't know about the Wentworth/Linebarger connection because it is not listed on Wentworth's financial disclosure statement filed with the Ethics Commission. Wentworth receives an annual fee from a contract the firm has with a Bexar Co. school district.

Asked about the omission, Wentworth said his Linebarger fee is not disclosed because "it is private, personal income to me" under a 20-year-old settlement with a predecessor firm to Linebarger, when Wentworth was in private legal practice. The ethics form requires disclosure of "any fee ... received for providing services ..." to any potential lobbyist, and Wentworth says he provides no services to Linebarger. Asked why Oden might consider such a relationship a potential conflict of interest, Wentworth said, "I just think he's overly sensitive."

Oden said he would "plead guilty" to that charge, but that any potential conflict would be a fact question to be determined by someone else. Since he was joining the firm, he said, "I'm not the right person to make that judgment." The ethics commission does not comment on specific cases, but based on a description of Wentworth's financial arrangement, Ethics Commission General Counsel Sara Woelk said the fee may not be "occupational income" required to be disclosed.

Cris Feldman, the attorney for Texans for Public Justice who filed the open-records request that eventually led to the investigation of Wentworth and Green, is unconvinced. "Based on what's been reported, it's certainly ironic that a purported open-government proponent is playing fast and loose with basic financial disclosure requirements," Feldman said. "It appears that he may be violating the letter of the law, and at a minimum is violating the spirit of the law."