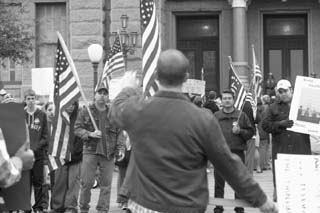 Quote of the Week: "There is nothing in the Bible that forbids capital punishment. The Bible is a rule and guide; as far as I know the Old Testament is still in effect." -- Rep. Robert Talton, R-Pasadena, in a bizarre tirade directed Monday at supporters of a ban on execution of juvenile offenders who noted (accurately) that Jesus Christ was killed by the state. Despite Talton's theological correctness, speakers from several religious groups, including the Southern Baptist Convention, supported the legislation.

The Save Our Springs Alliance has joined six other Central Texas environmental groups in a regional alliance to defend the Edwards Aquifer (see "A Regional Aquifer Alliance").