From Liberty Lunch to Homeland Security: Austin's Walk With CSC

Computer Sciences Corp. is now one of America's largest defense contractors. Is this a problem for City Hall? 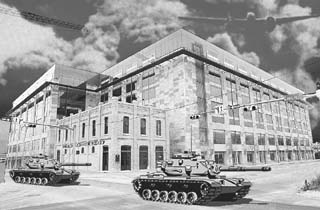 Is the city of Austin -- which recently passed a resolution opposing a unilateral attack on Iraq -- now linked to the Bush war machine? Not precisely. But four years ago, the city awarded $26 million in subsidies to Computer Sciences Corporation, which on Friday will most likely vote to merge with Dyncorp -- a technology and services company that has taken advantage of privatization of the U.S. military and of national security.

For years, CSC has won contracts from the U.S. Dept. of Defense to provide I.T. services. So has Dyncorp, a Virginia-based contractor-of-all-trades whose employees can run just about anything, from a county's child-support collection department to an airplane. But some of Dyncorp's projects are more controversial than others -- developing components of iris- and facial-recognition technology, sending planes and pilots to fly defoliation missions as part of Plan Colombia, and "forward-deploying" equipment and ammunition to the Middle East in preparation for war with Iraq. "Dyncorp offers the military an alternative to itself," writes Wired magazine reporter Dan Baum. Because the merger is still pending, CSC spokeswoman Jackie Van Erp couldn't comment on the Dyncorp deal or the company's activities. According to recent CSC press statements, by joining up with Dyncorp in the $950 million merger, the company will add another $6 billion in revenue from the federal government -- nearly 40% of its business -- and have 38,000 employees serving the U.S. government around the world.

CSC's role as a defense contractor was not much of an issue in 1999, when it entered its deal with the city of Austin to move its financial services unit (which produces back-office software for banks and insurance companies) downtown from its then-HQ near the Arboretum. The company's first choice had been the Terrace PUD right next to Barton Creek -- raising environmental concerns, not business-oriented ones. The city offered CSC a 99-year lease on its Warehouse District property -- former home to landmark nightclub Liberty Lunch -- as well as infrastructure and fee waivers. Last year, City Hall spent $4 million to buy back from CSC development rights to city-owned Block 21, planned to be home to a third building at the complex. The company has only 800 employees working in Austin, far fewer than the 3,500 it had hoped. Yet Wired didn't dub CSC "Homeland Security Inc." because it's shrinking: The merger with Dyncorp will make it one of the Top 10 defense contractors.

City Manager Toby Futrell, who negotiated the CSC deal, says City Hall knew about CSC's work for the feds, including a major contract it had won from the IRS while negotiations were taking place. But the Austin incentive deal was sealed well before the wars on terror, airport profiling, or pre-emptive strikes on Iraq. Since then, CSC has fulfilled all of its obligations under its deal, and the city has no authority to contest its merger with Dyncorp. "Any company can change its complexion," she says.

Now that CSC is "changing its complexion," should city officials regret the 1999 deal? Futrell and council members Daryl Slusher and Will Wynn say no. "I have some resentment that [we had] to use citizen dollars to do what I think is the right thing in the first place," said Slusher (who sponsored the city's anti-war resolution). "If we hadn't done that, they would be over the aquifer right now." Adds Wynn, who supported the CSC deal as president of the Downtown Austin Alliance: "I'm not going to be in the business of second-guessing local employers who have defense contracts. Do I want the war? No. Does that mean I regret the CSC deal made by a previous council in 1999? No."

Many tech companies may follow CSC/Dyncorp's lead, capitalizing on homeland security initiatives and military privatization; should the city refuse perks and incentives to such firms? Given Austin's current economic state, it seems unlikely such a policy would be popular, though Futrell didn't rule it out entirely. The city hasn't given an incentive package to a primary employer in about two years, and the whole program is now under review. "Just where do you locate?" she asks rhetorically. "Is it about job recruitment and retention? Certain kinds of industry clusters?" All of those questions are being asked by local officials, businesses, and community leaders, she says.

Meanwhile, local foes of the Bush Wars plan to keep their eyes on the new CSC. Local activists Stefan Wray and Pam Thompson have asked the city to "publicly distance" itself from Dyncorp by officially asking CSC not to complete the merger and for a public hearing to generate citizen input on the city's future relationship with the company. They also asked the council to call hearings to consider guidelines and criteria for entering long-term agreements with corporations that are defense contractors. Their Military Documentation Project (www.iconmedia.org/mdp) draws attention to the merger and provides information about CSC and Dyncorp's wartime activities. Today, they'll join members of the American Friends Service Committee, Women in Black, and other groups outside CSC's Downtown site in a protest against the merger.