The AISD budget task force closes its deliberations as the Board of Trustees gets ready to act. 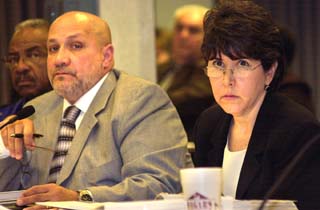 There are roughly three weeks remaining in the initial phase of the Austin ISD budget war, although by the March 31 board of trustees meeting there may be little more to do than mop-up action. The district budget is not officially adopted until August, and it can change over the summer, but the board is expected to close this month with its vote on the fiscal recommendations of Superintendent Pat Forgione and his budget task force. The 28-member task force -- administrators, businesspeople, parents, and teachers appointed by Forgione -- has been meeting weekly to review proposals listed in his Jan. 21 budget, "Working Paper."

The final meeting of the task force was Tuesday night. It proved somewhat anticlimactic, since the most difficult issue was expected to be how much of the district's growing fund balance to use to help close the $51 million deficit. Forgione pre-empted that debate somewhat, by first submitting a recommendation to increase his initial fund-balance proposal from $25.5 million to $29.5 million. That meant the committee needed to find only $3.4 million more in cuts (instead of $7.5 million) to meet its new goal of $21.5 million. The survivors: a couple hundred teaching personnel, including most special ed and more of the art/music/PE teachers, and half of the magnet teachers first proposed for layoff. But the intensive Reading Recovery and Account for Learning programs would be replaced with less expensive reading specialists, fewer custodians would move to a more labor-intensive zone system, and campus management assistants would also be laid off (in all, about 400 administrative and teaching staff members).

The altered proposals reflect changes since the working paper was issued. AISD's official deficit dropped from $59 million to around $51 million; falling property values led the state to adjust its calculation of the district's "recapture" payment as a Chapter 41 (i.e., "wealthy") district. The district's estimate of its "fund balance" (the reserve account banked for annual fourth-quarter expenses and emergencies) grew, according to AISD Chief Financial Officer Larry Throm, from $82.5 million to $90-95 million. And last week, Forgione announced a reorganization of AISD's administration and received "financial exigency" approval from the board for administrative layoffs and transfers that (if fully implemented) could save $3 million annually.

To most observers (not including the targeted administrators) those things sound good. But Forgione and district representatives rush to add that when property values decline, so do district revenues. This year's recapture payments are based on last year's higher values but paid with this year's lower revenues. And the fund balance needs to remain hefty, they say, to maintain the district's bond rating and in case the economy continues to stagger.

Forgione says his budget is designed for hard times, since it's not clear if or how the Legislature will help local districts or when the economy will rebound. "I'm trying to be very conservative but realistic," he said. "I think it's a realistic perspective [but] the uncertainty makes managing the deficit difficult." He called the administrative cuts representative of the hard decisions. "I'm cutting two of my four deputies, I'm cutting three of my five area superintendents. So I'm taking the first hit at headquarters."

Ramon DeJesus, co-chair of the budget task force, said last week that the group had endorsed the easiest decisions -- administrative or staff reductions and resource cuts "that have the least impact on students" -- but that the toughest choices remain. "We're trying to spread it out, so that everybody can take a little bit of pain," he said. "Hopefully," added DeJesus, "attrition will take care of a lot of these [personnel cuts]." There is also some pressure to make decisions quickly, so that both the administration and affected staff have time to plan.

Thus far, public response has been fairly localized, as parents try to determine how the cuts will affect their children's schools. But the teacher and staff representatives of Education Austin say the proposed cuts are still too deep and that the process has been rushed, top-down, and predetermined. Prior to the final meeting, EA co-President Louis Malfaro, who serves on the task force, says the committee seems to feel obligated to follow Forgione's lead. "I don't question that we have to make hard decisions," Malfaro said, "but the cuts they are proposing are just draconian, and I feel like they've been rammed down our throats." Forgione replies that he's "trying to get together with EA ... but I've got to manage this enterprise. I love teachers, and I want to protect our essential core subjects, but I've got to reduce my expenditures."

"The administration is only planning for the worst scenario, not the best," countered EA's Bruce Banner. "That's blocking your vision in one eye and losing all depth perception. They need to remember that the budget is for education, and not the other way around."

The central debate remains over how much to dip into AISD's fund balance, which is larger than expected -- thanks in part to earlier cutbacks and a hiring freeze. EA has proposed spending $10 million of the fund balance, thereby avoiding the deepest personnel cuts. Until last Friday, Forgione firmly resisted any deeper dip into "our savings account" -- over the weekend he retreated and added $4 million. The district is hosting two public forums -- last night at Akins High School and tonight (Thursday) at Reagan High, a session expected to feature major turnouts from Austin Interfaith and Education Austin.

The trustees will have the last word. Vice-President Ingrid Taylor said the board will review the recommendations and public input, and try "to be deliberate, with a deep understanding of the long-term implications of what we do. We don't want to make short-sighted decisions, and we want to allow flexibility if the Legislature or our final property evaluation [due in July] enables us to make changes."

Citizens can sign up to speak for one minute at tonight's Reagan High public forum beginning at 6:30pm, or e-mail the board directly at trustees@austin.isd.tenet.edu.