As I Was Saying ... Something about layoffs, tax hikes, and cutting the public safety budget? 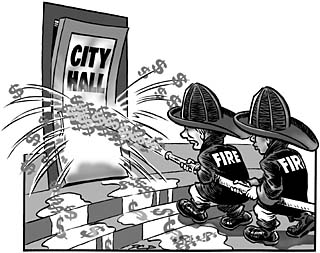 Last year about this time, I wrote a column explaining why, because of my impolitic opinions about Austin's fiscal strategy, I could never join Daryl Slusher (here) or Laura Miller (in Dallas) in making the leap from alt-weekly city scribe to City Hall. It would now appear, though, that I'm not out of the running for city manager.

Last Thursday, Toby Futrell delivered her latest dose of foul budget news -- appropriately, amidst a heavy and ominous downpour -- laying on the table all the options that last year were impossible. It is now almost assured that the City Council -- under a new mayor's leadership -- will raise property taxes in September when it adopts the fiscal 2004 budget. City leaders are still making brave noises about avoiding layoffs and service cuts, but don't count on it. And while Futrell may not be ready to cut public safety spending -- a third-rail issue in these parts and times -- she clearly wants to slam the brakes on its rampant growth.

Imagine that. The persistent "structural imbalance" in City Hall's books just might could possibly be the fruit of our artificially low property tax rate, our expensive and labor-intensive modes of city service delivery, and our unrestrained, disproportionate investment in public safety. Hate to say I told you so, so I won't. But don't say you weren't warned.

The council's safest voyage into once-forbidden territory will be under the tax banner. Since appraisals (particularly for commercial property) are declining for the first time in 10 years, the all-important "effective rate" -- that which would keep the tax bill for "the average home" unchanged -- is going up, an estimated 3.5 cents. The council is not required to hike to the effective rate, but it would be idiocy not to, and Council Member Betty Dunkerley, to whom her colleagues defer on most things that involve a decimal point, has said as much.

But the council is already flirting with an even greater hike, to the "rollback rate" -- the rate beyond which citizens can petition for a referendum on the tax rate, a place City Hall would rather not go right now. That would be an increase of a little more than 10% from the current rate of just under 46 cents, and it would get Futrell only about one-third of the way across her current gap of $58.1 million in the city General Fund, where your taxes go. (It's $77 million if Futrell aims to avoid zeroing out the General Fund's already depleted cash reserves, which, given our spate of rainy days, is a commendable idea.)

I grew tired long ago of debating the wisdom of Austin's decade-long low-tax fantasy, so let me just say the council should go ahead and commit to the rollback rate right now. Then, when constituencies bark about their services being cut, the council can, effectively, dare the people to accept the even higher rate that's actually required to pay for all the things they want City Hall to do.

It would take eliminating 74.5 Austin Music Networks to balance Austin's budget with spending cuts alone, and we have only one. So real services, beholden to and beloved by real people, will have to be cut. That likely means layoffs, since personnel accounts for nearly two-thirds of General Fund spending. Futrell's latest budget brief -- the script for last week's council retreat -- notes that "all departmental organization structures are being reviewed to evaluate the managerial spans of control and to ensure optimal management efficiencies." I trust you know what that means.

Futrell also notes that "prior budget reductions were based on cutting around the edges of programs and services." City Hall has been loath to cut services in a way anyone would notice, but Futrell admits that if it were up to city employees, she would pursue "eliminations or closings rather than trying to maintain quality services with inadequate funding." A prime and likely target is new facilities coming online -- from the Carver Museum and Library to the Circle C fire station, from Town Lake Park to the Downtown homeless shelter to the new City Hall itself. Futrell may feel no choice but to mothball some of these, ô la the Intel building, until the fiscal clouds depart.

The citizens -- the same ones, sadly, who bitch about their taxes -- will object to such drastic measures, since we have demanded abundant city service, with an emphasis on quantity rather than quality, that we have not been able to afford or willing to fund for a while. Futrell reminds the council that Austin has substantially more parkland, rec centers, and libraries per capita than comparable cities. Given my personal predilections, those aren't the examples I would choose, but the same pattern is true across the budget. The city's General Fund payroll (not counting cops and firefighters) has grown about 27% in the past decade. Of course, Austin's population has grown even faster, which helps explain why city employees (particularly the cops and firefighters) have racked up more than $25 million in overtime over the last two years.

Public safety was "held harmless" last year from cuts, in Futrell's parlance, which is a bit of an understatement. Pay increases born of "meet and confer" contract talks with the police and fire unions have cost the city more than $100 million over the last six years. Let us just say this is a lot more money than other city employees (including EMS) have seen in their pay envelopes. The current meet-and-confer with the firefighters was abruptly abandoned late last year, and Futrell has proposed a permanent "public safety premium" in lieu of future salary negotiations. Public safety personnel would get raises 2% above what everyone else gets, which this year is likely to be nothing.

Of course, if any other city employees had scored such largesse, the citizens -- again, the same ones who bitch about their taxes -- would be ranting on talk radio about greedy unions. (To paraphrase Gov. Perry, behind every one of those cops and firefighters stands a taxpayer.) But public safety is different.

Not so different, though, as to allow a huge section of the General Fund -- public safety consumes almost all the city's sales and property tax revenue -- to play by entirely different fiscal rules. Even leaving aside parks and libraries and other "frills," the council is all but certain to cut contract funding for social services, and Austin is struggling simply to meet state and federal mandates for public health care. We cannot continue the politically appealing canard that public safety belts cannot be tightened. 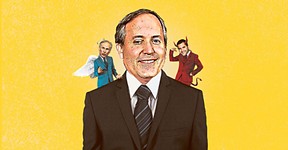