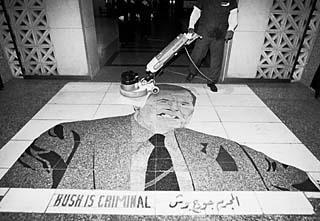 Entrance to Al Rashid Hotel, where diplomats and important media people stay in Baghdad. After the "Bush War" -- as the Gulf War is known in Iraq -- this mosaic was installed, and guests have to step on George Bush's face as they enter. This photo was taken by Austin photographer Alan Pogue on a trip to Iraq in December. (Photo By Alan Pogue)

Quote of the Week: "I feel like a weapons inspector in Iraq. Trying to get the information from the insurance companies and to get them to tell the truth has been quite challenging." -- State Sen. Troy Fraser, R-Horseshoe Bay, charged with leading the Senate's response to the home-insurance crisis. Fraser's SB 310, forcing insurers to tell the state exactly how they set their rates, was signed by Gov. Perry this week.

Ol' Man Winter postponed Austin kids' first encounter with the latest high-stakes bubble test they call "education" in these parts. The TAKS test will be administered today instead.

The Austin ISD board of trustees declared a financial emergency due to the district's $51 million deficit, enabling Supt. Pat Forgione to proceed with an administrative "reduction in force." Forgione announced the planned elimination of 50 administrative positions, effective June 30, and the simultaneous creation of 30 new positions for a "leaner, thinner" organization. For more budget news, see Happenings.

In a rare bit of cheering news on the death-penalty front, the U.S. Supreme Court ruled in favor of Texas death-row inmate Thomas Miller-El, who alleges racial bias in jury selection at his 1986 trial. See Supremes Back Miller-El.