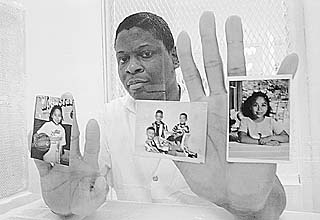 In a federal appeal filed Feb. 14, attorneys from the Texas Defender Service, alleging prosecutorial misconduct, inept investigative work, and ineffective assistance of counsel, asked that a federal judge vacate the death sentence of Rodney Reed. "Mr. Reed shows how a black man, lacking the funds to avail himself of a legal dream team, was falsely accused and convicted of the rape and murder of a young white woman in the small Texas town of Bastrop," TDS attorney Bryce Benjet wrote in Reed's federal habeas corpus appeal. "Reed's conviction resulted from unreliable expert testimony, a bungled crime scene investigation, suppression of exculpatory evidence, and an unprepared defense."

Reed was convicted in May 1998 of the rape and murder of 20-year-old Giddings resident Stacey Stites. Prosecutors argued that Reed somehow overcame Stites in the predawn hours of April 23, 1996, as she drove from Giddings to Bastrop to work a shift at the HEB. The state's case was based solely on semen DNA that matched Reed -- no other physical evidence linked him to the crime. Reed has maintained his innocence, saying that he had had a relationship with Stites (which would explain the DNA results) while she was engaged to a Giddings police officer, Jimmy Fennell. Indeed, Reed's family and supporters have long contended that Fennell was a more likely suspect in the crime -- he knew about Reed and Stites' affair, they say, and was not happy about it. (For more on the case, see Who Killed Stacey Stites?, May 24, 2002.)

While Reed's trial attorneys told the jury they would prove that Reed and Stites were lovers, they failed to call numerous witnesses who could have substantiated the affair. But the inadequate performance of Reed's attorneys, TDS charges, wasn't all that went wrong. In the 133-page appeal, Benjet expands on prior allegations of misconduct in the investigation and prosecution of the crime. The appeal states that, in addition to witnesses known to the defense, four other witnesses had approached police after Stites' murder, each saying that they had seen her the morning of her death, each time with men other than Reed. A woman named Martha Barnett said she saw Stites with Jimmy Fennell outside the Old Frontier store in Paige around 5am; she said she recognized Stites from the Bastrop HEB.

According to the appeal, Barnett told the story to her attorney, former Lee County Attorney Steven Keng, before Reed's trial began. According to an affidavit from Keng, he approached then Bastrop Co. District Attorney Charles Pennick -- who, along with a special prosecutor from the Texas attorney general's office, was prosecuting the case -- to share Barnett's story, but Pennick, whom Keng had known for over 20 years, wasn't interested in hearing it. "He laughed and told me that he had all of the evidence he needed, and did not want to hear any more about the case," Keng wrote in his affidavit.

The TDS appeal also details witness statements of three other people who told police they'd seen Stites that morning near the area where her body was eventually found, with two men -- one white and one darker, neither of them Reed. None of this information was ever given to the defense, in clear violation of Reed's rights. "Mr. Reed's defense lawyers never knew at trial that Ms. Stites had been seen in the company of two men: a dark-complected man who was not Rodney Reed and a white man," Benjet writes in Reed's appeal. "Consequently, the defense never knew that there was evidence that would have supported the theory that Jimmy Fennell had help in killing Ms. Stites, and that would have effectively impeached the State's assertion that Fennell could not have murdered Ms. Stites."

Benjet's appeal also claims that the prosecution withheld from Reed's attorneys a full, unedited version of the crime scene videotape, which showed numerous "forensic missteps" by investigators that tainted evidence. "The manner in which the [Texas Dept. of Public Safety] analysts collected the evidence in Mr. Reed's case undermines any confidence in their results," Benjet writes. "Because of gross oversights in the handling of evidence, any claim that their results are reliable cannot be sustained. In fact many of their conclusions may have relied on evidence created by contamination by negligent investigators."

Among the errors shown in the previously unreleased video: Investigators drove cars on the dirt road by the body before checking for tire tracks or footprints and touched and rolled the body back and forth without wearing gloves. Police placed a blanket over the body before it had been processed for evidence, and investigators failed to document the temperature of the body to better determine time of death. The tape also shows a DPS analyst failing to change her gloves before collecting evidence from different parts of Stites' body. This, Reed's attorneys claim, would explain why Reed's DNA was found on Stites' breasts: The uncut video shows the analyst touching Stites' bra and breasts directly after taking a sample from her vaginal area, without changing gloves.

According to the appeal, TDS attorneys last week showed Reed's trial attorney Lydia Clay-Jackson the full video; Clay-Jackson says she'd never before seen it. "I had no way of knowing, prior to February 10, 2003, the degree of contamination at the scene where Ms. Stites' body was found," she told TDS, "nor the inappropriate evidence collection techniques used at the scene," because prosecutors never released the video to the defense.

Reed's appeal also charges that prosecutors failed to disclose information that could've tarnished Fennell's squeaky-clean reputation. According to TDS, prosecutors failed to release information -- despite being ordered to do so by the trial judge -- showing a pattern of brutality against minorities by Giddings police officers. Fennell had been cited for brutality on several occasions, including an incident a month before Stites' death where he held his service revolver to the head of an unarmed Hispanic man during a routine traffic stop.

In short, every shred of evidence the state has presented as airtight in the Reed case is shaken by the new information in the federal appeal. "The law enforcement investigation and subsequent prosecution stretched facts to fit their theory ... and suppressed any information inconsistent with their conclusion," Benjet writes. "The overzealous prosecution in this case, when combined with an unprepared and outgunned defense, resulted in a complete breakdown of the adversarial process and the conviction of an innocent man."