Private investigator Louis Akin alleges that police and prosecutors busted him on false charges to block defense efforts in the yogurt-shop case. 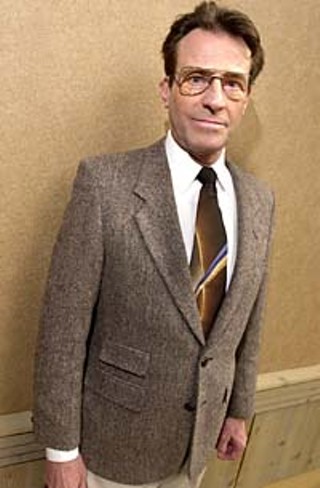 All charges against Maurice Pierce, the third defendant awaiting trial for the yogurt shop murders, were dismissed last month. But the fallout from the investigation and prosecution of the infamous 1991 quadruple-homicide continues to rain on the Travis Co. District Attorney's Office and the Austin Police Dept. On the heels of the Pierce dismissal, a collateral case was also quietly dismissed -- calling into question the integrity and credibility of APD Detective Paul Johnson, the lead investigator on the 12-year-old murder case.

Back in July 2002, private investigator Louis Akin was working for the defense team representing Michael Scott, the second yogurt shop defendant to face trial. (The first, Robert Springsteen IV, was convicted and sentenced to death in 2001.) On July 27, Akin was out serving subpoenas on potential witnesses that Scott's attorneys might call to testify for the defense at the trial. Akin says he had a list of nearly 80 subpoenas to serve, among them one for Joan Jansen, mother of the prosecution's star witness Chandra Morgan. At Jansen's home, Akin said he served her with the subpoena in a typical manner: He informed her that she was being subpoenaed, reading from the official service document and leaving her with a copy with the date and time for her appearance written in. He then refiled the original subpoena with the Travis Co. district clerk's office.

Just two days later, though, Akin said he received a disturbing call from Paul Johnson. Akin said the APD homicide detective told him he intended to file criminal charges against Akin for a "discrepancy" in the service of a subpoena. "I asked [him] several times during that telephone call which subpoena he was talking about," Akin said. "He wouldn't give me any information about it and insisted that I come to his office to be interrogated or he would file criminal charges against me. It was my impression that Johnson's intention was to harass and intimidate me for the purpose of disrupting the defense's effort[s]; in other words [to] obstruct justice, and I told him so."

As it turns out, the brouhaha Johnson was stirring up could have quickly been disposed of as a miscommunication -- and, sources say, originally it was. According to court filings, shortly after Akin left Jansen's house, Jansen called the APD investigators to say that Akin had come to serve a subpoena on her daughter Chandra Morgan. After Jansen said that Morgan didn't have to talk to him, she said, Akin served her with a blank subpoena form, telling Jansen she had to appear in court, the implication being that Akin decided on the spot to harass Jansen. According to defense attorney Carlos Garcia, several days later Johnson brought Jansen's allegations to the attention of Assistant District Attorneys Robert Smith and Darla Davis, who were prosecuting the yogurt shop cases, as well as the defense lawyers and District Judge Mike Lynch. The parties discussed the matter, Garcia said, and determined that there was nothing to it -- that the dustup was clearly a misunderstanding. "Nobody thought anything of it," he said. Lynch says he doesn't even remember "any such meeting. ... It couldn't have been such a big deal because I don't even remember it." However, Lynch said he does remember telling attorneys for both sides "'Listen, I want this trial to go smoothly' -- to get the witnesses here that we need, and that any collateral matters we'd deal with later."

And that, Akin and Garcia said, was the end of it -- or so they thought. But in the early morning hours of Nov. 11, Akin was arrested at home by two APD officers on a charge of tampering with a governmental record, a state jail felony. According to the probable-cause affidavit -- sworn by Johnson on Sept. 26 and, apparently, accepted by the grand jury that indicted Akin on Oct. 24 -- Johnson had "good reason to believe and did believe" that Akin tampered with a government record by "possessing a blank ... subpoena form issued by a court with intent that it be used unlawfully ... by intending to serve said blank subpoena form on someone whom the court had not subpoenaed, and did so with intent to defraud Joan Jansen ... by serving a subpoena on [her]." This was not true, of course; Jansen had, in fact, been subpoenaed by the court two months earlier. Akin spent the morning in jail before Garcia and fellow yogurt shop attorney Dexter Gilford bailed him out.

Since then Akin has been under the DA and APD's thumb on a charge that five minutes in the district clerk's office would have shown to be false. Akin has been unable to work -- his P.I. license has been suspended since the indictment came down -- and has yet to be paid for the work he did on Scott's case. Meanwhile, Akin's defenders appear to have done everything they could to show the DA's office that it simply didn't have a case. Sources say that attorneys took the subpoena in question, stamped on July 24 and issued for Jansen, into the DA's office to show that Johnson's "facts" were false. "And they just ignored it," the source said. That is, until Jan. 30, when the case was quietly dismissed, "pending further investigation," the court paper reads.

But what exactly the DA has left to investigate, besides Johnson's conduct, is uncertain. Neither DA Ronnie Earle nor First Assistant DA Rosemary Lehmberg returned phone calls requesting comment. Akin and his attorneys allege that Johnson did not apparently perform any independent investigation to determine whether a subpoena had ever been issued for Jansen. He instead preferred to swear under oath that there was not, thereby falsely accusing Akin and causing a grand jury to indict him. "It was on file all along," said Garcia. "It is clear from the way that [Johnson] worded the probable-cause affidavit ... that he never checked. They were lies."

Akin agrees and is understandably furious. "Johnson assumed he 'knew the facts,' and he was wrong. He was so sure of himself that he walked by the district clerk's office daily for two months without looking to see if the subpoena was in the file or not. It was there the whole time," Akin said. "Johnson took an incomprehensible risk in swearing to a false affidavit. If the subpoena for Jansen was in the file and he filed an affidavit swearing that it wasn't, he would be perjuring himself. It was a matter of Johnson looking to see if the cannon were pointed at me or at himself before lighting the fuse." Johnson did not return calls from the Chronicle requesting comment.

The incident serves as another blemish on the state's case against Pierce, Springsteen, and Scott. Johnson has been represented as the cop who wouldn't quit -- the man who took the old, cold yogurt shop case and came up with the three "guilty" parties. But if Johnson failed to investigate a case as simple as Akin's -- apparently preferring to indict now and investigate never -- what else could he have overlooked or rushed to judge?

It also comes as no surprise to yogurt shop case insiders that the hullabaloo would surround Chandra Morgan, a troublesome witness to whom the state has clung in an almost too-desperate way. Morgan testified at both Springsteen and Scott's trials -- each time changing her testimony in small yet significant ways. At Springsteen's trial Morgan testified that as a 13-year-old girl she went out with Springsteen, Scott, and Pierce the night of the murders, driving with them, shortly after the crime, in a rusted two-door Honda, to the playground of a local elementary school. She and the boys had taken LSD that evening, she said, and while at the school she said she saw a small-caliber pistol, seemingly the .380-caliber semi-automatic pistol used in the commission of the murders, tucked into Springsteen's waistband.

At Scott's trial, Morgan's testimony morphed: Now the boys were in a large American car (more consistent with the car Pierce owned at the time) and she couldn't remember if maybe the gun was actually tucked into Scott's waistband. Further, she testified that she had not dropped any acid that evening. According to court insiders, the state has coddled Morgan, offering her a veritable hot line to the APD to complain in case any defense attorneys might want to talk to her. Akin said that in his experience this was definitely the case. "The message [to the private investigators working the case] has always been, 'If you try to investigate this case we'll come down on you,'" Akin says of Johnson and the other APD detectives. "And if you try to contact Chandra, we're coming down on you."

There is an irony in Morgan's testimony -- at least in the first two trials where "confessions" by each defendant clearly contradicted her version of events. As one attorney close to the case put it: "You can't have it both ways. You can't have Morgan's version be truth and have the confession be truth." Arguably, if Pierce had gone to trial -- without the benefit to the state of any "confession," coerced or otherwise -- both Morgan's credibility and that of Johnson were set to take center stage. This offered prosecutors one more reason to keep charges pending against Akin, who could otherwise have shown up as a defense witness and could call Johnson's reputation into question. "A number of people don't think that it was a coincidence that the charges against me were dismissed the day after the charges against Pierce were dismissed," Akin said. Had the trial had gone forward, Akin said, he knows he would have been called as a defense witness -- testifying that Johnson "is at least a recklessly negligent and incompetent investigator who charges people with crimes without bothering to check the facts -- even when the facts are black and white and right under his nose. Johnson's actions would have embarrassed the DA's office and put them behind an eight ball in the Maurice Pierce case."

Although there are no charges remaining against either Pierce or Akin, Johnson is still heading up the yogurt shop investigation -- an investigation DA Ronnie Earle has said he hopes will still lead to another day in court. Meanwhile, Akin said he intends to file a complaint with the APD's Internal Affairs division and is contemplating further legal action. "I am disappointed that the DA's office didn't have the moral integrity to do the right thing and dismiss the charges against me the day after my arrest, when two attorneys produced a certified copy of the subpoena ... which proved the charges were groundless," Akin said. "The [DA's] reaction was to try to save face and protect their own. Justice always takes a backseat to politics."