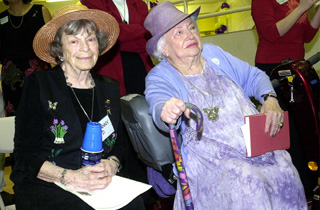 Quote of the Week: "I would walk to a federal court with a boy who didn't want to kill or be killed in Vietnam. It was as if I had walked in with a mass murderer. People are frightened, including some judges, when you represent a political or religious dissenter." -- Maury Maverick Jr., in his last column for the San Antonio Express-News, published Feb. 2. Maverick -- lawyer, legislator, columnist, and lion of the Texas progressive movement for a half-century -- died Jan. 28 at age 82. See Capitol Chronicle.

The 6th Civil Support Team, a unit of the Texas National Guard based at Bergstrom Airport, got its first real mission this week -- recovering pieces of the space shuttle Columbia after the craft broke apart over Texas. The 22-member unit was created in 1999 to respond to terrorist incidents and disasters. A memorial service at Houston's Johnson Space Center on Tuesday for the seven astronauts lost with Columbia was attended by President Bush -- apparently Dubya's first visit to NASA, despite his initial claims to the contrary.

The Barton Springs toxics crisis continued to bubble and dissipate: On Wednesday, the City Council was briefed by state and federal environmental regulators who have yet to report any evidence that the pool and creek are unsafe. Meanwhile, UT officials tested water and soil samples from Waller Creek through campus.

The City Council candidate count now stands at 13 -- we think -- with seven mayoral aspirants, four contenders for Place 5 (the seat being vacated by Will Wynn), and nobody yet challenging incumbents Danny Thomas and Raul Alvarez. See Austin Stories.

Speaking of the City Council, the hottest item on today's agenda should be a resolution opposing war in Iraq. See Austin@Large.

Travis Co. now has two more cities, as voters in Volente and Webberville both approved incorporation in what turned out to be close votes after contentious campaigns. Pro-town forces won in Volente by 24 votes, in Webberville by merely seven.

Despite concerted efforts by British citizens, activists, and government officials, dual-national John "Jackie" Elliott was executed Tuesday night for the 1986 murder of Joyce Munguia in East Austin (see p.15). On Wednesday morning -- as Colin Powell was "making the case for war" at the UN -- the International Court of Justice in the Hague unanimously ordered the U.S. to stay the executions of three Mexican nationals, including Cesar Fierro and Roberto Ramos in Texas. More on this next week.