The fallout from an employee lawsuit briefly shuts down Travis County's air ambulance service and vexes the Commissioners Court. 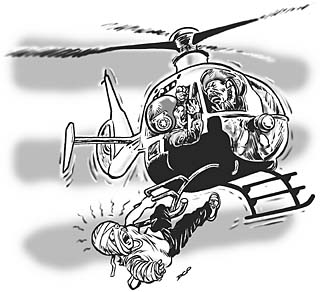 On Jan. 23 members of the Austin-Travis Co. EMS STAR Flight ambulance crew, jointly run by the city and county, formed a work stand-down, creating a temporary stoppage for the emergency air ambulance service. At issue were safety concerns related to an ongoing civil lawsuit filed last August by Merlin "Spanky" Handley, one of STAR Flight's pilots. In the suit, Handley, also STAR Flight's aviation operations director and a county employee, argues that his city-employed supervisor, Casey Ping, the service's program manager, is not qualified to supervise the helicopter service -- and hence Handley's work -- according to Federal Aviation Administration guidelines.

Handley's name is on STAR Flight's license, and, his suit alleges, the FAA does not allow "an influence outside of the certificate holder to direct the use of the helicopter" -- meaning, apparently, that Handley cannot be forced to answer to a city supervisor. Handley's suit alleges that once he made this licensing concern known to the FAA -- and, he alleges, they had "grave" concerns about his report -- he received a bad performance evaluation by Ping and failed to receive an annual raise afforded to other county employees. (Handley's lawyer, Betsy Bender, did not return phone calls requesting comment.)

Handley had been moved to another county job several months ago after STAR Flight crew members questioned Handley's ability to focus on his job in light of his legal action -- especially after Handley added at least one of his direct subordinates, a fellow pilot, as a defendant in the suit. So STAR Flight members were surprised by the Jan. 21 announcement that, before any airing of the crew members' concerns, county commissioners had decided to move Handley back to his STAR Flight job effective Jan. 27. According to the Statesman, the commissioners said that they had no choice but to move Handley back because his name is on the FAA license. But Austin-Travis Co. EMS Employees Association President Jason Martin says the county's reasoning is disingenuous, since commissioners have had three months to switch the license -- apparently a not-uncommon occurrence. Martin says the FAA even offered the county an additional time extension to get the paperwork done.

In the interim, Martin said that he had requested several meetings with commissioners, Karen Sonleitner in particular, to voice the crew's concerns about the effect of the Handley suit on crew morale and safety. Martin says those requests and concerns fell on deaf ears. (Sonleitner did not return calls from the Chronicle requesting comment.) Hence, Martin said, the employees went into a stand-down so they could draft a letter to the Commissioners Court outlining the safety issues raised by the personnel chaos. Martin said the move was not unreasonable, especially considering statistics that show that "personnel strife" has been the cause of most air ambulance crashes. "When crew members are in an argument with a pilot there is no way they should be allowed to ... go out and take a call," Martin said.

Assistant City Manager Laura Huffman, who oversees the city's public safety departments, says that a safety stand-down is the crew's prerogative. "It is typical, in any high-caliber flight operation, that the crew has the ability to stand down if there are any structural issues [they believe might] affect safety," she said. But Travis Co. Judge Sam Biscoe appeared a little less understanding. He said that he was never personally contacted by anyone about the crew's concerns and that he would've been happy to hear them. "The person who controls the court is Sam Biscoe, yours truly," he said. "If I'd had any inkling they wanted to talk to the court, I would've [asked them to]. I can tell you no one asked to talk to me."

Shortly after the crew drafted its memo to the court, Biscoe called them in for an emergency meeting (lengthening the stand-down), only to tell the crew he was "puzzled" by their action and that he didn't know if it was legal. "I certainly wouldn't have done it. I don't know if the things you said today justify it," he told the crew. This response didn't go over well with Texas Monthly publisher Mike Levy, local political gadfly and longtime advocate for EMS, who chastised Biscoe and Sonleitner for their responses. In the heat of a day's worth of e-mail, Biscoe wound up calling the hours-long stand-down a "strike" -- showing, observers argued, that he and the court didn't understand the crew's real concerns. "I'm a country boy from East Texas, and when workers refuse to work, no matter what you call it, it is the equivalent, to me, of a strike," Biscoe told the Chronicle. "This is public safety ... I don't like it that public employees took the day off to write a letter."

Biscoe apparently recovered his cool during the court's first executive session on the matter Jan. 28. He announced afterward that he and Sonleitner would conduct one-on-one interviews with each of STAR Flight's 24 crew members to get more information about the personnel situation. Meanwhile, Huffman said that an independent review of STAR Flight's personnel structure is almost ready to get under way. A panel of county and city safety officers, an expert pilot, and an employment expert will likely begin meeting next month and will be asked to submit a full report within six weeks.