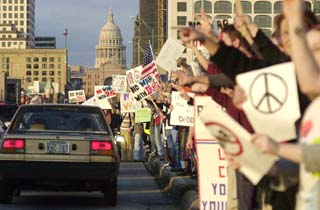 Timed to precede President Bush's State of the Union Address, hundreds of anti-war protesters lined both sidewalks of the Congress Avenue Bridge Tuesday. The activists ran the gamut from children to the elderly. Although some of the protesters above chose to block traffic -- six people were arrested for doing so -- most tried to win over rush-hour commuters and were rewarded with a steady stream of supportive honks and peace signs. (Photo By John Anderson)

On Wednesday morning, Naked City learned that City Council members Daryl Slusher, Raul Alvarez, and Jackie Goodman were preparing a council resolution, to be offered for consideration next week, opposing unilateral U.S. military action against Iraq and supporting continuation of UN weapons inspections. At least 50 cities have passed similar resolutions, and campaigns are under way in dozens more. Last week, Naked City polled Austin council members on the issue. Will Wynn said although he has reservations about military action, he would consider such a resolution "completely outside" the council's jurisdiction and would vote against it on those grounds; Betty Dunkerley said that while she has made her position "against war" known to U.S. Rep. Lloyd Doggett, she is reluctant "to get involved with formal stances on issues with different governmental bodies." At press time, Gus Garcia and Danny Thomas had not yet responded. -- Michael King

Paul Saldaña, Mayor Gus Garcia's chief of staff, is going the way of others before him -- from the public affairs of City Hall to the public affairs of private industry. On March 1, Saldaña will join the lobbying outfit of Don Martin and Trey Salinas, who was Saldaña's counterpart in the office of former Mayor Bruce Todd. Saldaña joins the team as a vice-president overseeing a new division focusing on Hispanic and minority community outreach. He brings 14 years of municipal government experience to the job. His departure from City Hall, effective Feb. 14, will set off a round of musical chairs in the mayor's office. Until Garcia himself leaves his post in June, Adana Barry will serve as his chief of staff, as Cindy Cervantes advances to executive assistant and Maria R. Garza to special assistant. Executive Assistant Adam Smith will stay put and oversee, among other things, Garcia's proposed smoking-ordinance amendments. -- Amy Smith

The Austin-Travis Co. STAR Flight air ambulance crew went into a work stand-down for most of Jan. 23, over safety concerns related to a personnel issue. In August, ambulance pilot Merlin "Spanky" Handley filed a whistleblower lawsuit which alleges (in part) that city of Austin supervision of a Travis Co.-licensed helicopter violates FAA guidelines. Handley alleges that after he brought his concerns to the FAA's attention, his city supervisor Casey Ping retaliated against him. According to Austin-Travis Co. EMS Employees Association President Jason Martin, STAR Flight crewmembers have been trying in vain to get the attention of the Commissioners Court for months, to discuss the safety implications of Handley's suit. Martin said the crews are concerned since Handley, the aviation operations director, has named another pilot -- one of his direct subordinates -- as a co-defendant in the suit. Statistics show that "personnel strife" is the leading cause of air ambulance crashes, Martin said, and thus the safety stand-down was logical. "If crewmembers are arguing with a pilot, there's no way you'd allow them to walk out of a room and let them take a call," Martin said. At an emergency meeting on Thursday and again at their regular Tuesday meeting, the Commissioners Court tried to get a grip on the situation and will take up the issue again on Feb. 4. -- Jordan Smith

As expected, on Monday the Austin ISD board of trustees unanimously approved a task-force recommendation that sixth-grade students from Allan, Govalle, and Metz elementary schools begin attending Martin Middle School in the fall of 2003, thereby eliminating sixth grades at those three schools. Sixth grades will remain at Allison and Zavala, with students from those two campuses attending seventh grade at Martin. Next month the board will consider a task-force report concerning the proposed addition of sixth grade to Kealing Junior High. -- M.K.

Alva Curry, convicted for the murder of convenience-store clerk David Vela during a 1991 robbery in East Austin, was executed Tuesday night in Huntsville. Curry is the first Travis Co. inmate to die by lethal injection since 1999. Another Austinite, John "Jackie" Elliott, is set to die Feb. 4 for the sexual assault and beating death of Joyce Munguia in 1986. Elliott, who was born in England, has become a cause célèbre in the UK, which considers him a British subject and opposes the death penalty in all circumstances. Meanwhile, the Texecution Express continues unabated; Curry's death was one of three executions scheduled for this week. -- M.C.M.

The city and Seton Healthcare Network might be able to salvage their tattered relationship if the two can agree on terms for building a new Children's Hospital at the old Mueller airport site. Negotiations may begin as early as next week on a proposal to keep the pediatrics facility in Central Austin, rather than moving it to a Parmer Lane site Seton recently acquired. "The city is willing to consider almost anything to not have this relationship deteriorate over this issue," City Manager Toby Futrell said. The two are currently negotiating how Seton will continue honoring its lease obligations at both Children's and Brackenridge. On the Mueller prospects, Futrell says she would prefer a public-private partnership in the new hospital. Seton president and CEO Charles Barnett says the health care network wants to buy the property and build the $175 million hospital with private funds. -- A.S.

That all assumes that Mueller is not reopened for general aviation, an option that state Rep. Ron Wilson, D-Houston, would like to throw back on the table. Wilson's HB 483 would amend his own 2001 bill directing TxDOT to open a state-owned small-craft airport in Central Texas. That bill specifically excluded Mueller from consideration, a concession Wilson -- who twice before tried to keep Mueller from closing in the first place -- had made to Dist. 46 Rep. Dawnna Dukes. Apparently, he's changed his mind, but HB 483 does not require that Mueller be reopened -- only that the site be "considered" by TxDOT -- and city and neighborhood leaders see no cause for panic. In the past, the FAA has made clear it doesn't want to see Mueller reopened, and reviving the airport could be a economic drag not only to Austin but to surrounding towns -- 16 at last report -- that see a state airport as a potential boon for them. TxDOT is currently doing a site-selection study. -- M.C.M.

Gov. Rick Perry has appointed Cedar Park developer Bob Tesch to chair the Central Texas Regional Mobility Authority board. The RMA, formed to expedite local road building, is taking as its first project the planned U.S. 183-A toll bypass to and through Cedar Park. Williamson Co. commissioners appointed former Round Rock Mayor Mike Robinson to the RMA seat vacated by Tesch when he moved to the chairmanship. -- M.C.M.

Lawyers for Central Texas bass fishermen and for the Matagorda Bay Foundation have threatened legal action if the city of Austin, LCRA, and Texas Parks and Wildlife Dept. release 1,600 more sterile grass carp into Lake Austin to combat the hydrilla scourge. The imported aquatic weed, which now covers hundreds of acres of the lake, has been blamed for at least one death and poses a risk to the city's water-treatment plants and LCRA's hydroelectric facilities along the Colorado -- but also provides excellent habitat for bass. Grass carp -- which can eat their weight in hydrilla and other vegetation every day -- have been blamed by fishermen and environmentalists for causing havoc in other Texas lakes, including Lake McQueeney and Lake Conroe. The groups threatening suit say the city and LCRA need permits from the Texas Commission on Environmental Quality. -- M.C.M. More than two dozen workers at Bergstrom Airport have been charged by U.S. Attorney Johnny Sutton with lying and falsifying their identities to obtain security clearances. (In at least some cases, the workers were in the U.S. illegally.) The bust is part of "Operation Tarmac," a nationwide homeland security effort; Sutton's office notes that more than 5,000 Bergstrom workers were found to have obtained security badges honestly. Of the 28 named in Tuesday's indictments, 15 have been arrested. All of those 15 are Hispanic; the U.S. attorney has charged several defendants with various immigration violations as well as with the security-related charge, which carries a potential five-year prison sentence. -- M.C.M.

The Occupational Safety and Health Administration cited Austin-based Brigham Exploration Co. earlier this month for alleged "willful violations" of safety standards in the July death of a worker in Bay City. The worker, employed by a subcontractor to the oil-and-gas exploration firm, was killed while preparing to install a pressurized gas line that ruptured and struck him. OSHA is seeking a penalty of $168,000. Brigham disagrees with OSHA's findings and is considering an appeal. -- L.N.

Travis Co. commissioners on Jan. 28 approved a proclamation honoring retiring Sheriff's Office Chief Deputy Dan Richards. In accepting the honor, Richards, a 22-year TCSO veteran, told the court that even though he's "sort of hated" his job since the mid-1980s, he still "liked the people" and the agency's mission. Former Sheriff Doyne Bailey will return to TCSO to take Richards' place. -- J.S.