If you don't read this, the 'Statesman' will poison Barton Springs. 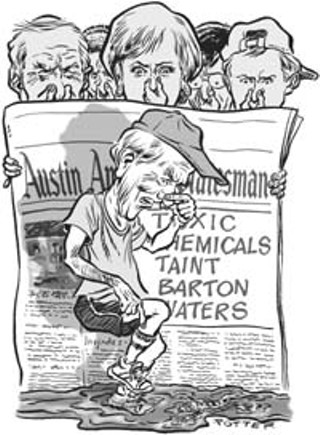 Whatever else you might think about the Statesman's ethics, at least they don't rig their Web poll. The Sunday query on the "unscientific" and easily manipulated dot-com survey was "Do you feel safe swimming in Barton Creek?" The choices were "I haven't felt safe swimming in Barton Creek for years"; "I feel as safe as I always have"; and the one they would be glad for you to pick, "After seeing this series, I certainly don't." In Sunday's issue, the daily devoted hundreds of column inches to the stories, graphics, and editorials in its Barton-Springs-is-poisoned package, in which the Statesman compares Austin's favorite urban waters to Love Canal.

But despite the daily's efforts to scare the fecal coliform out of readers, two-thirds of the Web-surveyed indicated they felt as safe as ever. I wonder how many citizens would have chosen, were it offered, a fourth option: "I don't believe one word the Statesman says about Barton Springs."

It's apparent my Chronicle colleagues and I feel this way, but our biases are obvious. So are the Statesman's -- if the Barton package isn't "advocacy journalism," then that term has no meaning, though the daily likes to pretend it has no such baggage. But others have noticed, not least among them City Manager Toby Futrell, members of the City Council, the city's environmental staff, and activists in the environmental community. You know -- the people who actually know something about Barton Springs, no matter how much they may disagree among themselves. Judging from their bared-teeth response Sunday afternoon, not more than 12 hours after the Sunday paper hit the streets, they found the Statesman package, like the Web poll, "unscientific" -- and polished to a fine shine to reflect the daily's political agenda.

Hence our cover this week; we needed to not only twit the competition but give due play to an equally important dimension of this breaking story. The city has responded not to what the Statesman reported in staggering detail -- Futrell and her staff knew all that already -- but to what the Statesman alleged, speculated, implied, and suggested in the process. The "dialogue" Futrell wants to have over the next 90 Springs-less days -- which will end two weeks before the next mayoral election, three weeks before the Lege adjourns -- will not just be about the proper way to measure benzo(a)pyrene in a cupful of Barton Creek mud. It will be about the premises embedded in the Statesman's agenda, at least as City Hall and the progressive community understand them -- that the city environmental strategy has failed, that Barton Springs is a lost cause, that it's unfair to restrain developers under the circumstances.

Within the City Council, the "dialogue" has already begun. While Jackie Goodman told the Save Barton Creek Association that the Statesman report was "an attempt to rewrite history and ignore data," Will Wynn (who's running for mayor, y'know) said Tuesday that Futrell's Barton-Springs-is-safe conclusions are "premature" and that the city testing data reported by the Statesman should have been made more public. Both agree, though (as do their colleagues), that the city's current environmental strategies need not be abandoned. (On Tuesday, Mayor Gus Garcia tasked Daryl Slusher with the lead role in coordinating the council's official response.)

Much of the information contained in the Statesman's Sunday edition is absolutely true, well substantiated, and genuinely alarming. Much more of it is, while "valid" in some abstract sense, not nearly as conclusive as the daily pretends it is -- or, at least, it didn't take Futrell and her cast of experts much effort to throw it into question. (One would think the Statesman, for all its faults of attention, has been covering Barton Springs long enough to know the limits of "the best science.") And key girders of the Statesman's edifice are nothing but supposition, unsupported by any evidence the daily bothered to report.

If the daily were as responsible as it has, repeatedly over the years, urged progressives, enviros, the city, and the Chronicle to be, it would have quit while still on solid ground. The Statesman could have simply reported the frighteningly high levels of toxins found at locations around the city, including the hillside above Barton Creek. It could have noted, with ample justification, that these toxins routinely find their way into the city's creeks and waterways, into recreational settings like Barton Springs, and into the drinking water supply. And it could have given due regard to its own data showing other urban creeks -- like Waller Creek, which flows right through some of Austin's densest neighborhoods, the UT campus, and Downtown -- are, in fact, much more heavily polluted than Barton Creek and Barton Springs. These facts are not exactly secrets, but to report them in detail would have been an exemplary public service -- even if the Statesman had written not one word accusing the city or the progressive community of committing sins against the public welfare.

But to do that would have been to support what progressives, and this paper, have been saying for 20 years -- that citizens are right to be concerned that Austin's increasing urbanization puts water quality at risk. (Indeed, the Save Our Springs Alliance has applauded the Statesman report, for this very reason.) To be even more specific, enviros have worried for a long time about the prospect of unknown toxic waste sites leaching into the waterways. This has been, as we all know, the subtext of a political battle in which the Statesman has consistently taken the other side. But the daily is entitled to change its mind.

Apparently, though, it hasn't, which brings us to the muddier ground of its questionable statistics. As the city tells it, the Statesman has used the wrong set of environmental standards, applied them to the wrong kinds of samples taken in the wrong places at the wrong times, shown little care in explaining precisely what it actually found, and in doing so vastly exaggerated the risk to public health.

This starts with the headline: "Toxic chemicals taint Barton waters." Neither the main story nor its associated graphics contain any test results for the water in either Barton Creek or Barton Springs, only for sediments. This is a meaningful distinction -- the chance that you will swallow or inhale sediment is pretty small compared to the likelihood of ingesting the water, and the standards set by environmental regulators are based precisely on the probability of exposure. It's the sort of distinction that newspapers with pretensions of Pulitzer-level grandeur are usually careful to make in their science reporting. Its absence does not set a hopeful tone for what follows. The Statesman raises, as Will Wynn suggests, what might be important questions about the city's own testing program and methodology. But for the Statesman to claim it has answered those questions -- that it is right and the city is wrong, on questions when even "the best science" has so often proved inconclusive -- would be hubris even if the paper had been less clumsy.

Onward Through the Coal Gas

But it gets worse. The daily has no proof -- none at all -- for its assertions that the city has ignored the toxics problem because it's been "distracted" by the enviro agenda to limit growth in western Travis County or that city staff didn't know or care about human health because they were too busy worrying about the salamander or that long-forgotten coal-gas waste is responsible for the contamination it found. This last point bears repeating, since the daily played it so prominently:

There is no evidence -- none -- that there is, in fact, a coal-gas waste pit in Barton Hills that's leaching into the creek. All the Statesman has is the speculation of one out-of-state expert who's never seen the site. The city says it has thus far found no signs of toxic fill in its borings around the Park Place Apartments, a not-irrelevant fact.

If, during its massive legwork, the daily had found any documentation of toxic dumping on the hillside, that would be another matter. (The Superfund site in New Hampshire to which the daily compares Barton Creek is an actual coal-gas plant.) But basing key conclusions on chemical "signatures" for compounds as (unfortunately) common as benzene proves nothing. It certainly isn't sufficient grounds for the Statesman to dismiss out of hand far more likely culprits -- and not just the city's chosen suspect, parking lot sealant -- and embrace the politically convenient theory of a long-ago, unaccountable source. (Indeed, way, way down in the story, the Statesman acknowledges that arsenic can travel into the pool from the springs themselves, after having entered the aquifer in runoff from sources far upstream. But this gets mentioned only after lengthy chewing and swallowing of the coal-gas theory.) The daily goes on to haughtily chide the city for not remediating this site that may only exist in the editors' dreams -- hardly a more fitting use of scarce tax dollars than, say, the Austin Music Network.

Of the broader political messages conveyed, not all that subliminally, by the Statesman, little need be said. We know what they think. Everybody got the point. It's certainly novel to see the daily claiming City Hall hasn't done enough for the environment. It would be cheering were the claim not so clearly tainted, just as surely as the hillside above Barton Creek. For decades, the Statesman has tried to undercut the efforts of Austin's environmental movement to protect Barton Springs. For the most part, the Statesman has failed. Now, the daily claims the environmental movement has itself failed to protect Barton Springs. Even if this were true, there's plenty of blame to go around. Wouldn't it be great if the Statesman claimed its share?