That's Entertainment: We Ain't Got a Barrel of Money -- So We'd Better Settle for a Barrel of Laughs 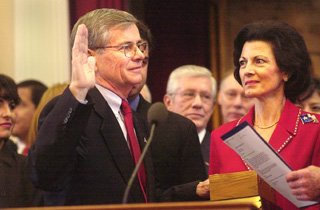 Tom Craddick of Midland, accompanied by his wife Nadine, was sworn in Tuesday as the new Speaker of the Texas House of Representatives. Craddick won the speakership by a vote of 149-1, with only Lon Burnam of Fort Worth voting against him. He becomes the first Republican speaker since Reconstruction, replacing Democrat Pete Laney of Hale Center. For more on both Craddick and Burnam, see "Capitol Chronicle" and "Naked City." (Photo By John Anderson)

Tuesday was supposed to be the Midland Republican's big, exclusive debutante delirium, as he accepted the mantle of "the first Republican speaker of the House since 1870." Next week Gov. Rick Perry and Lt. Gov.-elect David Dewhurst get a full-scale inauguration, after all, complete with barbecue, tie-and-tails hoedown, and something called Sixpence None the Richer.

All the House can manage, alas, is the Kenny Marchant/Dianne Delisi Chorus. But the speaker-very-presumptive could at least have expected to have the stage pretty much to himself, the assembled acclaim of virtually all of his colleagues (149-1, with Fort Worth's Lonesome Lon Burnam the solitary, quixotic holdout), and a day devoted more or less entirely to singing Craddick's praises, generating at least the 24-hour delusion that the heretofore undistinguished, monochrome GOP backbencher is everything the nominators and the adjectives described: "honorable," "dignified," "dedicated," "resourceful," "tenacious," "resilient," "visionary," "enthusiastic," "unique" ...

After two hours of that sort of thing, Craddick might have been forgiven for looking around suspiciously to see if somebody was wheeling in a casket.

So the occasion was celebratory enough, but nonetheless a great deal of the air had hissed out of the Capitol balloons the day before, when Comptroller Carole Keeton Yadda Yadda Yadda Strayhorn had finally made official the bad news that everyone but she had admitted for months: Texas is broke. Until (almost) Monday morning, Strayhorn had insisted that her original estimate of a $5.1 billion budget deficit remained accurate -- only to confirm at last that it had nearly doubled, to $9.9 billion, with $1.8 billion of that bill to fall due this August. Teasingly, Strayhorn had acknowledged as much a couple of weeks before, in the somewhat obscure and unofficial venue of a Texas A&M University commencement address, but on Monday she insisted that she and her number-crunching minions had worked through Sunday night to make certain they had accounted for every last available revenue dollar.

Strayhorn said she waited longer than usual to release the final numbers to enable "the most timely and complete information," but it will come as no news to Austinites that our erstwhile mayor had actually managed to string out the event (and the headlines) for nearly a month. First came the A&M teaser. Two weeks later, she unexpectedly announced her (third) wedding, this one to high school sweetheart Ed Strayhorn -- an occasion she used to berate the last Legislature for having thrown a "party" to spend "every dime available" of taxpayers' money. On Friday, she issued her encyclopedic budget-cutting recommendations, "Limited Government, Unlimited Opportunity," yet another excuse to pound the Lege for its wasteful and reckless extravagance. "The Lege dug this hole for themselves," Strayhorn declared, "but I'm throwing them a rope."

The longest length of rope (what a surprise!) is to roll back the Medicaid simplification passed last session by delaying it for several years. The simplification (not yet implemented) would eventually make it easier for the poorest working people in the state to apply for and maintain guaranteed federal health insurance for their children.

Strayhorn said that such rationing by regulation would save roughly $280 million for the biennium, but when asked how many children would therefore go without health insurance, she drew a blank -- the numbers, readily accessible in "Limited Government," are 161,000 in 2004, 187,000 in 2005. That prospect -- almost certain in the current Lege, since everybody in the new GOP majority keeps proposing it -- somewhat overshadowed Strayhorn's smiling declaration she was accustomed to "finding places to scrub" on her passel of grandchildren and great-grandchildren. It would have been churlish to ask, no doubt, if any of those darling descendants would soon be going without health insurance.

As One-Note Strayhorn continued on Monday to denounce the Texas Lege as a willful band of free-spending profligates "waiting to see how many sugarplums were stuffed into their stockings so they could merrily begin spending Texas tax dollars," somebody finally managed to ask what the governors were doing while the Lege was so recklessly and wastefully spending all that taxpayers' money. The thought did occur that when the budgets reached their desks for signature, both Rick Perry and before him George W. Bush were suddenly struck blind, deaf, and dumb. "I can't speak for the governor," quickly concluded Comptroller Strayhorn, as she bravely declared "a new era of fiscal reform."

The governor spoke for himself on Tuesday, congratulating the new speaker and echoing his pledge to resolve the deficit while promising "no new taxes" -- and doing all of this without a special session. Budget mavens -- I'll return to them next week -- say that because the comptroller's estimate is based not just on "No New Programs," but no state population growth and no inflation for the next two years, the actual deficit, to maintain current services, is closer to $15 billion (take that, California). It will take a good deal more than bipartisan scrubbing bubbles to find that kind of cash.

But those are next month's problems -- or maybe next summer's. This was Tom Craddick's week, and let us recall a few more of those memorable words of honor and obeisance flung in his direction. From Phil King, R-Weatherford: "Tom has the quiet style of leadership you see in a lot of Texas CEOs." From Kenny Marchant, R-Coppell: "His philosophy has always been consistent: He has no history of signaling right and turning left." From Diane White Delisi, R-Temple: "He's known the lonely struggle of the minority." From Ron Wilson, D-Houston: "He's a man of great moral character and extraordinary ability, and his word is his bond."

Last but certainly not least, let us recall with Vilma Luna, D-Corpus Christi, the unforgettable wisdom of that classic of American cinema, Spider-Man: "With great power comes great responsibility."