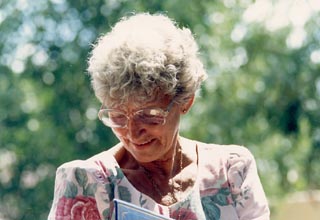 Before sunrise on the first day of 2003, Austin lost one of its most outspoken and fiercely protective champions of severely challenged children. They don't make many people like Rosemarie "Rose" McGarrigle. An early civil rights activist, McGarrigle was the founder and executive director of Hope House, or Casa Esperanza, a nonprofit residential home for children with mental retardation and physical disabilities. The 78-year-old woman died as she lived. Her strict, take-charge demeanor held fast until the end, said her son Patrick McGarrigle. "She was on the phone calling people, dictating orders, running Hope House. I still have the voice mail message she left for me," he said, laughing, recalling his mother's thick German accent as she gently scolded him for a chore he had performed at Hope House that did not meet her expectations.

A month earlier, Rose was diagnosed with acute leukemia. She was undaunted, however, having beaten previous health setbacks over the years -- lymphoma, a quadruple heart bypass, melanoma, breast cancer. Nothing, it seemed, could slow "Mother Rose" down. "I always wondered who wired this woman with so much energy," Patrick said. "I was just in awe of her."

The daughter of an actress and theatre owner, McGarrigle was born in Dresden, Germany. At 17, she served as a nurse's aide in Berlin during World War II and later received her nurse's training in the American Occupation Zone, where she had fled after the partition of Germany. She worked for a German psychiatrist at a facility for mentally challenged children whom he had saved from death during Hitler's regime. That experience was profound but short-lived. She met and married a master sergeant in the U.S. Army, the late Joseph McGarrigle, and returned with him to the U.S., settling in Philadelphia, where she shed her strong Catholic roots and joined the peace-loving Quakers (Society of Friends). When economic hard times hit the family, the McGarrigles and their children piled into an old Studebaker and moved to Austin in 1959, where they continued their involvement with the Quakers.

Patrick McGarrigle remembers his mother participating in demonstrations at Austin's segregated venues and forbidding her children to participate in air-raid drills during the Cold War era of the early Sixties. "We were always escorted to the office before the drills," Patrick recalled of his days at St. Elmo Elementary. "I got to know the principal pretty well." Later, during the Vietnam War, Rose supported her children's wish to wear black armbands to school -- a practice frowned upon by school administrators and some teachers. Eventually, she began focusing her energies on caring for mentally retarded and handicapped children, first in her home, then in the back yard of the Friends House. The center outgrew a couple of other locations before McGarrigle settled on a rolling site 28 miles from Austin, along the banks of Little San Gabriel Creek near Liberty Hill. Today, a Hope House staff of 28 is determined to keep McGarrigle's spirit alive in the 40-child residential facility.

"She had quite a knack for caring for these children's needs," said Dr. Ben H. White, a semiretired pediatrician who, with other physicians and dentists, attended to the children's health needs. "Her idea was that these kids deserved the same kind of treatment that other kids got. She was way ahead of her time in the way she cared for these kids." To that end, McGarrigle also insisted that the children experience all the pleasures of childhood. Each year, she took a couple dozen children to a summer home in Guadalajara, Mexico for four months. She called it their "summer camp." Her efforts did not go unnoticed. In September 2001, the Texas Pediatric Society presented McGarrigle with a Distinguished Service Award -- the highest honor given to a nonphysician.

In late 1989, following the death of a child in McGarrigle's care in Mexico, the Statesman wrote several articles critical of the summer home's relaxation of the standards set by what was then the Texas Dept. of Human Services. The Mexican home wasn't licensed, and under pressure from the daily, state inspectors visited it. While finding it in violation of certain space requirements, they deemed the place "pleasant and well-maintained," according to a Statesman follow-up. Dr. White, along with other physicians and parents, came to McGarrigle's defense. The death of the child was unfortunate but could not have been prevented anywhere, Drs. White and Karen Haslund wrote in a letter to the editor. White sarcastically recalls the newspaper articles as the Statesman's "discovery that there are flies in Mexico," a reference to a reporter's description of the conditions at the home. Characteristically candid, McGarrigle told the Statesman that, in Mexico, Hope House set its own standards of health, happiness, and emotional adjustment. "I march to a different drummer," she was quoted, "but I know what I want from life for the children given to my care, and that is normalcy, as much happiness as we can provide them with, and as much freedom as we can provide them with."

In her later years, McGarrigle renewed her relationship with the Catholic Church. She was buried Jan. 3, and on Wednesday, her children -- Tommy, Patrick, Daniel, and Illene (her husband, Joseph, and her eldest son, Michael, preceded her in death) -- and longtime friends gathered at St. Louis Catholic Church to celebrate her life. "We were so dependent on her," said Patrick. "She was everybody's Mother Rose."