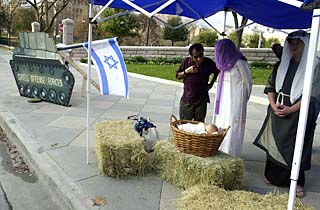 A mock Israeli tank on Dec. 23 in front of the Capitol represented the real siege currently occurring in Bethlehem. Activists from Austin Women in Black and the American Friends Service Committee set up this Nativity scene to point out the situation being endured by Palestinians, especially Christian Palestinians, who must live with occupying Israeli tanks surrounding the Church of the Nativity in Bethlehem. In a press release, the activists asked, "Would Mary, under current Israeli imposed brutality have managed to travel through checkpoints, road trenches, and dug-out roads and make it into Bethlehem in time for the birth of her son?" They complained that 17 Palestinian newborns have died in the last two years because they couldn't get through such barriers to medical treatment. (Photo By John Anderson)

Quote of the Week:

"The work is unglamorous, I realize. To some, it may seem like eating vegetables or doing chores." -- City Council candidate Brewster McCracken, telling supporters he's willing to do the heavy lifting required of the next council. McCracken announced Dec. 22 that he's running for the Place 5 seat currently held by Will Wynn, now running for mayor.

The Austin chapter of the NAACP is calling for the federal Dept. of Justice to enter the fray over the investigation of the Sophia King shooting. In a Dec. 24 press release, local NAACP President Nelson Linder asked the DOJ and U.S. Attorney General John Ashcroft to intervene in the matter. Among other things, the NAACP is asking that the DOJ "examine the actions" of the Austin Police Association, which they say has slandered Police Monitor Iris Jones and "threatened to render the [police monitor's] office ineffective." The NAACP is also requesting that the feds examine the actions of District Judge Paul Davis (who ruled in favor of the APA and halted the city's independent investigation into King's death) and "his relationship with the [APA]." The NAACP hopes that the DOJ will be able to reassure King's family that "we are a nation of laws and civil rights, and civil liberties must be respected and protected at all times." -- Jordan Smith

On Dec. 15, Austin artists Mo and Shahla Jamal received a letter from the Immigration and Naturalization Service telling them that their five-year-old application for political asylum has been denied, and they must leave the U.S. by Jan. 13. The Jamals left Iran 17 years ago because of political opposition to the Ayatollah Khomeini and came to the U.S. in 1994. The couple hosts the Persian Hour on KOOP Radio and founded the nonprofit Rumi Arts Society. According to Shahla Jamal, the INS refused their asylum request because they had already had asylum once, in Germany. Jamal says the family's German paperwork has expired, and the German consulate told her there is no mechanism to allow the family back into Germany. Hence, on Jan. 13 the couple and their four children face deportation to Iran where they are likely to be imprisoned for their political beliefs. The Jamals hope to appeal the INS decision. -- J.S.

As in years past, El Niño has been a brat to the West Coast but a good little boy here in Texas. After reaching historic lows last summer, water levels in the Edwards Aquifer are now among the highest on record. Major storms throughout the late summer and fall, spawned by the El Niño weather pattern in the Pacific, have soaked the aquifer, which provides almost all of San Antonio, as well as 50,000 or more Austin-area residents in the Barton Springs segment of the aquifer, with their drinking water. Meteorologists expect more of the same for the near future. -- M.C.M.

Beverly Kearney, women's track and field coach at UT, was severely injured Dec. 26 in an auto accident in Florida. The car, driven by former world champion hurdler Michelle Freeman, rolled over after crossing the median; Freeman's mother Muriel of Austin and UT Women's Athletics academic counselor Ilrey Sparks were killed in the accident. Kearney, a seven-time national Coach of the Year, underwent surgery in Jacksonville for serious lower back injuries; her condition has been upgraded to fair. On Saturday, Kearney received a call from President Bush that she described as "incredibly uplifting." -- M.C.M.

Though Austin ranks only No. 54 among the nation's media markets, we came in No. 4 in 2002 for the number of political ads -- 26,619 -- broadcast on our TV airwaves, reports the Alliance for Better Campaigns. Boston was No. 1 by a wide margin (carrying ads for races in four states), followed by Atlanta and Dallas; Houston was No. 5. Two stations in Waco -- KWTX and KCEN -- made the Top 10 among individual stations; KWTX ran more than 9,000 political spots in 2002. -- M.C.M.

While others shopped, the Travis Co. Commissioners Court labored on Dec. 23 and almost -- but not quite -- struck a blow against Waste Management, Inc. on behalf of Northeast Travis Co. neighbors of the trash titan's Austin Community Landfill. After hearing complaints from Northeast Action Group leader Trek English and other landfill neighbors, Commissioner Ron Davis moved that the court rebid Travis Co.'s current waste-disposal contract with WMI. Davis was backed by new Commissioner Gerald Daugherty, who said "I'm willing to send a message to a giant corporation that they need to take care of the residents of this community." Reps from WMI told the court the company wasn't aware of the specific issues raised by the neighbors with regard to the Travis Co. contract, but commissioners were unconvinced. However, after deliberation, the court agreed to a 30-day extension of the current WMI contract while county staff explore modifications that would address community concerns. -- M.C.M.

If you wondered what that weird white mud on your car was Christmas Eve, it was volcanic ash from Mexico's Popocatepetl, carried all the way to Central Texas by a fluke alignment of upper-level winds. The "Smoking Mountain" has seen intermittent minor eruptions since its last big blowout in 1994. -- M.C.M.

Members of Parliament have asked the British government to intervene in the case of John "Jackie" Elliott, sentenced to death for the 1986 rape and murder of 19-year-old Joyce Munguia in East Austin. Elliott, whose execution by lethal injection has been scheduled for Feb. 4, was born in Suffolk, England, where his father was stationed in the Air Force, and is viewed as a British national by the UK, which opposes the death penalty in all circumstances. Munguia was raped and then beaten to death with a motorcycle chain under an Eastside overpass; Elliott has consistently maintained his innocence. -- M.C.M.

In case you missed it while you were out being weird, Austin is one of America's Top 10 places to live -- not only according to Money magazine, but also to the "lifestyle-focused" Fine Living cable network. The TV channel's list of "Perfect Places to Live in America" puts Austin at No. 3, after New York City and Grand Marais, Minn., an artsy village on Lake Superior. Other professionally charming places -- like Seattle, Santa Barbara, and Sedona -- round out the list. Austin is "the home of creativity and casual style, and the president happens to like it, too," reads a network press release. He does? -- M.C.M.

Why AISD Wants and Needs a $2.4 Billion Bond Program
Equity is not cheap