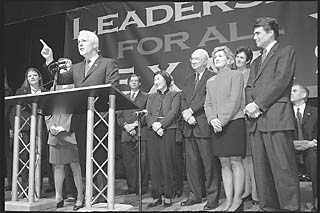 STORY OF THE YEAR, 2002: The War On --: 2002 began with a war on Afghanistan, and 2003 is likely to begin with a war on Iraq. Somewhere in between proceeds a "war on terrorism," although progress on that front -- the official crusade of post-9/11 America -- is a little bit cloudy. There are some anonymous guys locked up incommunicado in many and various places, and in November we zapped a few in Yemen with a drone-operated remote control missile -- but Osama's still AWOL, No. 1 with a bullet...

1. The elephant ballet: Juiced by war fever and a me-too campaign from the Democrats, the Republicans took back the U.S. Senate for a White House and Capitol trifecta. The state GOP did even better, capturing the House for the first time since Reconstruction. The conventional wisdom now declares that the Dems lost because they "abandoned white voters" -- might we just as conventionally conclude that white Texans still won't vote for nonwhite candidates?

2. City budget crisis: Toby Futrell became city manager by acclamation and then had to preside over the collapse of City Hall's fiscal health. She managed to produce a nearly balanced budget without layoffs or super-drastic service cuts -- but as the year ended, declines in both sales and property tax promised to undo most of her handiwork.

3. Sick hospital: If they handed out annual awards for PR disasters, the Seton Healthcare Network would sweep the '02 competition. The nonprofit corporation touched off a custody battle over Children's Hospital at Brackenridge -- a city-owned medical complex that Seton leases and manages -- when it arbitrarily decided the highly profitable Children's needed a new home ... that Seton would own. The plans threaten months of planning for a publicly financed hospital district and brought harsh judgment from community leaders. Red-faced Seton responded with a series of full-page ads (replete with kids and nuns), all touting the health care provider's commitment to children and charity. God bless us, everyone.

4. Stratus: Maybe you can't fight City Hall, but you can always raise hell. That's how hundreds of our local citizens spent the long, hot summer -- in council chambers to protest a $15 million sweetheart deal the city was predictably close to signing with Stratus Properties, which plans a megadevelopment over the increasingly threatened Edwards Aquifer. It was disappointing, sad, a little pathetic, really, watching City Council members righteously defend their 6-1 vote before repairing to the nearest bar with their new best friends at Stratus.

5. Roads, roads, roads: After the end-of-2001 passage of a huge county road bond package, transportation remained high on the local agenda throughout the year. As the state finally cut a deal to start building SH 130 -- which became part of Gov. Rick Perry's enormous Trans Texas Corridor plan -- enviros scored a victory with the abandonment of SH 45 South across the aquifer, while I-35 expansion mobilized the center city. The year ended with the creation of the Central Texas Regional Mobility Authority, a mini-TxDOT designed to build bigger, better roads faster.

6. It grows on you: When the state sued Farmers Insurance Group for overcharges and illegal rates and fees, Farmers announced it would abandon the Texas market altogether, leaving 700,000 homeowners in the lurch. Farmers claimed that too many mold claims and weather disasters had cut into its Texas profits, and it had no choice -- at the same time it was pouring money into state election campaigns. Following the Republican victory, the state and Farmers came to terms, in a $100 million settlement that consumer groups call a giveaway to the company. A couple of weeks later, an appeals court slashed the notorious $32 million Melinda Ballard mold settlement to $4 million -- don't hold your breath waiting for rates to drop.

7. Sophia King shooting: On June 11, Austin Police Dept. officer John Coffey fired the single round heard 'round the city. APD and a Travis Co. grand jury cleared Coffey of any wrongdoing in the shooting death of diagnosed schizophrenic Sophia King, but the wave of controversy continues as a test run for the new police monitor's office and the citizen review panel. Meanwhile, no one seems to be asking how and why it came to pass that King was left to decompensate alone in a housing project apartment.

8. Downtown crisis: The bust was bustiest in the urban core, as the Smart Growth agenda shipwrecked and Downtown occupancy rates and property values plunged. The year began with the city having to buy back its own land from Computer Sciences Corp. and ended with battles over two-way Great Streets, Downtown mobility, Smart Growth subsidies for Sixth and Lamar, and where to put the new U.S. Courthouse.

9. City elections: Though few Austinites were paying any attention -- fewer than 10% voted -- the May City Council elections provided enough emotional intensity and melodrama to satisfy any center-city policy wonk for months. While Place 1's Slusher vs. Mitchell contest pitted old friends in a bitter battle for the enviro vote, Place 4's three-way race among the killer B's signaled a new political career for former assistant city manager and victor Betty Dunkerley, the apparent end of incumbent Beverly Griffith's, and the impressive debut of young attorney Brewster McCracken, returning for this May's upcoming showdown. Mayor Pro Tem Jackie Goodman had no problem holding her Place 3 seat -- but shared with Slusher the distinction of being sued for campaign-related activities. And speaking of changes at council...

10. Goodbye, Gus: As the year ended, Mayor Gus Garcia announced he wouldn't run for re-election, signaling the end of a political career spanning four decades and leaving the dais wide open for the next generation of political leaders.