A controversial Southeast Austin housing project rushes to open by a Dec. 31 deadline for federal support. 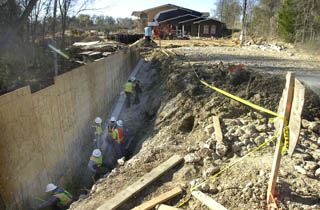 Perhaps the principals of King Fisher Creek Ltd., the owners of the controversial Parker Springs condominiums in Southeast Austin, used to write their term papers the night before they were due. Because now, they're basically pulling an all-nighter to complete the hotly contested low-income housing complex before they forfeit their federal tax credits Dec. 31.

The King Fisher owners -- led by Austin engineer Carl Conley and Tampa, Fla., developer Thomas McMullen -- have until year's end to finish and rent 35 low-income housing units in Parker Springs, or else the Texas Dept. of Housing and Community Affairs will take back the $2.2 million in federal tax credits granted the project. This might scuttle the development at 4601 E. St. Elmo.

The Parker Springs site lay mostly dormant during the summer, usually the busiest construction season. Activity stirred again on the site in late August and picked up during the fall as King Fisher scrambled to meet its TDHCA deadline. Residents of the nearby Kensington Park neighborhood, which vehemently fought the project, are puzzled by the sudden spurt of activity and quietly hope the development is abandoned or sold. "We just hope it turns into a good project," said the neighborhood association president, Lee Sloan. "It's sort of a real mystery to the people in the neighborhood. All we can do is sit and watch."

Controversy erupted last winter after Kensington Park residents learned about King Fisher's plans for a three-building complex on a 4.5-acre site that contains city-recognized wetlands and two creeks in the 100-year flood plain. The TDHCA had already approved tax credits for the project two years before, under a federal program designed to spur private developers to build housing for low-income residents. Neighbors had no problem with that, but were outraged that they weren't informed.

Despite the TDHCA approval, the neighborhood association and the Southeast Corner Alliance of Neighborhoods (S.C.A.N.) fought against city approval for the development, arguing that the King Fisher plan harmed the environment and was too dense for such a small tract. The city agreed in part, nixing some of King Fisher's more elaborate design features, including athletic facilities and a computer area; a scaled-down version of Parker Springs eventually won city blessing, though neighbors continued to fight the project. Last spring, the debate grew nastier, with King Fisher accusing neighbors of prejudice, and residents labeling the developers uncooperative and disrespectful. At one point, Sloan received several threatening letters from King Fisher, including one that seemingly warned of a lawsuit against neighborhood groups.

Beyond that, S.C.A.N. members were angry with the city and TDHCA, saying the Southeast had already absorbed its fair share of low-income housing complexes. If more were planned, S.C.A.N. argued, the city should at least inform neighbors so they could work with developers, especially those from out of town who might not realize they were building apartments on a 100-year flood plain.

The situation calmed over the summer, as the city and TDHCA inspected the site weekly. The state agency set an October deadline that was extended when it became clear King Fisher had no hope of meeting it. Charles Nwaneri, co-manager of the tax credit program at TDHCA, said the deadline was extended to Dec. 31 due to construction delays caused by poor weather and to the heavy scrutiny from the neighborhood and city. City inspectors cited King Fisher for several minor building code violations that were subsequently corrected, said Janet Gallagher, city deputy building official, infractions that are common with a project this size.

Construction picked up in the fall, with workers hurriedly pouring foundations and building frames. Currently only two buildings are framed, but McMullen insists that all three will be built. The first building is furthest along, according to city records, with workers installing insulation. Gallagher said King Fisher applied for "after-hours" permitting, usually an indication that a developer is rushing.

Nwaneri said it's possible King Fisher could cobble the complex together in the next week, but TDHCA is preparing for both contingencies. Once construction is complete, city inspectors must verify for TDHCA that 35 Parker Springs apartments are finished and rented. If not, TDHCA will take back the tax credit money and grant it to another project, at which point King Fisher must decide to either finish the development without government help or sell it. When asked what he would do if King Fisher failed to meet the deadline, McMullen said "We're not going to speculate on hypothetical situations."

Some neighbors speculated the last-ditch building push was an effort to gain tax credits for another King Fisher development in San Antonio. But Nwaneri says that project has likewise already won TDHCA approval, though forfeiting tax credits at Parker Springs would hurt King Fisher's chances of being awarded housing credits in the future. Sloan said he's had no contact with King Fisher since last spring, but wouldn't mind if the group sold out to a more neighborhood-friendly builder. "All we can do is sit back and wait," he said.