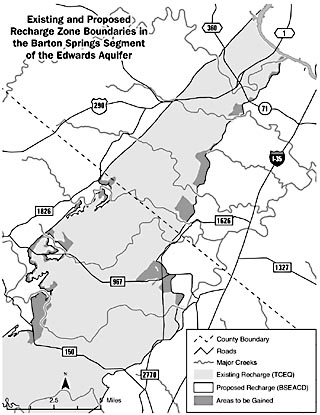 Area landowners may face tighter development restrictions next year if the state agrees to expand the recharge zone of the Edwards Aquifer. The Barton Springs/ Edwards Aquifer Conservation District wants to add another 8.5 square miles to the existing recharge zone, or environmentally sensitive area, which now covers about 89 square miles of Travis and Hays counties. The agency's petition will undergo a six-to-nine month review by the Texas Commission on Environmental Quality. As proposed, the new boundaries would take in a large patchwork of land along Brodie Lane and Slaughter Lane in Southwest Austin, as well as various tracts from Town Lake to south of Ben White. But the largest areas subject to change are in Hays Co., where BSEACD officials may face their strongest challenge. Brian Smith, the agency's assessment program manager, says the conservation district relied on science and geology to determine the expansion areas. The state "is going to want to see that we can substantiate the need for this change," he said. "They're going to see that we've done our homework."

The proposed boundary changes have already raised the ire of some Hays Co. property owners facing the prospect of stricter development rules. One longtime ranching family, for example, had been weighing opportunities beyond cattle grazing on their property along FM 967 and FM 1626, in northeast Hays Co. -- a hotbed of building activity the last couple of years. The family has retained an environmental consultant, who may present evidence to the state that challenges the district's findings. At issue is the permeability of the family's land over that portion of the aquifer known as the Georgetown Formation.

Officially, more than 45,000 people rely on the aquifer as their sole source of drinking water, but that figure could realistically be substantially higher; it was drawn from 1995 statistics. To Smith, the issue of limiting bricks and mortar over the aquifer is fairly simple: "You can do more damage to the aquifer with high-density development than you can with low-density, or no development at all."