Where Dragons Lie: City Hall Girds for the biennial march up granite mountain 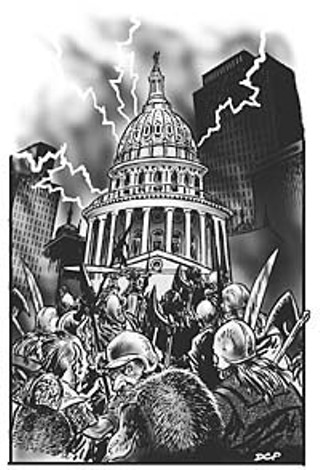 Some time back, the crack investigative reporter (what kind of crack, we're not sure) at one of the local TV stations reported, with appropriate shock, that the city of Austin spends your tax money on lobbyists. Apparently, this "news" did not motivate the populace to grab their staves and pitchforks, because the City Council last week was able without incident to spend more of your tax money on lobbyists, hiring a team and adopting a legislative agenda for the 2003 session.

Much has changed, as you probably noticed, since the last time the dragons came to Granite Mountain, and you can see that both on the lobbying team and in the legislative program. The most newsworthy addition to the team is Dick Brown, who has lobbied for Austin in the past but spent recent sessions working for Stratus Properties, helping whack Austin with the legislative stick of HB 1704, the mandate that "forced" Austin to cut a deal with the Southwest developer. After the last election, it only makes sense that Austin would look for lobbyists who speak Republican. But the symbolism of Austin hiring its past enemies is only of passing interest; the city's current challenges before the Lege are much different.

And perhaps better, at least compared to the situation in 2001 and in 1999 -- when then-Mayor Kirk Watson got the city to spend more than $1 million on shiny lobbyists (almost twice what Austin plans to spend this session) and spent almost all his time and charm personally schmoozing lawmakers, and for his trouble got HB 1704 shoved down his throat. This time around, environmental issues -- on which Austin has pretty amply demonstrated it cannot win at the Capitol -- lie in the background. The No. 1 priority -- truth be told, the only real priority -- for the city this session is getting enabling legislation to form a Travis County hospital district.

The goal of district proponents has been to get all eight members (in both houses) of the Travis County delegation to sign off on a proposal, have that bill routed to the local-and-consent calendar, and get it passed while the other 173 legislators are doing something else. Ultimately, the state has no skin in the hospital-district game -- every other major Texas city has one, and they have not caused the collapse of the state's health, welfare, or morals, and Travis County voters would still have to approve a district in an expected November referendum. So a painless passage through the Lege is not out of the question.

But we all know that "Austin," "Legislature," and "painless" do not often occur in the same sentence. The most powerful local legislator, if you can imagine, is now GOP Rep. Terry Keel -- whose district includes plenty of Travis County residents who, almost inevitably, would end up paying higher taxes than they do now for a hospital district providing indigent care that few of them would ever need. Obviously, the issue isn't that simple, but it can easily be made that simplistic, and given Keel's antipathy to both City Hall and the Travis County Courthouse -- dating back to his contentious tenure as sheriff -- he and his junior sidekick Todd Baxter could easily decide that a vote against a hospital district is a vote against raising taxes. (We should also not ignore the fact that health care is big business, and big business gets its way at the Lege, and in Austin's case the biggest business -- Seton Healthcare Network -- is also a "faith-based" organization.)

Despite the attempt to consider the hospital district in isolation, it will in reality be shadowed by the Lege's biggest challenge this session: balancing the budget. This will probably be done on the backs, if not the graves, of the poor and sick, which is bad news for the Austin public health system that would be inherited by a hospital district. The Lege program also includes calls for preserving, and in some contexts increasing, state funding for Medicaid and children's health insurance. With the current fiscal climate and the GOP conquest of the Capitol, such goals are, shall we say, ambitious.

What a City Wants

In its way, though, the new Republican majority may change Austin's dysfunctional relationship with the Lege for the better. With the dissolution of the Tory Democrats as a force to be reckoned with, Austin's needs, ideas, and agendas may no longer seem so freaky to the majority in both parties. It may become easier for Austin to build solidarity with other Texas cities and see success on a bona fide statewide urban agenda, the kind of partnership that was so glaringly absent on 1704. Even though the Democrats in today's Lege are a distinct minority, they are overwhelmingly an urban delegation, and the process of mutual back-scratching between them and suburban GOP conservatives has already begun.

What Austin wants this session, as evinced by the Lege program, is not much different from what other Texas cities want, including cities where Republicans live. Many are worried about losing their annexation powers in a time when tax base is declining. Many want to preserve their ability to regulate their extraterritorial jurisdictions and their public rights-of-way. (Right-of-way regulation is a high-priority item in the city Lege program; the Lege in 1999 gave Internet providers carte blanche to tear up Texas' streets, with ugly consequences. Perhaps in response, this year's Austin lobby team includes several members who have represented Southwestern Bell.) And many urban and suburban counties are ready to fight harder than before for more authority to regulate land use -- a process the Lege started with baby steps when it passed SB 873 two years ago -- if only as a defense against the scary cities and their ETJ power.

To movement conservatives, and to the business lobby, these things are of course anathema, and it's not hard to imagine attempts, instead, to deregulate land use as never before. Past sessions have seen bills that would effectively eliminate the power of cities to rezone land against the owners' wishes or to charge franchise fees to utilities using the public rights-of-way, ideas that are just as wacky and unconservative (in the true sense of the word) as anything Austin has attempted. Such things will likely be tried again, if the new dragons can find the time in between passing ineffective voucher programs and useless prohibitions against gay marriage.

But cooler heads can prevail if Austin can remind GOP leaders that their constituents, too, are dealing with the consequences of unregulated growth. The city has, at least, an opportunity to demonstrate, on a new playing field, that it did not, in fact, break off from a distant planet and land in Texas, but is trying to solve problems that affect the whole state.