The family of late UT professor Bill Gardiner says an improperly performed street cut led to his 2000 death in a bike crash. 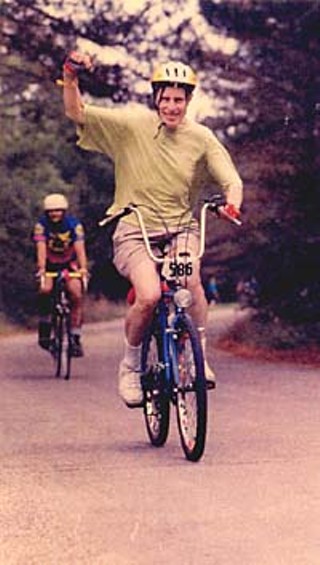 The family of late UT professor Bill Gardiner claim he was killed when his bicycle hit an improperly laid metal plate on a street excavation project.

In late 2000, Downtown construction projects were a commuter's worst nightmare. At one point, as many as a dozen competing telecommunication companies were randomly tearing up streets to lay utility lines -- thanks to a new state law allowing them to bypass the usual city hurdles required to perform the work. This fiber-optic frenzy, compounded by the surge of new office and condo projects, prompted even city officials to concede that road closures and traffic gridlock had gotten out of hand.

Some of the chaotic tenor of those heady construction days was played out before Travis County jurors last week in a wrongful-death case brought by the family of a UT professor who died from injuries sustained in a bicycle accident. The plaintiffs claim that William "Bill" Gardiner, a world-renowned combustion expert, lost control of his bike after striking metal plates covering a street excavation project at Guadalupe and Sixth.

Tri Dal Excavation and Utilities Inc. and its parent company are defendants in the lawsuit filed by Gardiner's wife, mother, and three daughters. The plaintiffs claim the metal plates were improperly installed, causing Gardiner -- traveling south on Guadalupe at a speed of 25 to 28 mph -- to flip headlong over the bike's handlebars, breaking his neck.

The 67-year-old Gardiner, a soccer player and avid cyclist who had logged thousands of miles on his bike through Scot-land, the length of the California coastline, parts of Texas, and to and from work and home every day, died at Brackenridge Hospital on Nov. 17, 2000, three days after the accident. He remained conscious and alert for roughly two days after the crash, according to family members' testimony, but was removed from life support after his lungs filled with fluid and doctors determined his condition was irreversible.

To back up their claim, the plaintiffs point to photos of the metal plates that were taken the morning after the accident and again later that day. The latter set show the plates had been adjusted with additional asphalt; the Gardiners' lawyers argue that the plates were repaired after Tri Dal officials learned of the accident. A family friend had been dispatched to the scene to photograph the plates that morning and afternoon, after a police officer, speaking to the family at the hospital, theorized that the plates were the most probable cause of the accident. A police report bears no mention of how the accident occurred.

The case is not a slam-dunk. There were no witnesses to the accident, and defense lawyers argue that other circumstances -- a car, a dog, a homeless person, or perhaps Gardiner's own negligence -- caused the professor to fall from his bike. Attorney Robert Tyler told jurors that there was little damage to the professor's bike and helmet to support that the accident occurred as plaintiffs allege. Both sides have bicycle experts to back up their arguments.

In testimony last Friday, jurors heard from Gardiner's daughters Amy Chanmugam and Elizabeth Baker and Gardiner's wife, chemist Regina Monaco. Lawyers Mark Einfalt and Ross Ehlinger guided them through tearful testimony, from the first phone call of bad news to the agonizing decision to remove Gardiner from life support to his last breath.

Gardiner, jurors learned, was a devoted father and husband, an avid outdoorsman, and a brilliant chemist. He graduated from Princeton in 1954, received a Fulbright scholarship to study at the University of Heidelberg and at Goettingen University in Germany and then obtained a doctorate in chemistry from Harvard University. He joined the UT faculty in 1960.

Chanmugam, an Austin social worker, recalled that her father had spent the Saturday before the accident shopping for birthday gifts for her and another sister, Charlotte. The two had joined Gardiner for breakfast the next day, Sunday, at Kerbey Lane Cafe. It was the last time Chanmugam saw her father before the accident. Monaco, Gardiner's wife of 11 years, was performing postdoctoral work in California when she learned of the accident. She had last spoken to her husband just moments before he left the lab for the evening.

The trial continued this week in the courtroom of Travis County Probate Judge Guy Herman.