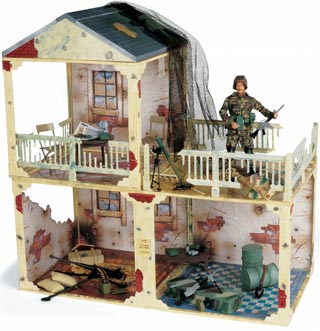 Dec. 7 marked the 20-year anniversary of using lethal injection as the favored form of execution. On Dec. 7, 1982 Texas inmate Charlie Brooks became the first U.S. prisoner to be executed by injection. Since then 644 others have faced the same fate nationwide, according to the Texas Coalition to Abolish the Death Penalty. This year alone Texas has executed 32 people, up from 17 in 2001 -- but below the record of 40 set in 2000. Most recent was Leonard Rojas, executed Dec. 4 for the double murder of his common-law wife and his brother, who he suspected were having an affair. James Collier of Wichita Co. was next up on the Huntsville death-mill roster, scheduled for execution as the Chronicle was going to press. Seven executions are scheduled for January, including Alva Curry of Travis Co. -- J.S. & L.N.

This Christmas season, JCPenney offers a totally ass-kicking, bullet-blasting toy to help kids get psyched up for Bush vs. Saddam II: the Rematch. Forward Command Post, which the department store describes as a "fully outfitted battle zone," comes with 75 pieces, including a pre-bombed home, a Barbie-sized toy soldier with toy weapons, and an American flag. All that is missing are the bodies of the dead family that lived in the house! You might also enjoy the World Peace Keepers Battle Station, which includes seven different guns and a cannon and will help kids (ages 3 and up, please -- let's be age-appropriate) appreciate America's war-is-peace foreign policy. If you'd don't care for JCPenney's style of patriotism in plastic, hie thee to www.jcpenneyeservices.com/csrv/emailus.asp and complain. -- L.A. At least he didn't reminisce about contented darkies picking cotton for ol' Massa. That's about the best to be said for Senate Majority Leader Trent Lott's remarks at the 100th-birthday celebration of his South Carolina colleague Strom Thurmond Dec. 5. Recalling then-Gov. Thurmond's 1948 Dixiecrat presidential bid, which had a single principle -- segregation now and segregation forever -- Lott remarked, "I want to say this about my state [Mississippi]: When Strom Thurmond ran for president, we voted for him. We're proud of it. And if the rest of the country had followed our lead, we wouldn't have had all these problems over all these years, either." After initially blowing off this cretinous comment as "lighthearted celebration ... of the man and his life," Lott released another, slightly better apology on Monday, after a weekend firestorm of criticism. The Washington Post's Howard Kurtz quoted Thurmond's charming 1948 campaign rhetoric: "All the laws of Washington and all the bayonets of the Army cannot force the Negro into our homes, our schools, our churches." The good old days, indeed. Yet Lott has hardly been alone in his hypocritical devotion to the barely functional Thurmond, who has to be physically propped up by aides and should have been required to retire years ago. -- Michael King