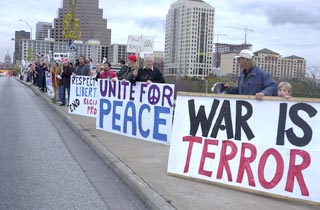 Coordinated anti-war protests were again held across the nation on Tuesday, including Austin. While it wasn't on the scale of October's rallies, organizers managed to get hundreds of people on the Congress Avenue Bridge and some were arrested while demonstrating outside the military recruitment offices in Dobie Mall. (Photo By John Anderson)

: "For powerful countries to adopt a principle of preventive war may well set an example that can have catastrophic consequences." -- former President Jimmy Carter, accepting the Nobel Peace Prize

The Austin City Council, bereft of consensus support for its own goals, kicked two-way streets and other Downtown mobility projects into limbo and put the Austin Music Network on three months of life support (see "Austin@Large" and "Dancing About Architecture"). On tap at the council this week: hearing the suddenly noncontroversial noise ordinance, setting Austin's legislative agenda and hiring lobbyists, and getting the final consultant's report on how to overhaul the city's cultural arts program.

Local leaders gathered for a regional environmental summit and agreed on the need for a plan to protect the Edwards Aquifer (see "Summit for the Aquifer").

Alarmed parents urged Austin ISD to not cut back on elementary music and art programs to make room for more physical education (see "Defending the Arts at AISD").

The way things work: The U.S. took immediate possession of Iraq's weapons declaration Monday, rather than wait seven to 10 days as previously agreed by all members of the U.N. Security Council. Council President Alfonso Valdivieso, Colombian ambassador to the U.N., overruled the vote after Secretery of State Colin Powell announced major increases in U.S. military aid to Colombia.