Trash of the Titans Offends Neighbors, City Board

Neighbors rack up more complaints about Northeast landfills -- and the city Environmental Board joins the fray. 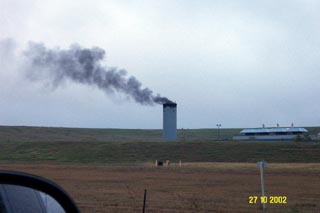 A flock of seagulls has made a comeback. Not the popular Eighties band, but the birds that used to hang out around the two landfills in northeast Travis County, scavenging for food. Last spring, neighbors complained to the landfill owners -- Waste Management Inc. and Browning-Ferris Industries -- about the gulls, vultures, grackles, and other species that often flew across surrounding roads to hang out on the garbage front -- in the process creating potential for car accidents. The two trash titans installed mechanisms to spook the birds away and limited their landfills' working faces. They also addressed other problems, most notoriously the smell of rotting, gassy garbage sometimes detectable more than five miles away.

Nevertheless, this past weekend Joyce Thoresen, who lives in the nearby Walnut Place neighborhood, photographed a couple hundred birds camped out on the fence by WMI's Austin Community Landfill. Thoresen has developed a nice hobby as a landfill documentarian of late: In addition to WMI's birds, she's shot berm erosion at BFI, as well as black smoke coming from BFI's methane gas pipe. Other neighbors have captured scenes of mud globs and dirt that they say are tracked in and out of the landfills by trash-hauling trucks from at least 22 counties. Harris Branch resident W.D. Carmichael took photos of his own after falling construction debris from a BFI truck banged his BMW (while he was driving), and dirt from a WMI truck smashed his windshield. While WMI has agreed to pay for a windshield replacement, "BFI has not done a thing about the body damage on my car," Carmichael says. "In fact, they haven't addressed that the incident has occurred," even though he says he notified them immediately after the incident.

After hearing numerous neighbor complaints and taking field trips to the landfill zone, the city Environmental Board last week passed a resolution recommending that the city explore "any avenues possible" to oppose the landfills' expansion plans until existing problems are addressed. Appended to the resolution is the text of an earlier version, passed March 6, that addresses many of the same problems, which haven't gone away despite the landfills' improvements, including better collection of gas and leachate (water that has come into contact with garbage), landscaping, and odor neutralizers. "Common sense tells us [these landfills are] polluting creeks and the air," said Environmental Board Chair Lee Leffingwell. "[E]veryone knows we need landfills. But there are landfills that operate without creating these effects on the community."

On the mud front, board members Phil Moncada and Tim Jones asked city staff why the landfills haven't installed on-site wheel washers to reduce the globs of gunk tracked across nearby roads -- a violation of city code. When told that the city hadn't issued any violations because the landfills respond quickly when alerted to mud problems, Jones replied, "Well, at some point, wouldn't you notice repeat violations?"

But the board has very limited authority, and whether anyone can or will act on their suggestion remains uncertain. "They're just the citizens' advisory group," says city Solid Waste Services Director Willie Rhodes. "[City] Council hasn't directed us to do anything on this issue for some time." Since the city has no power to regulate the landfills and can't dole out or deny permits that relate to expansion, it has taken a more laissez-faire approach than the landfill neighbors would like. Rhodes says he gets periodic updates from WMI, but hasn't touched base with BFI "for several months." The last time he visited the landfills was earlier this year.

Only the Texas Commission on Environmental Quality has any real power to regulate the landfills, and TCEQ recently approved BFI's application for a 10-foot vertical expansion permit -- a decision that Northeast Action Group President Trek English, the leader of landfill opponents, has appealed. Eventually, BFI would like to grow by 65 more feet; WMI is expanding into 55 acres for which it got an expansion permit several years ago.

At the Environmental Board meeting, English gasped when city Environmental Officer Pat Murphy told board members that since the city doesn't regulate landfills' operations, BFI was not required to file a site plan. Furthermore, staff at the city's Development Assistance Center found that BFI's plans posed no "significant issues" that affected city regulations. "We treat [the landfill] just like any other hill," he said. "I mean, it would be reviewed as if it were dirt." The city is considering a smaller piece of BFI's expansion puzzle -- a permit to alter existing drainage and change the Walnut Creek flood plain. Landfill neighbor Applied Materials has asked the city for 30 days to allow its engineers to study that proposal, claiming that BFI's plans could potentially impact runoff that already drains onto Applied's site from the landfill. City staff say they won't decide on the permit until January.