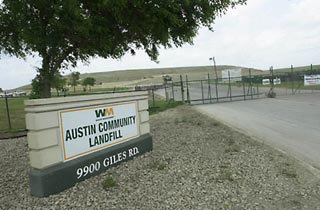 The entrance to a Waste Management Inc. Austin-area landfill. (Photo By John Anderson)

After complaining about the smell of rotting and gassy garbage for more than a year to anyone who would listen, neighbors of two regional landfills in northeast Travis Co. say their neighborhoods still stink to high heaven. And their frustrations with trash-titans Waste Management Inc., owners of the Austin Community Landfill, and its next-door neighbor Browning-Ferris Industries' Sunset Farms landfill, have steadily heightened since the odors began infiltrating their back yards, cars, and homes (see "Talking Trash," May 17).

Neighbors who have endured the smells have only grown bolder in their criticism of public officials and agencies that they believe haven't done much to help them battle the landfills, situated just north of U.S. 290 East. "Why does the mayor [Gus Garcia] care so much about banning smoking in bars, when we've got neighborhoods full of people who can't sit in their homes without smelling garbage?" one landfill neighbor grouses. "The complaints have been really bad in the past two weeks," adds Trek English, president of the Northeast Action Group that opposes the landfills. Meanwhile, relations between the neighbors and the Texas Commission on Environmental Quality, the state regulatory agency that oversees the landfills, are also strained. English says the agency no longer wants neighbors to file complaints with them but with the landfills only. "When I witness a crime, I don't call the police and the criminal," she says.

Representatives for WMI point to the nearly $2 million the company has spent this year to reduce odors and other problems, such as flyaway trash and birds. WMI has installed several extraction wells that capture the gases created by decomposing garbage, and will add more by the end of the year, says company spokeswoman Denise Fraser. They've also tried to reduce odors that arise when new trash comes in, mainly by installing a six-inch soil cap on the landfill's working face. On the PR side, WMI has hosted open houses and publishes a quarterly newsletter for residents and businesses in the area, but Fraser says neighborhood leaders haven't attended those meetings. "We've really gone out of our way to be communicative and responsive to our neighbors," she says. English says she and other landfill neighbors met with WMI for two years (until 2001), and want full documentation of the landfill's current expansion plans and other projects before meeting again.

Another part of WMI's outreach includes staying in touch with its neighbor BFI. After last winter's onslaught of odor complaints, in April the TCEQ cited both landfills for nuisance odor violations. (The agency hasn't yet sent the companies enforcement orders listing their penalties, due to delays caused by new sunset legislation requiring it to compile compliance histories on the many companies it regulates.) Though no BFI representative was available for comment, Barry Kalda, Air/Waste Section manager of the TCEQ's regional office, says BFI also has added new gas-extraction wells at Sunset Farms, and earlier this week was installing several more. Yet a new problem seems to have arisen at BFI, indicated by a photo taken by a neighborhood resident of the landfill's gas flare belching black smoke. Kalda couldn't comment on the photo, except to say that his office has accepted it as valid evidence and is determining how to use it.

Since adding the wells last spring, Kalda says, both landfills have doubled or tripled their gas flows to the treatment system -- meaning that gas that once "offended people's noses" is no longer going into the atmosphere. Over the summer, complaints fell dramatically, while those that did arrive in Kalda's inbox usually described the odors as "sweet" or "rotten." But the recent return of the gassy smell, and the increase in complaints, might indicate that the landfills are reaching their peak years of gas production and need to stay ahead of the curve, he says. Citing the recent improvements, Fraser of WMI asserts the odors could be originating from BFI, or one of the area's many other potential stink spots (for instance, the wastewater treatment facility or the sewage collection plant).

With no permanent corrective measure forthcoming, the trash ever-flowing, and the relationship between TCEQ and the neighbors "unhealthy," as Kalda put it, the northeast landfills promise to eat up even more time, money, and patience for all parties involved. On the city level, several members of the city Environmental Board visited with English and other landfill neighbors last weekend to discuss the landfills' outward and potentially upward growth. WMI is excavating a 55-acre tract of land permitted for expansion several years ago, and could be dumping trash there as early as April or May 2003. And BFI has received a 10-foot expansion permit from TCEQ (English has filed a motion to overturn it). In the Nineties, changes made to the federal Environmental Protection Agency's guidelines required landfills to better protect groundwater; since then, many landfills have shut down. The BFI and WMI facilities are now regional, accepting trash from hundreds of miles away.

At the county level, commissioners are preparing to resume their discussion of an ordinance that would create buffer zones between solid-waste facilities and homes, churches, and other people-friendly buildings located in unincorporated parts of the county. The ordinance has gone through several drafts, and many hours of discussion both on and off the dais. Commissioner Ron Davis, whose precinct includes the northeast landfills as well as many other eco-pits, tried to reintroduce the issue at the court's Nov. 19 meeting in an item asking the court to consider posting a notice of intent to adopt the siting ordinance, but he couldn't get a second. Davis believed the court was ready to take action on smaller facilities, but Commissioner Karen Sonleitner says that Davis' proposal went in a direction very different from what the court had agreed upon during past meetings, and "caught everyone by surprise." Acting after such a long break in discussion on the ordinance, she says, wouldn't have established a very good public record. "We need to get rebooted on some of these things."

Misunderstandings aside, the court will be taking up the ordinance issue sooner than later. But of course, no one expects it to fully resolve the long battle between the neighbors and the landfills. Some of the pressure on the county commissioners, Sonleitner says, is that the neighbors are "looking at us to be the white knights who can step in where the state has failed us."