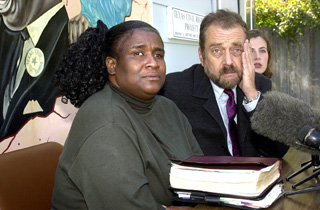 Sophia King's mother, Brenda Elendu, and the family's lawyer, Jim Harrington of the Texas Civil Rights Project, at a press conference announcing the TCRP's response to a temporary restraining order granted to halt an independent investigation into the June shooting death of King by an APD officer. (Photo By John Anderson)

After hearing nearly an hour of arguments late on Nov. 14, District Judge Suzanne Covington granted a temporary restraining order sought by the Austin Police Association and prevented the city of Austin from proceeding with an independent investigation into the June shooting death of Sophia King.

The APA sought the 14-day restraining order to allow time to resolve a contract grievance the union filed last week with APD Chief Stan Knee. At issue is whether the city violated its "meet and confer" agreement with the APA when city officials drafted standard operating procedures to guide the independent review in the King case without the approval of the APA board. The union sees the s.o.p.s as an amendment to the contract -- any such amendments must be approved by the APA board, Knee, City Manager Toby Futrell, and Police Monitor Iris Jones. The city argues that, because the contract says the s.o.p.s were "to be drafted," the union abdicated its right to draft the rules when they approved the contract last year.

As the APA sent notice to Knee that it intends to forward the matter to binding arbitration, APD assistant chief Jim Fealy ordered two officers to submit to interviews with the investigator chosen by the city to review the King case, Dallas attorney Stephen DeWolf. This conflict brought both sides to Covington's courtroom, with assistant city attorney Dana Johnson arguing that the city must proceed with the investigation now, since civil service laws only provide for a 180-day window of time during which an officer can be disciplined for any misconduct. "If the court does enjoin the city, [we] will lose the opportunity to take actions as a result of the investigation," Johnson explained.

But APA counsel Tom Stribling disagreed. Whatever questions may linger about the June 11 shooting can be addressed by APD's Internal Affairs Division without conflicting with the contract, he said. In the end, Covington agreed with the union. "I believe that the meet-and-confer agreement sets out within itself a procedure for the exhaustion of administrative remedies," Covington said in granting the TRO. Covington said she did not feel it was appropriate for the investigation to proceed until the matter has been worked out.

Tempers continued to flare Friday when Jim Harrington, director of the Texas Civil Rights Project -- who is representing King's mother Brenda Elendu in a lawsuit against the city -- announced he had filed to intervene in the TRO battle and have the injunction lifted. Harrington calls the APA's argument a "large puff of smoke" and will join attorneys for the city and the APA for another appearance in Covington's courtroom on Nov. 25.