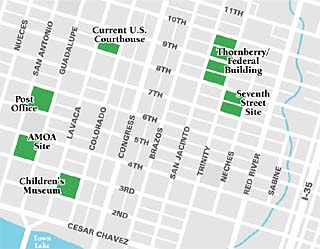 While the General Services Administration is looking all over Downtown for a site for the new U.S. courthouse, city leaders would like to see the project sited north of Sixth and east of Congress.

After an eruption of local outrage, the federal General Services Administration has backed off its plans to (maybe) displace the Austin Children's Museum or the Austin Museum of Art to make way for a new U.S. courthouse. That hardly resolves local concerns about the location, design, and construction of the $60-million-plus project, but key players -- at City Hall, the GSA, and the Downtown Austin Alliance -- are hopeful the worst will be avoided.

"The worst," traditionally, is what you get from a federal construction project, at least since World War II. Take the Downtown post office. Please. In fact, local leaders have suggested exactly that to the GSA -- "The people of Austin would rise up and call you blessed if you got rid of the post office and built a beautiful courthouse in one fell swoop," in the words of DAA President Charlie Betts.

While Betts characterizes the GSA's response to that idea as "lukewarm at best," the search for a site is still wide-open. According to the GSA's Len Murphy, the third site on the agency's original list -- Seventh and Neches, adjoining the Salvation Army -- could well be displaced by other locations that might be brought to the table. Indeed, although the Children's Museum has made quite clear its desire to stay where it is, AMOA -- with construction plans for its Republic Square site currently on hold -- may still decide to offer it to the GSA, perhaps in trade for the current U.S. courthouse on Eighth (to be preserved and remodeled for museum purposes). But, "we haven't gotten any feedback from the [AMOA] and don't expect to," Murphy says. The agency would have to designate the Eighth Street courthouse -- a WPA project from 1935 -- as "excess" federal property before conveying it to AMOA or anyone else.

The Seventh Street site lies within a city-designated Capitol view corridor, which west-of-Congress sites like Republic Square do not -- although neither the view corridor nor any other local rules need apply to the GSA. The courthouse proposed would be just under 200,000 square feet, which, given the federal requirement (adopted after the 1995 Oklahoma City bombing) for a 50-foot setback between building and street, means at least 10 stories if erected on a single city block.

The GSA is now speculating about a block-and-a-half site, which could bring the project down a few stories but may involve vacating a block of Downtown street, which the DAA and city are likely to oppose -- much as they're unhappy about the loss of Ninth Street between the existing Federal Building and Thornberry Judicial Building, which houses the U.S. Bankruptcy Court. The agency did consider, but decided against, building the new courts atop the plaza that currently crosses Ninth Street.

Though Rep. Lloyd Doggett, who was instrumental in leading opposition to the GSA's taking the museum sites, has also expressed misgivings about the Seventh Street site, city and DAA leaders think that's the direction the GSA should be looking. "Any site in the northeast quadrant of Downtown" -- north of Sixth Street, east of Congress -- "would be a net positive for the city," says Council Member Will Wynn. "And the farther north and east, the better."

Wynn and DAA leaders agree that, in Betts' words, "the northeast quadrant hasn't been a hot area of Downtown, and a courthouse might give it a stimulus." As Wynn puts it, "Sixth Street and Red River do a good job of attracting people at night. What's missing is the daytime crowd. More folks walking the sidewalks and patronizing lunch venues will really help that immediate area."

Of course, if the GSA erects an eyesore, a fortress with 50-foot setbacks and all the charm of most latter-day federal buildings, we might not be talking about a net positive. But this is not your father's GSA -- they "truly seem to have finally abandoned the Stalin School of Architecture," says Wynn. "This building is going to be secure, but I fully expect it to be one of the most beloved pieces of architecture in Austin in a generation -- exactly what a federal courthouse should be."

The GSA has selected the Atlanta firm of Mack Scogin Merrill Elam (husband and wife; he's the former chair of the Harvard architecture program) to lead the Austin courthouse design team. Compared to the federal standard, at least in Austin, it's a fairly radical choice -- although a hard one to envision in practice, since most of Scogin and Elam's noted works have been much smaller (houses, including their own, along with two stunning branch libraries in Atlanta).

According to Murphy, the design team, which includes PageSoutherlandPage (of course) as the local lead, "has a lot of work to do" dealing with the architectural program even before a site is chosen. "It would be nice if they could start working on the concept at a specific location," he says, "but they'll just have to wait a little while." Once that time comes, Murphy says, typical GSA practice is to solicit feedback from the community, as well as from the building's users, to inform the final design decisions made in D.C.

As for site selection, the DAA -- which only found out about the project when tipped off by local architects who'd been approached by the GSA -- isn't waiting to be asked. Encouraged by the GSA's willingness to go along with Austin sentiment and drop the museum sites, the DAA is preparing its own suggested criteria for the agency to use as it settles on a site. "We're under no illusions that we're making this decision," Betts says, "but we want to get the community's criteria on their desk. And we'd also like to use those criteria to become an advocate for the right sites, rather than a critic of other ones. We're trying to be proactive."

Betts and Wynn both agree with Doggett that, in the congressman's words, "Downtown Austin has plenty of space for both our museums and a new courthouse." And civic leaders hope Doggett is right when he says, "Now that we have the attention of the federal bureaucracy, I believe that we can work together toward a pleasing addition to the architecture and aesthetics of our downtown area while providing a useful space for our justice system."