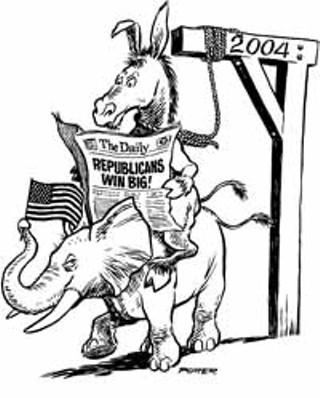 Quote of the Week: "Charter schools should not be shut down simply because they are not meeting criteria set by bureaucrats in Austin." -- Chris Patterson, educational "expert" at the hard-right Texas Public Policy Foundation, whining after the state ordered closed five schools that have failed to meet state standards for three years running (see below).

After months of division in the Downtown community, the City Council declined last week to grant historic zoning to the Mexic-Arte Museum, allowing the museum to continue with its expansion plans. Another Downtown feud -- over two-way streets -- has been postponed until next week.

State Rep. Tom Craddick of Midland, joined by 100 of his closest legislative friends, celebrated his all-but-assured election as Texas' first GOP speaker of the House since Reconstruction (see "Capitol Chronicle").

The Live Music Capital will in 2004 become an official American Capital of Culture. Austin was so designated this week by a group allied with the Organization of American States and the European Union (which has selected its own "cultural capitals" for years; there, it's a really big deal). Austin is the first U.S. city to be picked in the five years of the American initiative -- it will share the honor in 2004 with Santiago, Chile.

Farmers Insurance postponed its threatened Texas pullout for 30 days as it negotiates with state leaders; meanwhile, at least four legislators have pre-filed bills to tackle the state's spiraling home insurance crisis. And the woman who started it all, Melinda Ballard, filed her second suit against Farmers this week -- this time, for libel (see below).

After projections showing nearly one in four third-graders -- over 64,000 students statewide -- would fail the reading test mandated under the new Texas Assessment of Knowledge and Skills test, Education Commissioner Felipe Alanis recommended lowering passing standards until more students can meet the requirements.

Former City Hall fixture Marcia Conner is in deep trouble in Durham, N.C. -- where she's now city manager -- for questionable city contracts given to, among others, her Austin friends (see below).