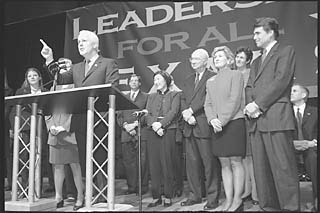 Nationally and statewide, the GOP put its Bushean stamp on most of the country -- control of all three branches of the U.S. government (four, if you count the Supreme Court, which you should) -- and Texas, reaffirming its grip on all statewide offices. On Wednesday morning, Dem gubernatorial candidate Tony Sanchez finally conceded to incumbent Gov. Rick Perry. (For the Chronicle election wrap-up, see Dream On, Dream Team).

As the polls were closing nationwide Tuesday night, Securities and Exchange Commission Chairman Harvey Pitt resigned, citing "the turmoil surrounding my chairmanship" in a letter to President Bush. Pitt had been under fire for a lax attitude toward regulatory enforcement as well as irregularities in the appointment of William C. Webster to the SEC's accounting oversight board.

Late Wednesday, the U.S. Supreme Court stayed Texas death row inmate James Colburn's execution for the 1994 Conroe murder of Peggy Murphy. Colburn, 42, who has suffered from paranoid schizophrenia since the age of 14, was scheduled for execution Wednesday night (see Beyond City Limits).

Despite continuing debate over the effect of its plans on a potential hospital district, Seton Healthcare Network persisted in its abruptly announced plans to construct its own new Children's Hospital at I-35 and Parmer. The current Children's Hospital at Brackenridge is the only profitable segment of Brack and is presumed crucial for the financial viability of any hospital district.

The ACLU of Texas filed a federal lawsuit alleging racial discrimination over a series of drug busts in Hearne, Robertson County (north of College Station). The busts in November 2000 were based on the testimony of a single informant recruited via a plea agreement, and led to the arrests of 15% of the African-American men in Hearne between the ages of 18-34 (see Beyond City Limits).

The UT baseball team, the defending College World Series champion, was put on two years' probation by the NCAA Wednesday. The violation concerns a volunteer assistant coach and his "job" at Centex Beverage (owned by former UT regent Lowell Lebermann), where the NCAA says he actually spent his "work" time recruiting, a violation of NCAA rules.