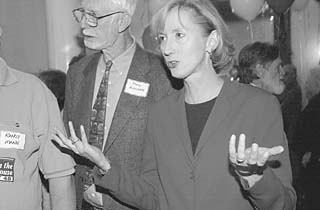 The Driskill Hotel's elegant second-floor ballroom has hosted better nights. On Tuesday, three separate Democratic campaign gatherings (for Kirk Watson, David Bernsen, and Ann Kitchen) grew more subdued by the hour as muted TV screens displayed an increasingly jubilant GOP crowd just blocks away at the Convention Center. Around midnight, as balloons and spirits deflated, the Driskill candidates, one by one, called it a night. Dist. 48 Representative Kitchen, determined to hang on until all the returns were counted, conceded shortly after midnight, when it was clear her numbers were too low to close the gap (which ended at 52-45%) on GOP challenger Todd Baxter. A former Travis Co. commissioner, Baxter is one of two new local Republicans added to what will now be a GOP-controlled House. That could spell the end for Democrat Pete Laney's Speakership and the beginning of an even more conservative era -- possibly under the darling of the GOP right, Tom Craddick, R-Midland, who could well be Speaker come January.

At press time, it was still uncertain if the GOP had achieved the 88 of 150 seats they figured to need in order to assure Craddick's ascension, but in any event it seemed unlikely that Laney himself could hold on to the Speaker's chair. Look for GOP "moderates," Brian McCall of Plano or the venerable Ed Kuempel of Seguin, to backroom arm-wrestle to replace Laney and short-circuit Craddick.

As things stand now, the local six-pack delegation is an even partisan split. On the other side of the aisle, Dem incumbents Elliott Naishtat (Dist. 49) and Dawnna Dukes (Dist. 46) handily won re-election, while newcomer Eddie Rodriguez (Dist. 51) easily succeeded retiring Rep. Glen Maxey.

The hardest-fought House battle was the Kitchen-Baxter race, where the relocated "incumbent" faced the daunting challenge of recapturing a district that had undergone a complete makeover in redistricting. The redrawn boundary lines were carefully designed to install a Republican, and Baxter, a former aide to state Sen. Jeff Wentworth, early on became the designated GOP choice. In fact, even prior to Kitchen's first election in 2000, GOP strategists were predicting two things for her future: a victory in 2000 against Republican Jill Warren (who wasn't all that popular in Republican circles in the first place) and a sound defeat in 2002 -- thanks to the GOP-laden demography of her new district.

Baxter ran a negative campaign from start to finish, with an onslaught of TV ads, push polls, and mailers shamelessly portraying Kitchen as a liberal big spender bent on raising property taxes. One mailer called Kitchen a liar. Along with the demographic advantage, Baxter's attack strategy obviously worked. Earlier in the campaign, some of Kitchen's advisers and supporters suggested that she fend off Baxter's blows by going on the offensive, "but that's not Ann's style," said one campaign staffer. "She just wouldn't do it." Kitchen, although clearly disappointed by the result of Baxter's strategic assaults, tempered her comments Tuesday night. "Our campaign," she said, "talked a lot about the issues, and while I would have hoped for a more positive campaign, I wish [Baxter] well. It's going to be a very tough session, and I wish all my colleagues well."

At about the same time Kitchen was making those comments, a gleeful Baxter was basking under fluorescent lights at the Crockett Center. Shortly after midnight, with 64% of the votes counted, he stopped just short of declaring an outright victory. "We're still looking very good, but we're going to wait for the very last numbers. We're very pleased with what we're seeing." Baxter said his conservative principles more closely matched the values of the district. "The voters chose to elect a real conservative vs. someone who was just pretending to be a conservative," he said. "When they sent out that mailer showing Ann Kitchen with Gov. Bush -- well, that's all I need to say about that." Baxter also indirectly declared his feelings toward former Mayor Kirk Watson, who had been widely expected to fare much better than he did. "I am ecstatic that Greg Abbott has won that race," he said. "He will be an outstanding attorney general, and the state of Texas will be outstandingly served by Greg Abbott. I'm very, very happy about that victory."

In the waning hours at the Driskill, Kitchen's supporters were cheered by at least one piece of news from another embittered House race: Rick Green, the controversial Hays Co. representative for Dist. 45, was losing his race to young Democratic newcomer Patrick Rose.