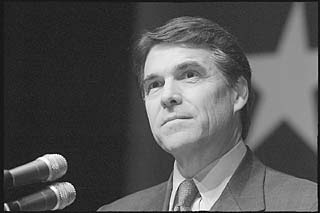 "Rick Perry on television reminded me very much of 1948," announced Tony Sanchez from the stage at the Hyatt. "I'm here to announce that we'll be fighting and giving him hell until the last vote is counted. ... This race is a long, long, long way from being over." The allusion, of course, was to Harry Truman's overnight upset of Tom Dewey in the 1948 presidential election -- although it's anybody's guess whether the cheering Democratic crowd, most of whom weren't born in 1948, recognized the reference. Sanchez spoke a few minutes after a theatrically somber Perry told a cheering crowd over at the Convention Center, "By the sovereign power of the people of Texas and by the grace of God, I am humbled to tell you I've been elected your governor for the next four years."

Even at 10:15pm, with only 29% of the statewide vote counted, Sanchez's defiance seemed more than a little quixotic: At that point Perry was up roughly 1.06 million to 713,000, or 59-39%. Even with plenty of urban boxes still out, those were overwhelming numbers, and by mid-morning Wednesday (89% officially counted), Sanchez had tightened the race by all of one percentage point.

Loyalists at the Hyatt echoed Sanchez for a while -- Mayor Gus Garcia called Perry's announcement "certainly premature" and Austin Rep. Dawnna Dukes (having handily trounced her Libertarian opponent in Dist. 46) noted that with boxes in the Rio Grande Valley and Houston still uncounted, the top four statewide races remained in play. Garcia was hoping that Lt. Gov. candidate John Sharp or AG hopeful Kirk Watson could pull off upsets in their races. Over at Republican Central, Sharp's nemesis David Dewhurst was the only statewide GOPer still hanging fire, but more than an hour earlier, Watson opponent Greg Abbott had already announced Greg Abbott's victory, in the Dolesque third person. "It's an honor to step out on this stage and tell you, with 1 million votes counted, Greg Abbott has about 57% of the vote," Greg Abbott said. "I am glad to tell you that Greg Abbott is going to be your next attorney general."

Across the river at the Driskill and Stephen F. Austin, the Democratic atmosphere seemed a little more realistic, at least at first. Shortly after Abbott's declaration of victory, Watson told a Dem crowd desperate for good news that he had come down just to say hello to supporters, "because it's gonna be a while." Watson said because so many boxes (and whole counties like Tarrant and Bexar) remained uncounted, it would be a "long, long night." In the end, it wasn't that long, and just after midnight Watson conceded. The Democratic dominoes went on falling throughout the night, as the GOP held their hammerlock on the statewide offices, the Supreme Court, and the Court of Criminal Appeals.

In the cold light of day, the Republican sweep could not be said to be surprising -- despite a relatively heavy turnout, the statewide Democratic base still simply lags significantly behind -- but the swiftness of it was indeed startling. An hour before the Republicans began celebrating, a subdued but affable Tom Ramsay (thoroughly trounced by incumbent Ag Commissioner Susan Combs) acknowledged that he and his colleagues were already "pretty pessimistic" after seeing the early numbers, and while John Sharp might still stand a chance, every other statewide race appeared lost. "It's hard to explain," Ramsay said, "since everyone on the statewide ballot worked every day for four to five months, and the crowds we drew everywhere were large and enthusiastic." Ramsay added that, nonetheless, it appeared "they [the Republicans] knew" what the Dems did not, since "they didn't seem to work much, except on TV, and they didn't seem to think they needed to knock on doors."

Ramsay frankly raised the Texas open secret. "I hate to say this, but it may have been a racial situation. I gotta feel that for some [white] people, they're just not ready for a Hispanic governor. When you've got 35-45% in either party and 20% in the middle -- that swing can determine the election. Hispanics are going to be a dominant force in Texas politics, and in a perfect world, for the sake of not dividing Texas -- you would hope that people would wake up to that. But they haven't yet."

Over in the John Sharp ballroom, one Dem loyalist was unapologetically willing to place blame directly on the party leadership. "Thank God for political parties," said Education Austin President Louis Malfaro, "or everyone in Texas would be a Republican. The party let itself be defined nationally and in Texas by Bush -- for God's sake, John Cornyn was running ads hanging Enron on Ron Kirk!" Malfaro predicted the party would likely not hold on to the U.S. Senate (he was right) and said, "As long as the Democrats are dancing around the margins instead of fighting them directly on the issues, that's what happens. The country is going to get a taste of a fully Republican regime, and we'll follow the guns into Iraq. Maybe then people will wake up and say, 'Is this really what we want?'"

Down at the Hyatt, Mayor Garcia was saying that if nothing else, Sanchez "had put some backbone and spirit back in the Texas Democratic Party -- $60 million buys a lot of backbone." On the podium, Sanchez was once again recalling Harry Truman, although characteristically forgetting another classic Trumanism: "If you run a Republican against a Republican, the Republican will win every time."