The city, APD, and police union haggle over what kind of "independent" review will be made of the King shooting. 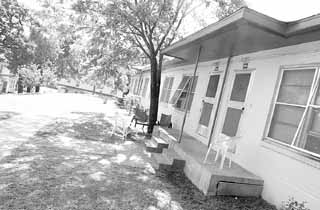 2105 Rosewood, the apartment complex where Sophia King was shot (Photo By John Anderson)

In a rapid succession of press conferences on Oct. 10, Austin Police Monitor Iris Jones and Police Chief Stan Knee announced that the city's police-oversight Citizen Review Panel had voted unanimously to recommend an independent investigation into the June 11 shooting death of Sophia King. Yet because of holes in the current police contract -- which created the civilian oversight system being used for the first time in the King case -- it is still unclear who will carry out the independent probe and exactly how it will be done.

The announcements were brief and tightly scripted. Jones said that she concurred with the seven-member panel's recommendation that the June 11 shooting be investigated further. Knee then announced that, although he believed that APD's own internal probe into King's shooting was thorough, he would accept the panel's recommendation for an independent inquiry. (If he hadn't, Knee could have been overruled by City Manager Toby Futrell, to whom Jones and the panel report directly.) "While I disagree with the recommendation," he read from a statement, "I realize that through months of negotiations a process was developed that created civilian oversight of our work."

Knee's announcement was greeted with some skepticism by rank-and-file officers, who told the Chronicle they believed that, once again, Knee was capitulating to community pressure and failing to stand up for front-line officers and the life-and-death decisions they have to make. (Indeed, Officer John Coffey, who fired the fatal shot, was conspicuously absent from APD's annual awards ceremony, where other officers involved in shootings this year were honored for their bravery and service.) Still, Knee was faced with a sticky situation and in the end chose the route that would let the oversight process, as designed and agreed to by the city, the police union, and APD brass, play itself out.

That said, what that process will look like is still unknown. The current "meet and confer" police contract between the city and the Austin Police Association lays out in meticulous detail how Jones' office and the panel will review complaints, including the provision for an "independent investigation." But amazingly absent from the contract are standard operating procedures for such a probe. According to APA President Mike Sheffield, those procedures are currently being worked out between Jones and the city. Whether those procedures are actually acceptable to the APA, under the terms of its current contract, remain to be seen.

The issues at hand are gritty ones for the union and have been ever since the police-oversight system was first proposed in 1998. Jones and her panel do not, themselves, do an independent investigation; they can only review what's already been done by APD's Internal Affairs Division. Officers can be compelled to testify to IAD, but that testimony is kept confidential; the APA, and many other police unions, have argued that making such statements public would violate cops' Fifth Amendment rights, and the U.S. Supreme Court has supported this stance. If an outside investigator in the King case can likewise only review what APD has already done, then it's hard to see what purpose it would serve.

But if what happens now is a completely new investigation, the APA has the chance to balk. According to the contract, amendments to the civilian-oversight process that do not "affect an officer's substantive rights" must be unanimously approved by Jones, Knee, and a majority of the APA's 20-member executive board. If an amendment would affect those rights, Jones, Knee, and Sheffield are required to try to hammer out a solution, and all sides are staying positive that this can happen. But it if doesn't, the contract suggests the matter would have to be addressed through meet-and-confer. The current contract expires in September 2003, and new talks are expected to begin in March. It's unclear whether the need for an independent review of the King case would cause meet-and-confer talks to begin sooner, or whether the probe would be delayed until a new contract -- spelling out these details -- is adopted next year.

It's almost inevitable that a truly "independent" investigation would, in the APA's view, involve its members "substantive rights." According to Sheffield, the union will not approve anything that breaches the contract's confidentiality requirements or jeopardizes any officer's constitutional rights. So unless the "independent review" is conducted under the purview of Internal Affairs, it would be unlikely that officers could be compelled to cooperate or that the results could be made public.

For her part, Jones told us that the panel's unanimous vote should not necessarily be seen as a condemnation of the actions of Coffey or any other officer. Because of the contract's confidentiality requirements, she said she couldn't go into details about the review panel's concerns. But she did say that its recommendation was based on a host of factors involved in King's death. This is "about the June 11 incident in its entirety -- not just Officer Coffey's involvement," she said. "This [review] will provide a fresh, unbiased view. This is the first time ever [for this process], and that's why it's important to accept it; this is part of the process agreed to. Let it work."