The I-35 expansion project runs into trouble as it tries to avoid "impacting" historic Eastside properties. 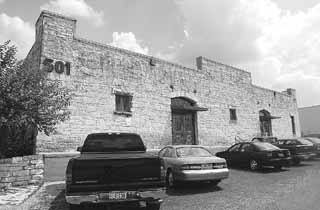 The 501 Studios, formerly the Robinson Bros. warehouse, is one of several East Austin buildings to recently get historic zoning; though it sits right on I-35, TxDOT needs to avoid "impacting" it and other historic Eastside properties with its freeway project. (Photo By John Anderson)

The expected haggling has begun between the Texas Dept. of Transportation and city officials over which East Austin properties are historic enough to survive the coming I-35 expansion. This corner of the bureaucratic swamp is called the historic property review -- a key component of the I-35 project's federally required environmental impact analysis -- in which city, state, and TxDOT officials determine if the controversial I-35 expansion would "negatively impact" any potentially historic buildings or properties. "Impact" would be a polite term for "envelop" or "destroy." If it wants to use federal funds -- which, of course, it must on a project this size -- TxDOT must adjust its plans to minimize those impacts on historic areas.

The massive I-35 project would revamp a 45-mile stretch of highway from Georgetown to Buda, adding two main lanes and elevated HOV lanes through Downtown, and require $2 billion and 10 years of construction. Critics of the plan say that it won't ease traffic congestion enough given the price, and that it will damage many East Austin neighborhoods. Opponents see the historic review as a way to possibly alter the design and minimize the project's injuries to their neighborhoods.

The I-35 expansion project has been in the works for nearly 15 years already, and TxDOT hopes to finish the historic review, along with the rest of the EIS, by this spring so it can move forward with finalizing schematics and applying for federal highway funds. They don't expect to start construction until 2010. Thus far, TxDOT officials have surveyed potentially historic properties along I-35's eastern lip from Town Lake to Seventh Street and presented their findings to city Historic Preservation Officer Barbara Stocklin, who said this week she has numerous objections to TxDOT appraisals. She said TxDOT schematics called for consuming several properties in the four-block area between Holly and Flores streets along I-35, an area Stocklin said she believes could qualify for historic district designation. "It's not just historic housing they're taking, but low- to middle-income housing [in the area]," she said. "If it is a potential historic district, they have to have a mitigation plan." The Texas Historical Commission has the final say on which areas could qualify as historic districts and thus cannot be "impacted."

Stocklin indicated she will respond to TxDOT this week with official comments on its survey, and must conduct further discussions with the agency. She also noted that TxDOT is in an awkward position during the historic review. Obviously, the agency would benefit from fewer historic properties (and fewer potentially expensive changes to the highway design), but it's given the responsibility to help identify which properties are historic and eligible for protection. "They have a vested interest in not having these properties labeled historic," she said.

Daniel Harris, TxDOT's historic preservation planner, said TxDOT officials were still in discussions with the city regarding properties south of Seventh Street. The agency hopes to complete its historic surveys of properties between Seventh and 53rd in the next several weeks, and submit those recommendations to Stocklin for city review. "I'm in limbo right now, trying to move forward but realizing the city has vital interests in these discussions," he said.

So do several Eastside neighborhood associations, and TxDOT is planning two sure-to-be-combative public meetings in January to take citizen input, one for areas south of Martin Luther King Boulevard and one for areas north. Harris said notices for the meetings will be mailed once the list of more than 300 stakeholders is finalized and meetings dates set. He noted that TxDOT hopes to complete reports documenting which properties will be affected in time for those meetings, so citizens will know if their property will be "impacted," but federal law doesn't require it.