City, Stars get their pucks in a row for Nov. 5 bond vote 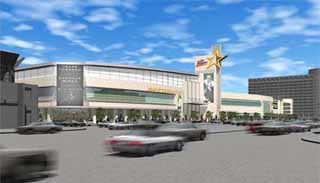 It only takes, at most, about 7,000 votes -- usually far less -- to win an election in Cedar Park. But Southwest Sports Group is thickly laying on the campaign charm to win voter approval for its ice rink/amphitheatre complex. (The "Stars and Guitars" campaign is being handled by Public Strategies, which for a small-town bond vote is like hiring Julia Child to whip up treats for the PTA bake sale.) There's the plush Web site -- www.starsandguitars.com -- and the slick promo video, and the block walkers and community meetings, and the flyers stuck to every nonmoving windshield from Lakeline Mall northward, and the full-page ads and glossy Hill Country News inserts asking "Can Cedar Park get any cooler?"

Well, uh, yeah, it can, say the smug Austin urbanites, if they even know where Cedar Park is. The same city folk might think Stars and Guitars is a twice-told tawdry tale of civic seduction -- slickers from Dallas, under the aegis of the very rich and powerful Tom Hicks, come to the hills of Williamson County and take the rubes for a public-subsidy ride.

But the city of Cedar Park, though perhaps not its citizens, enters into this tryst with eyes wide open. Unlike its neighbors in the Austin boom belt, Cedar Park is a totally new town (incorporated only in 1973) with, as Gertrude Stein might have said, not much There there. Cedar Park knows this and does not like it and has spent the last five years, much civic energy, and a lot of money trying to whip up some There. Clothed as it is in talk about "putting Cedar Park on the map," a union with Southwest Sports Group is at least a marriage of convenience for both parties.

This deal started out as just an ice rink -- glazed with the brand ID of the Dallas Stars, but still a community rec center, not a regional destination. According to Bryan Perez, executive VP of Southwest Sports Group -- the Hicks-controlled parent company of the Stars and Texas Rangers -- the company first decided to bring a StarCenter to Austin (there are four in the Metroplex) after getting panicked calls from customers of the now-defunct rink at Northcross Mall. (Despite our lack of ice, both natural and artificial, Austin is a good market for ice sports. The Stars get higher TV ratings in Metro Austin, Perez says, than in any other market outside of the Metroplex.)

But Cedar Park undertook to woo SSG, according to Perez, with a vision of something much more than a StarCenter. "They kept saying 'What else can we do here?'" he says, "And they latched onto different ideas that they felt made sense for their community." Thus begot the current proposal, which has continued to balloon even after being put on the ballot. The proposed complex, to be sited off Brushy Creek Road between U.S. 183 and Parmer Lane, now includes two rinks, one in a 6,000-seat arena with luxury boxes, and a 7,500-seat amphitheatre, which would be the largest local venue after the Erwin Center. (According to Perez, once the ice rink swelled to the point where it would need 2,500 parking spaces, the amphitheatre became "a manageable, incremental added cost.") Cedar Park would own the complex and pay the $32 million construction cost up front; about 60% of that would be covered by SSG's rent under a 25-year lease.

The Cedar Park Development Corporation, which collects a one-cent sales tax to "promote" -- that is, subsidize -- employers and booster projects, would back another $5 million of the debt. The rest ($8.2 million) would be backed by Cedar Park property taxes, hence the need for a vote -- though the city says it would have gone to the polls anyway. The 42-acre site is being "donated" by Northwest Corridor land baron Bill Pohl; it anchors his 1,500-acre Silverado project, which has languished for a while, even with the construction of a middle school and soon a high school directly across from the Stars-and-Guitars site. For his generosity, Pohl is getting a reward -- Vista Ridge Boulevard would be extended at city expense all the way to FM 1431, creating a new north-south arterial with a lot of high-visibility street frontage for Silverado. (Note: This road is not yet part of either the city or the region's official roadway plans.)

When the Cedar Park City Council agreed to put the SSG deal on the ballot (on the last day it could do so), a lot of details had yet to firm up. It didn't have a location; although Pohl had talked loosely to the press about a deal being done, the city and SSG were still weighing six possible sites, none of which it could afford to buy outright. Though the complex was designed for pro hockey, the Austin Ice Bats were publicly satisfied with the Travis County Expo Center; bringing in another team, though discussed by SSG, would be silly. (Plus, it was whispered and then confirmed, Hicks was selling the Stars.) 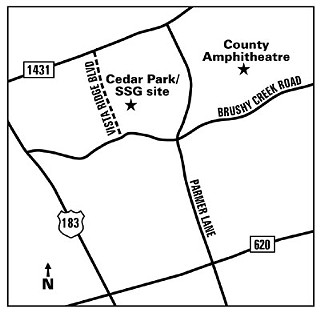 Even sillier would be building not one but two amphitheatres on Brushy Creek Road. Williamson Co. had its own plans for a venue, with up to 10,000 seats, only a mile away from the Silverado site -- and had hooked up with Tim O'Connor, Austin's big-kahuna promoter, to operate that shed. And despite the appeal to civic pride ("... the glamour of pro hockey players living in Cedar Park"), the city didn't know exactly how much, if any, money the complex would make for its coffers.

In less than a month, whether through hard work or good luck, SSG has pulled one hat trick after another, at least in the sympathetic eyes of Cedar Park boosters. The Silverado deal worked out after all, putting the complex -- which despite the trimmings is still a StarCenter at its core -- across from its logical market, the bored youth of Cedar Park. And the Ice Bats were made an offer they couldn't refuse -- if the deal passes, Hicks will buy them and move them up the hockey food chain, into the American Hockey League, to become the Stars' top farm club. They would succeed the Utah Grizzlies, whose contract with the Stars expires in 2004, just as the Cedar Park facility would open.

Suddenly, the Bats were no longer so content at the Expo Center -- leaving Travis Co. commissioners, who spent $4 million on air-conditioning to make that barn ice-friendly, at best nonplussed. Assuming Hicks sells the Stars, the Ice Bats and the Cedar Park lease would go with them. The memorandum of understanding currently on the table -- the foreplay to a final contract if the bonds pass -- does not memorialize this actual deal with the Ice Bats, but commits the Stars to fielding an AHL team in Cedar Park. That's assuming the MOU is actually a "commitment." The city of Dallas also thought it had a "commitment" from Hicks (and Mavericks owner Mark Cuban) to operate aging, costly Reunion Arena in return for the city's backing bonds for the new American Airlines Center. The city thought wrong.

As for the money, SSG and the CPDC produced, on cue, a study from Angelou Economic Advisors showing a windfall for Cedar Park. Actually, though, the scenario isn't that rosy -- most of the city's new sales tax revenue (close to $1 million a year once the project is "mature") would come on-site, from ticket sales and skate rentals and parking fees and so on. The Angelou study says Cedar Park won't break even on the deal until 2009, and that the real bonanza potential would come from "add-on" development -- new restaurants, shops, maybe a hotel. (Perhaps at Silverado.)

But the Angelou study assigns great weight to the "intangible" benefits of putting Cedar Park on that proverbial map and assuaging the city's Dell Diamond envy. However, Round Rock's contribution to the Express consisted of the land (in Old Settlers Park) on which the Diamond is built and a pledge of receipts of hotel/motel occupancy tax. That is, other people's money. Cedar Park wants to spend its citizens' own money -- on top of the sales tax (passed in 1999) that backs CPDC projects, and the property taxes backing bonds (approved in 2001) for new roads (including, perhaps, Pohl's Vista Ridge driveway) and new parks and a new downtown and the other fruits of the push since 1997 to put There there.

Dell Diamond has been a bonanza because Round Rock already has hotels, shops, restaurants, and the like. The same is true of Frisco, the Dallas 'burb where SSG is building a deluxe StarCenter much like the Cedar Park proposal. Though the city of Frisco is putting up substantially more money, it should recoup more quickly because Frisco is crammed with retail, whereas Cedar Park is little but rooftops; its per capita sales tax collections are less than one-third of those in Frisco or Round Rock. (Lakeline Mall and its surrounding hot corners, where Cedar Parkers do their shopping, are actually within the Austin city limits.) "There's a lot of room for growth" in Cedar Park's sales tax base, says Angelou consultant Chris Engle.

Absent that growth, the real moneymaker here for the city -- about a third of Cedar Park's total return -- is the amphitheatre, even though it'll only be open 30 nights or so a year. Even if Hicks sells the Stars, SSG will keep the lease to the amphitheatre. As it happens, Hicks is also a vice-chairman of Clear Channel Worldwide (he sold them his own radio stations in 2000), which in addition to being the Wal-Mart of radio (they own seven Austin stations, 1,225 nationwide) dominates America's under-the-stars concert business. And Williamson Co. quickly came up with a Plan B for its own Brushy Creek shed. "We'd scale back to a more regional facility -- a trailhead, a running center, a 1,500-seat amphitheatre," says Williamson Co. Commissioner Mike Heiligenstein. "I'd love to do a bigger one -- I think we'd do a better job, that's more what Austin needs and what Austin's all about -- but I'm realistic about what we can do up against Clear Channel."

Despite having all its pucks in a row, SSG still has to contend with the voters of Cedar Park -- who live in Williamson County, after all, with its definite notions about taxes and free enterprise and public priorities. Before setting the ballot, the city commissioned a poll showing a narrow majority of citizens would vote against the project -- and publicized the results, reflecting either naiveté or some calculation too clever for all but Tom Hicks to understand. And so SSG is pouring it on for a deal that, in any practical sense, is less important to them than it is to Cedar Park. "If someone's going to vote against us, I'd rather they do so based on the information," says Perez. "So we're doing whatever we have to. It's kind of a commitment to the city. They need to see how we'll act when we operate this thing. It's a good indication that we're not going to cut corners."