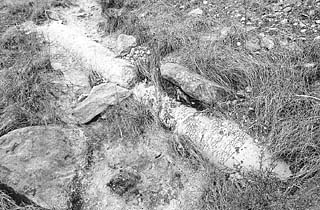 An exposed portion of the Longhorn Pipeline (Photo By John Anderson)

Would Austin's proposed pipeline safety ordinance carry more bite had the city ever -- heaven forbid -- experienced the horror of what some communities have witnessed firsthand? Judging from regulations now on the books in those cities, the answer is yes. But to Austin's credit, local officials are trying to get an ordinance in place as a precautionary measure, to minimize damage in the event of a pipeline catastrophe.

The proposal, currently on the public hearing circuit, would regulate new construction along hazardous liquid pipelines of eight inches or greater in diameter. The most controversial of the lines, the yet-to-be activated Longhorn Pipeline carrying gasoline from Houston to El Paso, was the catalyst for the proposed ordinance, but there are three other active pipelines in the area. Two are owned by Shell and Phillips and run east-west, nearly parallel to the Longhorn line; and a third, owned by Koch Petroleum, runs north-south, east of I-35.

Austin's draft ordinance seemed to materialize rather reluctantly on the city's part. Last summer, opponents of the proposed Stratus Properties development deal with the city questioned the wisdom of allowing a Stratus multi-family project to be built adjacent to the Longhorn Pipeline. In turn, some City Council members and Stratus proponents charged that activists raised the pipeline issue merely to try and thwart approval of the development. (Never mind that the original Stratus agreement contained no mention of the pipeline, which cuts directly across one of Stratus' tracts.) In any case, the Stratus brouhaha forced the city's hand on drafting an ordinance that would regulate future development near hazardous pipelines.

It took something much more volatile than a development conflict to put pipeline safety ordinances into place in other cities. Redmond, Wash., did not regulate construction near pipelines until a 1999 rupture in nearby Bellingham killed three people and spewed 250,000 gallons of gasoline into creeks. Earlier this month, the Redmond City Council adopted strict guidelines on development near a 400-mile gas line that runs through portions of the city. Similarly, Edison, N.J., established firm building controls after a 1994 pipeline explosion destroyed eight apartment buildings, killing one and leaving thousands homeless. Outside of U.S. borders, Canada and the United Kingdom have enacted very strong regulations for hazardous liquid pipelines.

The newly enacted Redmond ordinance came together after months of community input, says Lori Peckol, a Redmond city planner. Interestingly, no strong opposition from the development community emerged during the process, she said, in large part because much of the city of 46,000 residents is already developed. "The primary concerns were from property owners who wanted to subdivide larger parcels. We did not specifically seek out [the development community]," said Peckol. "We concentrated on property owners."

The Redmond ordinance calls for a 500-foot setback between the pipeline and new "high-risk" developments, such as schools, nursing homes, and hospitals, and a 25-foot setback for other new structures. That's two and a half times farther than what the Austin ordinance would allow.

Austin political consultant Mike Blizzard, often credited (or blamed, depending on one's point of view) for first raising the pipeline issue during the Stratus hearings, says he's happy the city is moving toward adopting an ordinance, but that the existing draft is too weak. "Maybe that's not fair, since many communities are doing nothing," he says. "But when communities do set limits on all development, it is far further back than 10 feet, and when they do set limits on more sensitive development, it is far further back than 200 feet."

In the eyes of developers, however, 200 feet is a heck of a lot of real estate. "No matter how you look at it, this is an important issue, with fairly large amounts of land involved," said Harry Savio of the Texas Capitol Area Builders Association. But he said his group will undertake some independent research before taking a position on the proposal. Likewise, the Real Estate Council of Austin is following the process closely but withholding judgment for now.

Perhaps the strictest language in the ordinance -- that pipeline operators carry $50 million in liability insurance -- might not even be legally enforceable in light of a recent court ruling that local jurisdictions can't regulate federally approved pipelines. At any rate, Austin's draft proposal is still several weeks away from becoming a done deal. "We're still educating the public and still getting input from people," said Assistant City Manager Lisa Gordon. "What most people want now is more information."

In that vein, the next public hearing on the proposal is Oct. 28 at Langford Elementary, followed by a Nov. 4 hearing at Bowie High School. Both start at 6:30pm. The draft then goes to various boards and commissions before landing in the City Council's lap some time in December. More details are available on the city's Web site, www.ci.austin.tx.us.