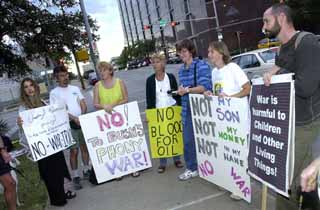 Within hours of Congress approving President Bush's war resolution last week, protesters were on the streets, albeit not the several hundred that turned out for the Oct. 5 rally. (Photo By John Anderson)

: "Maybe insurance companies are like men. The worse you treat them, the more they come back." -- State Sen. Leticia Van de Putte, D-San Antonio, on why insurers give her campaign cash when she typically supports pro-consumer measures

Early voting for the Nov. 5 election starts this Saturday, Oct. 19 (see Running to the Middle).

Not one, but two big deals for East Austin, as a major "live/work" condo complex and UT's new charter school head for the neighborhood (see Condos, Charter on E. Sixth?).

After years of fundraising and arguing, UT will finally break ground Saturday on the new Blanton Museum of Art. We gotta wonder: Will Tony Sanchez be there to see what he wrought?