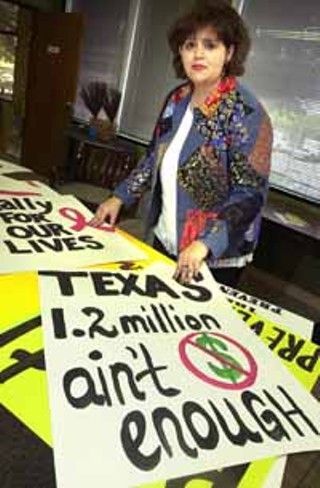 With the state's controversial new distribution process for funding HIV/AIDS prevention programs, Latinos and other communities that came up empty-handed could represent the highest numbers of AIDS cases in the next five years, leaders of local community groups charge.

In a move that caught many organizations off guard, the Texas Dept. of Health last month announced drastic changes in its 2003 funding for prevention programs. This year, TDH decided to "follow the epidemic" by targeting populations with the highest risks for contracting the HIV virus. As such, TDH allocated higher levels of funding to fewer agencies and shut out some agencies altogether. TDH based its decision on a Centers for Disease Control mandate to target specific population groups for "data and science-driven" prevention programs.

In Central Texas, as in other parts of the state, African-Americans represent the highest-risk group, according to Casey Blass, director of TDH's resource division for HIV and sexually transmitted diseases. As such, TDH established three target African-American populations showing the greatest need for highly specialized prevention efforts: heterosexual women, gay men, and intravenous drug-using females. Locally, Austin Outreach and the Austin/Travis Co. Health and Human Services (in partnership with AIDS Services of Austin and CARE of Travis Co.) were the only agencies to get funding for prevention programs.

Other local community-based organizations such as the Austin Latino Lesbian/Gay Organization got no funding in this allocation round. With almost a third of its budget wiped out by the state's decision, ALLGO may be forced to close its doors unless some other financial alternative comes along, said Executive Director Martha Duffer. The 15-year-old social service and cultural organization provides (among other services to the Latino gay, bisexual, and transgender communities) HIV/AIDS prevention programs for Latinos and other gay men of color, reaching an estimated 4,000 men each year, Duffer said.

In light of the funding disparity, representatives from groups who did get a share of TDH money are equally dismayed over the department's decisions. "Activists have for years fought for culturally specific programs, so nobody is angry that the money went to the African-American community," said Jennifer Herrera, director of prevention at AIDS Services of Austin. "But the process is skewed when you fund one community and completely ignore everybody else. Our goal has always been to work ourselves out of a job, but there is something really wrong with cutting funding when Texas still ranks No. 4 in the nation" in the number of documented AIDS cases. AIDS activists from across Texas aim to drive home that message at a "Rally for Our Lives" demonstration from 4-7pm Saturday, Oct. 19, on the south steps of the Capitol.

"We're hoping the Legislature will intervene and say this [process] is not okay," Duffer said. ALLGO's existing TDH funding runs dry in December, but the group had assumed that its contract would begin anew Jan. 1. ALLGO had asked TDH for $300,000 to fund its prevention efforts for the next five years, but realistically expected no more than $150,000. "It never occurred to me that they would not give us anything," Duffer said.

Because ALLGO is so deeply entrenched in the Hispanic community, Duffer fears grave consequences if the group has to discontinue its outreach services. "What will the gay Latino community look like after five years with no prevention efforts?" she asked. She also takes issue with TDH's decision to deny funding to the group based on its application, which apparently didn't measure up to others in the competitive process.

Blass, of TDH, defended the award process. "You're going to have longtime players who don't compete well in a competitive process," he said. The process was made all the more competitive this year because of the new CDC funding requirements. But, Blass added, "we will work with ALLGO and other organizations to help them find alternative funding sources."

Starting with the same amount of funding -- $10.7 million -- as in the previous budget cycle, target populations were selected by six different community-planning groups composed of various stakeholders across the state, Blass said. The planning groups were charged with examining local data to determine which high-risk populations were to be singled out for "scientifically proven" prevention programs. These programs are more resource-intensive, and therefore more expensive, Blass said, but because the selected populations constitute miniscule numbers in some areas, some prevention contractors will be allowed more flexibility in providing prevention services to other communities, "as resources permit."

"The truth of the matter," Blass continued, "is that we've been unable to fund [some] populations across the state for a long time. That's nothing new. But our planning and priorities are so different this year, and that brings the funding process into sharper focus."

Blass' explanations offer little consolation to ALLGO leaders. "Latinos have such an extraordinary presence in Texas that the funding cut has impacted the entire state," said Carole Metellus, an ALLGO case manager. "It's just devastating."

You can find more info on Saturday's rally at www.allgo.org. The TDH Web site, www.tdh.state.tx.us/hivstd/, provides additional information on the process.