"It's Extremely Easy to Frighten People"

An interview with Noam Chomsky 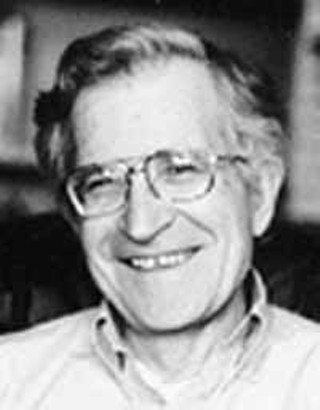 Noam Chomsky, distinguished professor of linguistics at M.I.T. and author of many books on international politics, U.S. foreign policy, the Middle East, and the ideological structure of Western media (Manufacturing Consent with Edward Herman, 1988), will address the 12th Annual Civil Rights Dinner of the Texas Civil Rights Project on Saturday, Oct. 19, and deliver a public lecture at the LBJ School Auditorium Sunday at noon. He spoke to the Chronicle by phone on the morning of Oct. 7, prior to the George W. Bush address that evening on the conflict with Iraq.

To what do you attribute the current administration pressure for a large-scale war? Noam Chomsky: It's certainly not for the stated reasons. Saddam Hussein is no more dangerous now than he was four years ago, and certainly not more than 12 years ago, when George Bush the First was happily providing him with the means to produce weapons of mass destruction, at a time when he was far more dangerous than he is today. And incidentally, you'll probably hear tonight in the speech about Saddam Hussein's terrible crimes -- gassing his own people, using chemical weapons of warfare, and so on -- all of which are true. But what you won't hear in the speech are the three little words: "with our help." Because Reagan and Bush continued to support him right through that period, they felt there was no big problem, and indeed they continued to provide him with the means to develop weapons of mass destruction. ...

So that can't be the reason. The question is, why the timing? I suspect the timing has to do with two factors. One, the Bush administration has seized on the war on terror just as the Reagan administration did before it -- it's the same people, the same rhetoric and so on. They've seized on that as a means of doing exactly what they say in the National Security Strategy document [released by the White House Oct. 23]: trying to extend world domination, in which the U.S. will be the world's dominant power. That's what they've always wanted, and that's what they want now. But they need a victory. They did whatever they did in Afghanistan, but now you've got to go and do something else. Iraq's an easy target, defenseless basically -- nobody's going to defend Saddam Hussein, he's a monster. So you can smash Iraq pretty much the way the Reagan administration kept pummeling Libya.

But more important than that is the domestic problem. The Bush administration is carrying out a significant assault against the American population. They very quickly drove the country into a big deficit, just the way they did when they were running the Reagan programs 20 years ago. That means that social spending will have to be cut back, which is in fact their main purpose -- but that means there will be a serious cutback in health care, education, infrastructure development, protection of the environment, and so on. But people don't like that sort of thing -- it harms them. This is an assault on the general population for the benefit of very small sectors of power, and you have to keep people's attention away from that. The best way to do that -- everyone knows this, whether it's a democratic leader or a military dictator -- the best way to keep people's attention away from what you're doing to them is to frighten them.

AC: This particular strategy has a large chance of backfiring into wider war. Do you think this war strategy has some rational logic even from an imperial perspective?

NC: Yes, I think it has a logic. You're quite right, it could blow up, but that's always true. This is the 40th anniversary of the Cuban missile crisis -- what Khrushchev and Kennedy were doing then could have destroyed the world -- they came pretty close. And the same is true over and over. But in the present case, I think the hawks, the Rumsfelds and Cheneys and the rest, have a reasonable expectation that their means of violence are so overwhelming as compared with any possible adversary, that not too much can go wrong. And if anything does go wrong they have plenty in reserve. That's their calculation, and it could be right.

AC: Do think that opposition from ordinary citizens is stronger than it was 30 or 40 years ago?

NC: Overwhelmingly. The country's just very different than it was 40 years ago, or even 20 years ago. There's a lot more opposition to violence and aggression. Again, go back 40 years: This also happens to be the 40th anniversary of the public announcement by the Kennedy administration that the U.S. Air Force was bombing South Vietnam, that it was destroying food crops, that it was driving people into what amounted to concentration camps. There was no protest of the war [at that time]. Now the country has changed enough so that substantial protests take place even before a war, not seven years later. ...

AC: Do you think that the opposition now is strong enough to make some difference in the short term?

NC: I doubt it. I hope so, but I don't think so. It's very hard. It's extremely easy to frighten people -- it's hard to explain to them, to get people to understand that the fear is manufactured. ... When Rumsfeld gets up on television and says we have definitive intelligence that al Qaeda is working with Iraq, how is an ordinary citizen supposed to react? They won't tell you the evidence, and when anyone asks, they say, "Well, you know: It's secret. ..."

AC: Can any coalition of other states provide some kind of counterweight to U.S. power?

NC: This is an open question. ... But I don't see any particular signs of it. The U.S. military preponderance is so overwhelming -- there's never been anything remotely like it in history -- that people are frightened. It has been pointed out ... that the current Bush administration policies are compelling countries to develop weapons of mass destruction as a deterrent. They can't stop the United States by conventional forces.

Remember, weapons of mass destruction don't mean missiles. It's been understood for years, long before September 11, that it wouldn't be very hard, say, to smuggle parts of a nuclear weapon into a hotel room in New York and put it together, in addition to a whole number of other options. Technical papers have been saying "national missile defense" is a joke for exactly that reason. No country is going to be crazy enough to launch a missile attack on the United States -- they'd be wiped out in three seconds. ...

I expect that what will happen -- what Bush will say tonight -- they want to get a strong resolution through the U.N. Security Council. The resolution will in effect authorize the United States to go to war whenever it feels like it, although it won't say those words. And I think they'll get it through. Britain goes along automatically; France isn't going to make a huge fuss. France and Russia are worried about their oil contracts in Iraq, but it's certain that the U.S. is making deals with them now to assure them that they'll get a share of Iraqi oil after the U.S. takes control of it. They'll back off, and China's not going to do anything -- so they've got the resolution.

AC: What do you see as the most likely scenario over the next few months?

NC: I don't have any special knowledge, but I tend to go along with the military journals and military analysts, who are pretty reliable. ... The overwhelming consensus seems to be that the U.S. will go to war probably in January and February. Timing is important -- it has to be over the winter, because it's hard to carry out a war there in the summer heat. And they can't let it go until the next year because it will interfere with the presidential election campaign. They have to have a victory notched on their belt before the presidential campaign. That is going to be extremely important, because the timing of the Bush tax cuts was arranged so that the main hit will be after the 2004 election -- and they surely don't want that to be coming up during the campaign. What they want to be coming up will be, look, we won a victory over Iraq, aren't we great? But don't forget this isn't the last step. The next one will be Iran -- that's already started. Syria -- again, that's already started. You can have quite a string of these things to keep people frightened, and to expand control -- until there's a reaction somewhere. The reaction ought to be inside the United States, but that won't happen if people are terrified.

AC: And in the Middle East itself, especially if Israel gets involved, won't their unhappy coalition with other states begin to break up?

NC: Unless the U.S.-backed dictatorships in the Gulf can control their own populations, which they may be able to.

AC: And these guys in Washington are willing to take that risk?