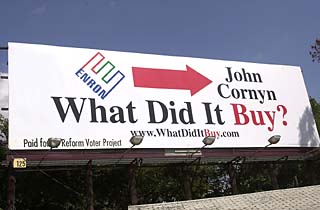 The Reform Voter Project, a national campaign finance watchdog group, launched a billboard campaign in Texas this month reminding voters of the massive amounts of cash Enron poured into the campaign coffers of Rick Perry and John Cornyn. Gov. Perry is now running to keep his office, and Attorney General Cornyn is running for U.S. Senate. The Reform Voter Project purchased billboards in Austin, Dallas, and San Antonio. (Photo By John Anderson)

Austin Lege candidates will appear at a forum on education issues tonight (Thursday), 7-9pm at the AISD Carruth Administration Complex, 1111 W. Sixth, Room B-100. The forum will also be broadcast live on Time Warner Cable Ch.22.

Nineteen-year-old UT student Johnathan Flobek was killed, allegedly in a fight with another student. A much older murder case -- the 1988 slaying of Nancy DePriest, for which the wrong men were originally convicted -- went to trial for the second time this week: See Austin Stories.

Justice for All (not the Houston death penalty advocates but the Kansas anti-abortion campaign) sued UT over its speech polices, saying the group's rights were violated last year by restrictions on its campus anti-abortion display.