Room at the Top?

This is the first of three Chronicle thumbnail previews of the Nov. 5 election. This week, we examine the top of the Travis County ballot, from U.S. Senate down to Railroad Commissioner. Next week: State judicial races, State Board of Education, and local Legislature contests. Oct. 25: County and other local races.

Although it's a sanctimonious truism (except on the

Chronicle's "Page Two") to denounce the influence of campaign cash on politics, there is one reason Texans this year have competitive races at the top of the ballot: money. Most of it comes from one pocket -- that of Democratic gubernatorial contender Tony Sanchez -- to be spent in the vast quantities necessary to run a media-driven campaign in a state this large. If the Texas Democratic Party had not convinced Sanchez to come down from the corporate mountain with his checkbook, the Dems wouldn't stand a chance. Moreover, with an unanticipated shot at an U.S. Senate seat, the national Democrats are actually spending money in Texas, instead of (as usual) raising it here and spending it elsewhere.

As of this week, Sanchez ($54 million) and Perry ($15 million) have already broken all records for spending in a Texas campaign. Be warned: If you watch baseball or football, TNT or tiddlywinks, Sanchez and Perry, Ron Kirk and John Cornyn, David Dewhurst and John Sharp, and all the rest will look you straight in the eye, applaud your down-home values, and promise to fix all the state's problems without spending another dime. 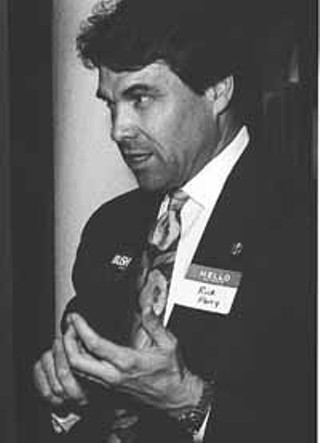 This means hang on to your wallet. As you do, look for the following nuances amid the blitz.

Moderate-conservative Democrat Ron Kirk (former mayor of Dallas) and conservative-moderate Republican John Cornyn (outgoing attorney general) have entertained voters for weeks with flag-waving displays over terrorism and Iraq. Cornyn, unfortunately for him, called for calm and flexibility on the very same day his hero, President Bush, had announced several alternatives: war, war, and war. Meanwhile, Kirk nearly ruptured himself climbing onto the battlewagon. Iraq is a "good issue" for the GOP; Kirk (and the national Dems) want to cut losses among conservative swing voters while bringing out traditional Dems in record numbers -- wage workers, union members, teachers, and a bumper crop of minority voters.

The Green Party's Roy Williams is a long-time Dallas racial justice activist who led the fight there for single-member council districts; he left the Dems in disgust in reaction to the 2000 presidential campaign. Libertarian Scott Jameson is a university tech manager who advocates lower taxes, privatizing everything, and reducing police power. Curiously enough, this year the Greens and Libs agree on the folly of an Iraq war, although for opposite reasons.

Neither Travis Co. congressional race is a real contest: Both incumbents -- Dem Lloyd Doggett (Dist. 10) and the GOP's Lamar Smith (Dist. 21) -- are in safe districts made safer by redistricting. Doggett has only a Libertarian opponent (Michele Messina). Smith, of San Antonio, is a new name on Travis Co. ballots, now representing westsiders formerly represented by Doggett or GOP Rep. Ron Paul. (The Austin metro area is now split between five congressional districts.) Smith is a quiet, pleasant fellow who generally gets 100% ratings from hard-right organizations and is especially active (and reactionary) on immigration issues. His Dem opponent, teacher John Courage, is working hard, but very uphill, to build name recognition (it is a great name) with a campaign that is progressive on most issues: health care, Social Security, education, women's rights.

Perhaps you've heard of these guys. Rick Perry is the GOP incumbent (by inheritance) with very good hair and a very heavy veto stamp. Tony Sanchez is the bootstrap oilman, banker, and Bush Pioneer now bearing the Dems' standard on education, the budget, health care, and (with a great recent flourish) homeowners' insurance. Although Perry remains the favorite, the latter may become Sanchez's wedge issue; it's not hard to explain to middle-class homeowners -- the key voters for both parties -- what will happen if their most basic investment is undermined.

The Greens' Rahul Mahajan, a writer and physicist, is primarily known as a peace activist, but his campaign has also stressed cutting corporate power and promoting environmental protection, criminal justice reform, and economic fairness. Libertarian Jeff Daiell advocates reducing government in all areas to a very bare minimum -- including doing away with licensing for doctors.

Dem John Sharp, then state comptroller, came within a whisker (0.4%) of defeating Rick Perry (and thus being governor now) in 1998, but Perry got a last-minute funding injection from hard-right San Antonio tycoon James Leininger. The GOP candidate, Land Commissioner David Dewhurst, is inexperienced and amateurish, and (as was said of Phil Gramm) even his best friends don't like him. Normally conservative business groups (and Nolan Ryan) have endorsed Sharp because even the right is afraid of having Dewhurst in the Lege's most powerful seat. But Dewhurst, like Sanchez, has money to burn; though he'll have to burn a lot just to maintain the built-in GOP advantage. If the Dems manage to get out their vote, and if voters remember Sharp from his years in office, he should do fine.

Especially for locals, the Attorney General race sparks interest, as our dapper and politically deft former Mayor Kirk Watson (the Democrat) takes on former Supreme Court Justice Greg Abbott, the most reliably pro-corporate vote on the consistently pro-corporate court. Current word is that Abbott's campaign is in disarray, and he's been hurt by charges of hypocrisy on the all-consuming (for the GOP) question of tort reform. Despite being a vigorous foe of plaintiffs' lawyers (like Watson) and their torts, Abbott himself won a $10 million personal-injury settlement stemming from the 1984 accident (a tree fell on him) that left him paralyzed. Settlements like Abbott's are no longer possible in Texas, thanks in part to Abbott's own tort-reform rulings on the Supreme Court. (Abbott's own lawyer leaked the 1984 settlement to the papers.) The insurance crisis also favors Watson over Abbott, whose current law firm specializes in insurance defense.

The Rest of the Icing

Whoever wins at the top of the ballot will likely dangle their coattails from the AG's race on down. For comptroller, incumbent Carole Keeton Rylander (another 1998 beneficiary of Leininger's largesse) faces former UT quarterback Marty Akins ... What did Texans do to deserve this? (El Paso activist Ruben Reyes is the Green.) For land commissioner, choose your weapon: As an otherwise rational state senator, GOP candidate Jerry Patterson made a dubious career of promoting concealed handguns. His Dem opponent David Bernsen, also a former state senator, has been a solid moderate. Their plans for the state's water, air, and beaches look much the same. For ag commissioner, long-time Dem Rep. Tom Ramsay offers a likable East Texas alternative to hard-nosed GOP incumbent Susan Combs, with the Green Party's Jane Elioseff as a dedicated environmental activist holding out for the ideal. Finally, incumbent Railroad Commissioner Michael Williams promises very much more of the same -- most recently he advocated the parlous prospect of ending state regulation of hazardous railroad cargo. Democrat Sherry Boyles proposes merging the RRC with the Public Utility Commission to form an agency focused on energy efficiency and environmental protection.

Overall, the Republicans are counting on their traditional advantage among the most dependable voters to reinforce their stranglehold on statewide offices. But Texas Democrats feel that, for the first time in years, they have had the resources to reach out to swing voters and mobilize an effective statewide get-out-the-vote campaign. Both the Green and Libertarian campaigns -- shaving their votes from the left and the right -- are aiming for a 5% showing in any statewide race, or 2% in the governor's race. That's enough to keep the party on the ballot next time.

Download a PDF file of the November 5 ballot from Travis County's Web site.