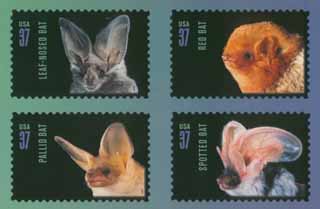 The U.S. Postal Service and the Austin-based Bat Conservation International have teamed up to honor the noble bat in a new series of stamps. The stamps were designed using photographs taken by BCI founder Merlin Tuttle. (Ironically, however, none of the featured bats are the Mexican freetail, the species of the famed colony living under the Congress Avenue bridge.) The stamps are now available at post offices everywhere.

Michael Scott received a life sentence for his role in the yogurt shop murders (see Scott Locked Down).

Austin Congressman Lloyd Doggett blasted President Bush's drive for war against Iraq, and at press time there was some positive movement in Congress against the White House request for a supporting resolution (see War Drums).

Testimony was suspended in the APD/Timothy Enlow arbitration case, as a state district judge granted a temporary restraining order to allow cameras into the hearing -- an order to be contested Oct. 4 (see Matters of Perception).

Hurricane Isidore mostly missed Texas, and was turning toward New Orleans as of press time.